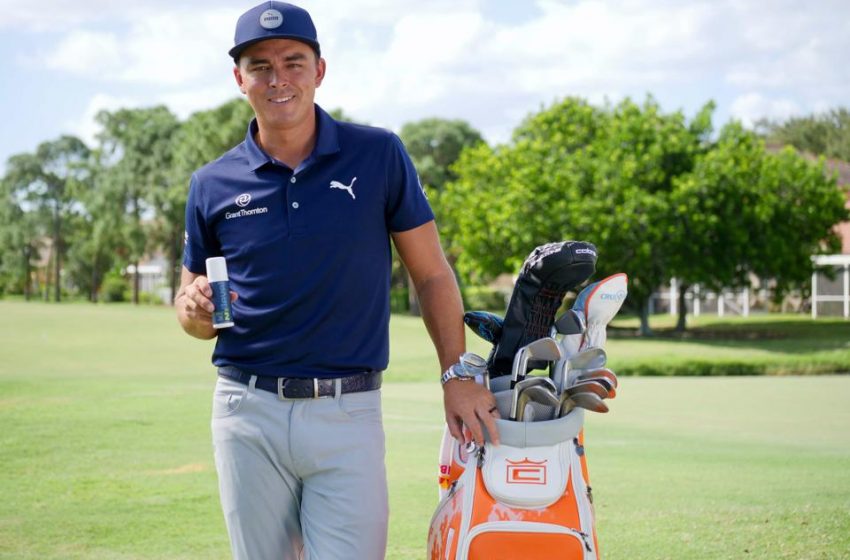 Last week Rickie Fowler visited Nashville for the first time on a couples’ trip with Jordan Spieth, Justin Thomas, Smylie Kaufman and their respective others. They stayed down at Troubadour Golf & Field Club, a tony Discovery Land Company property outside the city where JT has a place.

“It was a perfect little three-day trip—play some golf, hang out with friends, and check out a Predators game,” Fowler says when reached by phone. “Being on the glass in a hockey game or really anywhere in the arena, you’re not far removed from the action and there’s always something going on.”

While the 5-time PGA Tour winner admits he’s not the most knowledgeable hockey fan, he appreciates the pace of play and ranks the fastest game on ice near the top of his favorite sports to catch live, right behind supercross.

“It’s definitely something I try to go to as much as I can which unfortunately isn’t enough,” Fowler says.

Rickie has had a rough ride between the ropes of late but he’s been showing signs of snapping out of his year long slump. The 32-year-old golfer, who had eight missed cuts in 2020, saw his streak of 42 consecutive major championship starts come to a thudding halt when he failed to earn an invite to this year’s Masters tournament. But he appears on the cusp of turning the tide after a pair of top 20 finishes in his last five starts.

“Things over the last couple months have started heading in the right direction. It’s been a big struggle and there are a lot of words to describe it but not really a stretch that you’d wish on anyone,” Fowler says.

“It’s been a learning process, definitely humbling and that’s what the game of golf is, but it is nice to kind of see things trending the right way, digging ourselves out of this hole and looking forward to getting back to playing and being in contention.”

The downturn in Fowler’s leaderboard fortunes has not slowed Rickie’s roll as a marketable pitchman.  The fan favorite with the chiseled features and robust brows has an endorsement roll call deeper than the L.A. Clippers bench. Last summer Level Select, which bills itself as a seed-to-shelf CBD company, joined Cobra/Puma, Farmers Insurance, Mercedes-Benz, Grant Thornton, Rocket Mortgage, and TaylorMade in hitching onto the Rickie train.

“The biggest selling point for me with Level Select was the quality of products and them controlling every step of the process from growing their own plant to the extraction process to the bottling. They’re in control from start to finish,” Fowler says.

The PGA Tour’s recently unveiled Player Impact Program(PIP) is an annual bonus plan that divvies out $40 million at the end of the season to the 10 biggest needle-movers based on media mentions, Q Rating and a host of other popularity gauging metrics. $8 million will go to the player that tops the impact rankings with the payouts getting smaller on down from there.

“I think it’s great. I’m going to need to start playing better to make sure my Q Rating and all those metrics match up to where I can be in the top ten. If I’m not playing well, and not actually on TV that doesn’t do me any favors,” Fowler says.

Last year the PGA Tour renewed their domestic TV rights deal for non-majors with incumbent networks CBS Sports, NBC Sports and ESPN for a reported $680 million. The new pact which runs from 2022 to 2030 eclipses the previous broadcast deal by 70%. Earmarking revenue to assuage their most marketable players has been viewed as a move to fend off the challenge posed by the Premiere Golf League, a Saudi backed upstart keen on syphoning top talent. While the PGL may never actually tee off, the proposed league’s promise of a guaranteed payday for golf’s biggest fan draws seems to have resonated with PGA Tour brass.

Opponents of trickle-down economics may find it gauche to give bonuses to the most popular and therefore already well-off players, but rewarding fan favorites makes business sense.

“Tiger is the easiest one to make an example of—if he’s at a golf tournament, ratings go through the roof,” Fowler explains.

“When he’s on TV, people want to see him play. I’m not saying that anyone can move the needle like him but there are other guys out there that people enjoy watching play and want to see play.  JT, Rory, Jordan…you can name off a handful of guys that are top players in the world. They are the ones people go watch whether they’re walking at a tournament or taking it in on TV.”

The PIP could also inspire players in the mix looking to improve their position and those just outside the payout bubble to come up with creative ways to engage more with fans on social media.

“You know it could. There are a few guys out there that don’t really do social media. But it will incentivize guys to push to grow their brand a little bit more in other ways that they maybe weren’t focused on. It’ll be interesting to see if there are guys in the next couple years that try to do some different stuff to get more exposure,” Fowler says.

After spending 2020 tweaking and optimizing his swing with his coach John Tillery, Fowler’s current focus is on reaping the benefits of all the work he put in.

“Growing up on a driving range back home, I used to just hit shots and try to picture myself in certain situations, using creativity, and not just working on the swing,” Fowler says. “That’s going to be a bit more of the focus going forward. We’ve put the time in on the swing and know what needs to be focused on,” Fowler says.

Now it’s time for him to get back to just playing the game, hitting golf shots and having fun. The Wells Fargo Championship in Charlotte at Quail Hollow, a course that’s very much in his comfort zone, tees off in a couple of weeks. This is where he won his first PGA Tour tournament back in 2012 and he finished T-4 in 2019, the last time the event was held.

And to the middle-aged Rickie fans fretting whether they may be too old to pull off the golfer’s flat billed hat style while rooting him on—he’d be the first to tell you that Millennials and Gen Z-ers don’t own the look.

“You can wear them forever. That goes back to the motocross and supercross industry, that’s where all that came from for me. I’m not saying that action sports or riding dirt bikes is for every age, but the inner kid or inner action sports part of you—that never leaves.”

Simon Chadwick | Tokyo 2020 is not the first ‘geopolitical