Covid-19 is wreaking havoc on the market for risky municipal bonds. Investors desperate for tax-exempt yield are still piling in.

Fixed-income returns that come with a tax break have become so precious to affluent American households that they are willing to overlook a spike in defaults, growing reports of repayment trouble and contagion risks of communal living projects.

The S&P Municipal Bond High Yield Index is now only about 1% lower than its pre-coronavirus pandemic level, despite falling 15% in March as global shutdowns roiled the market.

The Federal Reserve stepped in at that time to backstop a variety of assets including municipal bonds, resetting investor expectations about how much risk the pandemic poses to a range of markets from stocks to commodities to corporate and muni debt. 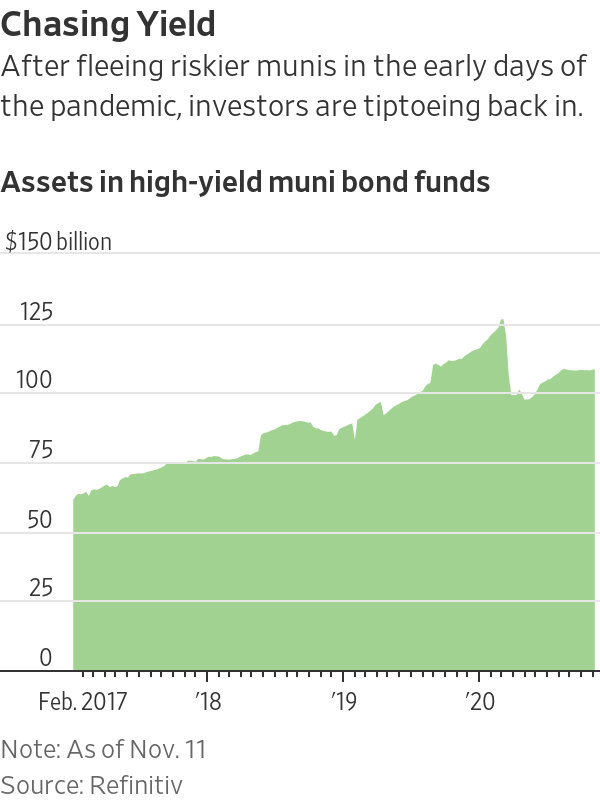 Since then, investors have added a net $10 billion to high-yield muni mutual and exchange-traded funds, bringing the total assets under management to $109 billion, according to Refinitiv.

For decades, muni bonds have been sold by state and local governments to build schools and pave highways. But as yields have fallen and the tax benefits of munis have grown for many households, the staid securities have increasingly also financed more speculative ventures, backing senior living facilities, dorms and innovative recycling plants. These borrowers pay far higher returns than towns or school districts with the power to collect taxes because they are dependent on their own revenue to make debt payments.

High-income households bought up more and more of that high-returning debt after the 2017 tax law overhaul capped their state and local tax deductions and drove up their tax bills.

One deal snapped up by investors last year financed the collection of silica from the site of a defunct 1930s gold mine in Congress, Ariz. The compound is sold to golf courses and farms as a soil additive and it is used in metal refining, said George Rieger, chair of the project’s sole bondholder, Greenwich Investment Management.

The borrower made a full November payment but only paid half of what was owed in August.

Still, Mr. Rieger said, the 2020 return remains well above typical munis. The project was financed with $22 million in muni debt, about three quarters of it tax-exempt, with yields ranging from about 7% to 14%.

There have been about 50 first-time defaults in the past six months among municipal borrowers classified as risky by Municipal Market Analytics, the most since the aftermath of the last recession. But there are many more speculative bonds now than there were then. Outstanding junk-rated and unrated debt has grown by nearly 20% since 2012 and now makes up about a tenth of the roughly $4 trillion municipal market, according to Municipal Market Analytics. 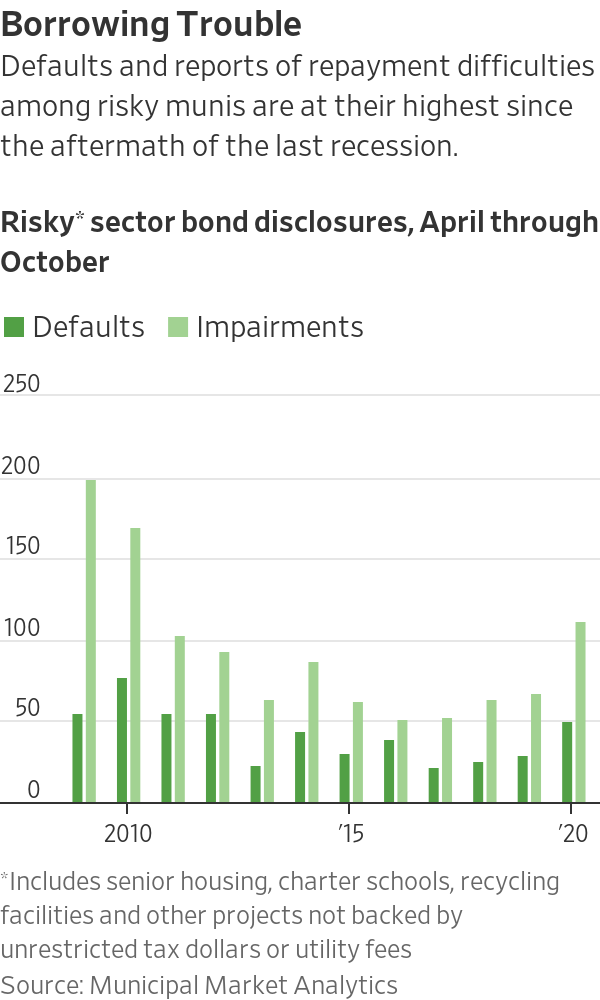 Much of the high-yield debt issued over the past several years is so risky and complex that, unlike run-of-the-mill school and highway bonds, it is not sold directly to typical individual investors in small quantities and must instead go to money managers or other institutions.

Issuance of muni debt reserved for so-called “qualified institutional buyers,” defined by the U.S. Securities and Exchange Commission as sophisticated investors such as asset managers, insurance companies and pension funds with more than $100 million under management, grew 87% to $23 billion between 2016 and 2019, according to an analysis of Bloomberg data by Pacific Investment Management Co.

One such bond issuance was a $228 million 2017 deal with tax-exempt yields of up to 8.05% to finance a Willows, Calif., plant aimed at transforming rice-farming waste into fiberboard, a wood substitute used in furniture. Mr. Wiley’s Franklin California High Yield Municipal Fund was one of the original investors.

The project sold another $74 million in muni bonds last year. The opening was delayed, however, by the pandemic and the borrower, CalPlant I LLC, defaulted on an interest payment in July. Bondholders agreed to hold off on collecting debt payments for two years.

Nevertheless, in October CalPlant was able to borrow another $42 million from investors including the Franklin California High Yield Municipal Fund, where CalPlant bonds now account for about 1% of assets, said Mr. Wiley. He said he believes in the project.

A CalPlant spokeswoman said operations will begin this month.

Some of the original 2017 bonds traded at 78.5 cents on the dollar in October, up from 54 cents in June, according to Municipal Securities Rulemaking Board data.

David Hammer, Pimco’s head of municipal-bond portfolio management, said some high-yield muni debt is cheaper than similarly risky corporate debt, but one danger for the broader high-yield market is that repayment troubles on a handful of projects could drag down a closely watched high-yield fund and spook investors.

“I do think we are approaching a day of reckoning for some of these individual riskier deals,” he said. 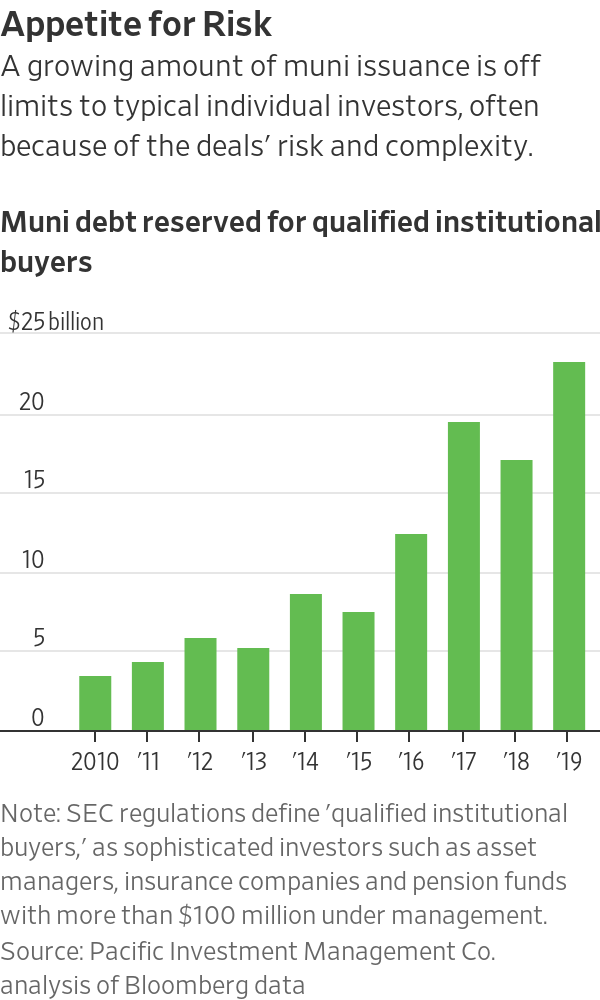 John Miller, head of municipals at Chicago-based Nuveen LLC, one of largest high-yield muni managers, said investors who have stuck with speculative muni debt this far likely have the stomach to hang on through future shocks.

Nuveen is the main investor in a plant near Starbuck, Wash., built to convert wheat and alfalfa straw into paper pulp. The project shut down in the early days of the pandemic and is drawing on reserves to cover operating expenses and make payments on its nearly $200 million in munis issued at yields of up to 7.75%.

Nuveen said in a statement that the paper pulp project faced technical challenges made more difficult by the pandemic and that the firm has confidence in the operation.

Are high-yield muni bonds worth the risk? Why or why not? Join the conversation below.

Write to Heather Gillers at heather.gillers@wsj.com