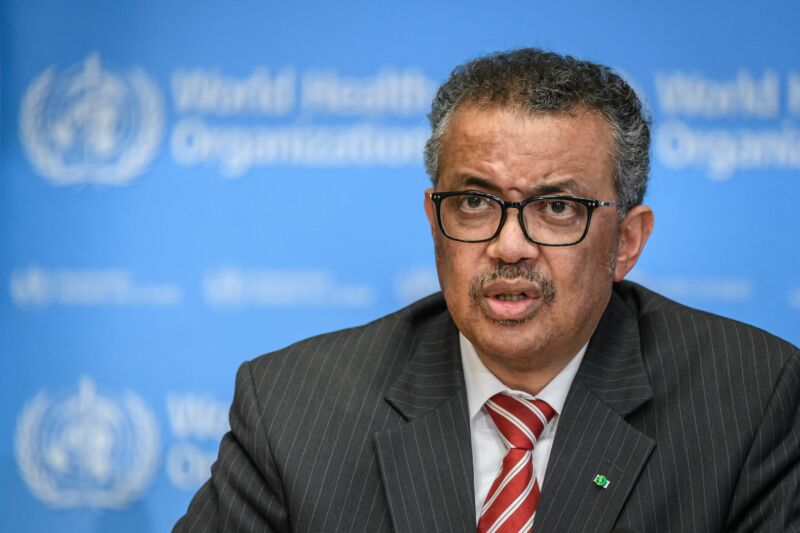 Enlarge / Geneva: WHO Director-General Tedros Adhanom Ghebreyesus announced on March 11, 2020, that the new coronavirus outbreak can now be characterized as a pandemic.
Getty | FABRICE COFFRINI

There’s more good news on the COVID-19 vaccine front today: biotechnology company Moderna reported in a press release this morning that its mRNA vaccine appeared 94.5 percent effective at preventing COVID-19 in an interim analysis of a large, Phase III trial. The news comes exactly one week after similar results came out via press release for another mRNA vaccine developed by pharmaceutical giant Pfizer and German biotech firm BioNTech.

But, while health experts are “cautiously optimistic” for this and many other vaccines in the coming months, they warn that such a timeline will not be fast enough to spare lives and health care systems from the current spike in disease.

“Right now, we are extremely concerned by the surge in cases we’re seeing in some countries,” Tedros Adhanom Ghebreyesus, Director-General of the World Health Organization, said in a press conference Monday. “Particularly in Europe and the Americas, health workers and health systems are being pushed to the breaking point.”

Dr. Tedros and other WHO officials stressed that—while having an effective vaccine is critical to defeating the novel coronavirus—SARS-CoV-2—it is not the end of the fight. Deploying the vaccine will be the next, difficult challenge, one that will require significant infrastructure and resources from health care systems—some of which are currently overwhelmed in many places.

Getting an effective vaccine is “like building base camp at [Mount] Everest,” Kate O’Brien, director of WHO’s Immunization, Vaccines and Biologicals Department, said Monday. “But the climb to the peak is really about delivering the vaccines. And this cannot be overemphasized.”

Still, news of Moderna’s trial raised eyebrows and optimism. “The data are striking… they’re really quite impressive,” top infectious disease expert Anthony Fauci said in a TODAY interview early Monday. “Help is on the way—it certainly is,” he added. “But the fact that help is on the way should spur us even more to double down on some of the public health measures, to be able to use the combination of a vaccine and public health measures to turn this thing around. We can do it.”

Moderna’s results come from an interim analysis of its Phase III trial, which was triggered when the trial recorded 95 cases of symptomatic COVID-19 among its 30,000 participants. An independent monitoring board reported that 90 of those cases occurred in participants who received a placebo, while the remaining five cases occurred in the group given Moderna’s vaccine, mRNA-1273. That yields an estimate of 94.5 percent efficacy, though that percentage may very well change as the trial reaches a final 151 cases and a median follow-up time of two months for all participants.

Within the 95 cases, 11 were deemed severe. All 11 cases were in the placebo group.

Moderna also noted in its press release that the 95 cases included 15 people over age 65 and 20 people who identified from racial and ethnic minorities.

Side effects were mostly mild to moderate, but some patients reported “Grade 3” events. According to the Food and Drug Administration, such events are significant and prevent daily activities but do not require hospitalization. The Grade 3 events included “injection site pain (2.7 percent) and, after the second dose, included fatigue (9.7 percent), myalgia (8.9 percent), arthralgia [joint pain] (5.2 percent), headache (4.5 percent), pain (4.1 percent) and erythema/redness at the injection site (2.0 percent). Moderna noted that these effects were “generally short-lived.”

The press release earned praise from experts for the amount of information it provided. “It’s a fairly detailed press release,” WHO Chief Scientist Dr. Soumya Swaminathan said Monday. In contrast, the press release from Pfizer and BioNTech last week did not include information on disease severity or participant’s age and diversity.

Moderna also offered another one-up over Pfizer and BioNTech in a separate press release, touting its vaccine’s storage conditions. Unlike the Pfizer/BioNTech mRNA vaccine, which requires storage at -70° Celsius, new data suggests that Moderna’s vaccine remains stable at 2° to 8° C (36° to 46°F)—the temperature of a standard home or medical refrigerator—for 30 days.

“We are pleased to submit these extended stability conditions for mRNA-1273 to regulators for approval,” Juan Andres, Chief Technical Operations and Quality Officer at Moderna said in the press release. “The ability to store our vaccine for up to 6 months at -20° C including up to 30 days at normal refrigerator conditions after thawing is an important development and would enable simpler distribution and more flexibility to facilitate wider-scale vaccination in the United States and other parts of the world.”

Such conditions will make vaccines considerably easier to ship and deploy in a variety of settings, experts at the WHO acknowledged.

With the good news Monday, lame-duck US President Donald Trump was quick to take credit for the vaccine’s success so far. In a tweet, Trump said, in part: “For those great ‘historians,’ please remember that these great discoveries…. all took place on my watch!”

Moderna’s vaccine was developed in collaboration with the National Institute of Allergy and Infectious Diseases (NIAID) and received nearly $1 billion in funding from the Biomedical Advanced Research and Development Authority (BARDA), part of the US Department of Health and Human Services.

This is in contrast to the Pfizer/BioNTech vaccine, which was not developed with federal funding.

In addition, Moderna also agreed to a deal worth up to $1.525 billion to provide the United States with 100 million doses of vaccine via Operation Warp Speed.

Moderna said it will apply for an Emergency Use Authorization (EUA) with the Food and Drug Administration “in the coming weeks.” The company currently plans to have approximately 20 million doses of mRNA-1273 ready to ship in the US in 2020 and have ready an additional 500 million to 1 billion doses globally in 2021.

But, while all of this did occur on Trump’s “watch,” the country is also in a nightmarish surge in coronavirus cases and disease. The current seven-day average in daily cases has risen to more than 145,000, with a dizzying spike of over 170,000 last Friday. Hospitalizations are also at a record high, with nearly 70,000 people currently in the hospital with COVID-19. Deaths, which typically lag cases and hospitalization by weeks, are also beginning to spike.

“There is no excuse for inaction,” Dr. Tedros said Monday in response to the surges. “My message is very clear: act fast, act now, act decisively. A laissez-faire attitude to the virus—not using the full range of tools available—leads to death, suffering and hurts livelihoods and economies.”