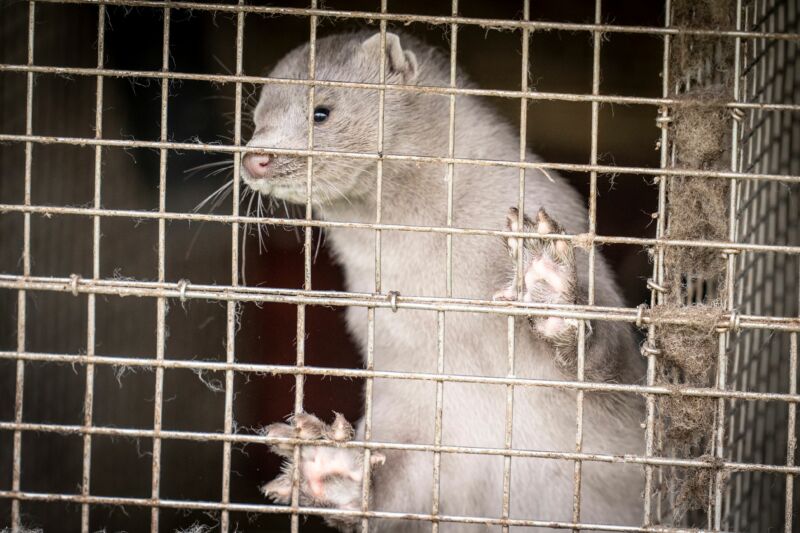 Enlarge / A mink is photographed in a farm in Hjoerring, in North Jutland, Denmark, on October 8, 2020.
Getty | MADS CLAUS RASMUSSEN

A genetic variant of the pandemic coronavirus, SARS-CoV-2, found in mink has spread from the animals to at least 12 people in Denmark, the prime minister said at a press conference Wednesday. The government is now planning to cull all the mink on Danish farms, which are estimated to have between 15 and 17 million of the animals.

“It is very, very serious,” Prime Minister Mette Frederiksen said, according to the Associated Press.

It’s so far unclear how the genetic variation found in infected mink could actually affect humans. Researchers who track genetic variations in SARS-CoV-2 have not yet seen data on the mink strain and cautioned people not to be overly concerned.

Genetic variations naturally occur and accumulate in coronaviruses over time, which is how scientists often track their spread in humans. Since the pandemic began, SARS-CoV-2 does not appear to be mutating particularly quickly, and scientists have found no firm evidence that any particular genetic variant or strain of virus is more dangerous to humans than any others.

Still, Frederiksen said health authorities are worried about the possibility that the mink variant could evade protective immune responses in humans and are planning the cull as a precaution. Specifically, they’re concerned anti-SARS-CoV-2 antibodies people make—either during an infection from a SARS-CoV-2 strain known to be circulating in humans or from a future vaccine based off a strain from humans—may not be able to fight off the mink variant as well.

“The mutated virus in mink may pose a risk to the effectiveness of a future vaccine,” she said, according to Reuters.

So far, authorities have identified five animals on mink farms with the genetic variant and 12 people in the northern part of the country with the variant.

Mink have long been known to be susceptible to catching the pandemic coronavirus from humans. Outbreaks on mink farms have been reported for months in many countries, including the Netherlands, Spain, and the United States, as well as Denmark. There have also been earlier reports of mink passing the virus back to humans.

Denmark, which is one of the world’s top mink fur exporters, has been trying to cull infected herds since June. Still, Denmark’s minister for food, Mogens Jensen, said that 207 Danish farms were now infected, up from 41 last month, according to the AP. Health Minister Magnus Heunicke added that half of the 783 human COVID-19 cases identified in northern Denmark are “related” to mink.