Natural-gas prices are heading for their biggest monthly drop in two years, stung by warmer-than-expected weather forecasts that are denting demand for the heating fuel.

Even though it rebounded on Tuesday, the front-month natural-gas futures contract has fallen 17% this month. That would mark its second straight monthly decline bigger than 14% and largest monthly drop since December 2018. Prices are more than 30% below a peak hit in late October and have suffered four daily drops of at least 6% this month, a period of outsize volatility punctuated by Monday’s 8.5% slide.

Natural-gas prices often gyrate in the winter because demand in the season is driven by how frequently people use their heaters. The power-generation fuel is used as the primary source of heat for roughly half of the homes in the U.S., so speculative investors often position for demand and prices to rally in the colder months of the year. 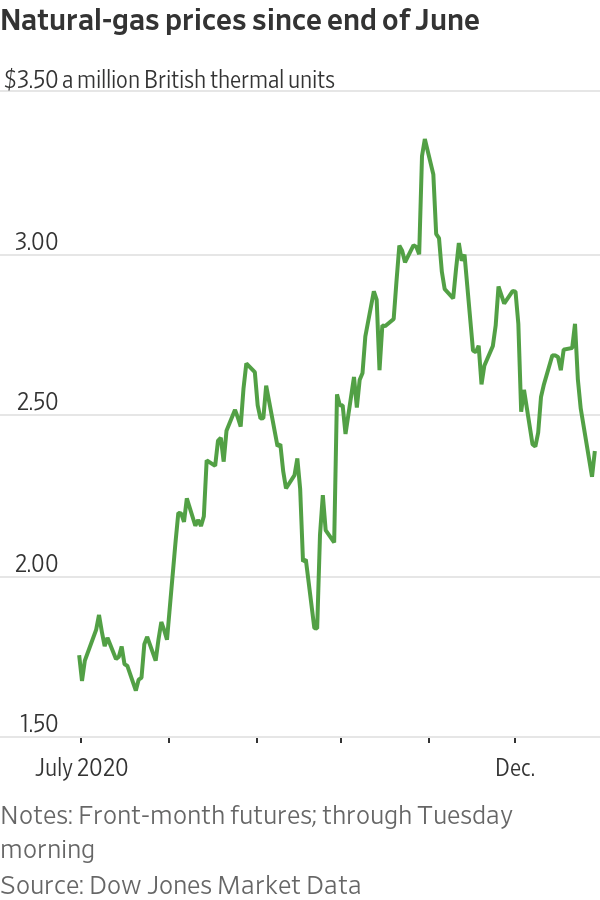 Recent weather forecasts show warmer temperatures spreading across the U.S. in the next few weeks, though, driving an unwind of bullish bets and fresh price declines.

“It is becoming increasingly apparent that the market will need to gradually discount another warmer-than-normal winter,”

Traders were looking ahead to weekly government inventory figures scheduled to be released on Thursday. The most recent Energy Information Administration data for the week ended Dec. 18 showed U.S. stockpiles of natural gas were 8.4% above their levels from a year earlier and 6.5% above their five-year average levels for this time of year, another indication that natural gas remains plentiful.

Analysts expect volatility to persist given shifts in weather forecasts and thinner trading volumes recently around the Christmas and New Year’s Day holidays.

On Tuesday, the front-month futures for January delivery advanced 3.5% to $2.385 a million British thermal units on their final day of activity before expiration. More heavily traded futures for February delivery rose 4.1% to $2.421.

Elsewhere in commodities Tuesday, U.S. crude-oil futures added 1.2% to $48.20 a barrel, staying in a recent trading range near 10-month highs as drivers return to the roads following early-year economic shutdowns. Prices started the year above $60, briefly tumbled below $0 for the first time ever in April, then have rebounded steadily with demand rising and producers curtailing supply.

Recent gains in stocks and other riskier assets also have helped support oil, with traders expecting fiscal and monetary stimulus to boost the global economy in 2021.

Fracking regularly comes under scrutiny, but it’s an integral part to the cyclical nature of energy markets. Heard on the Street’s Jinjoo Lee explains how it all works. Photo: David McNew/Getty Images[object Object]

Snacklins: A Fun Lesson In Rebranding During Good Times (Just

California cops pull over driver with AR-15, ‘It’ clown mask