As automakers struggle to differentiate themselves in an increasingly crowded market with fewer distinctions among brands, one of the trends that has grown is adopting the branding of high end audio systems. Ford and Lincoln use B&O Play and Revel, Hyundai and Kia use Infinity, Volvo, Maserati and Jaguar all use Bowers and Wilkins and the list goes on. One audio brand that has been largely absent from the automotive market is McIntosh, but that changes with the debut of the next-generation Jeep Grand Cherokee.

The first hint of a new relationship between Jeep and McIntosh Laboratory came last fall with the reveal of the new Grand Wagoneer concept. A virtual version of the brand’s signature blue back-lit analog meters appeared on the 12.1-inch central touchscreen of the full-size SUV concept. That collaboration led to the development of a production dubbed MX950 that launches on the midsize Grand Cherokee L in the second quarter of 2021.

McIntosh has dabbled in car audio previously with some aftermarket equipment in the 1990s and systems for Harley-Davidson HOG in 2002 as well as the 100th anniversary Ford GT in 2003. However, this Jeep partnership will be the first high-volume project for mainstream vehicles.

The MX950 McIntosh Entertainment System for the Grand Cherokee will have 19 speakers spread among 12 locations in the cabin. A 17-channel amplifier will drive the speakers with 950W. None of these specs are the biggest numbers in the industry, but quality is more important than quantity in audio. If McIntosh lives up to the reputation it has developed for home audio over its 70-year history, upcoming Jeeps should have some of the best sound on the road. 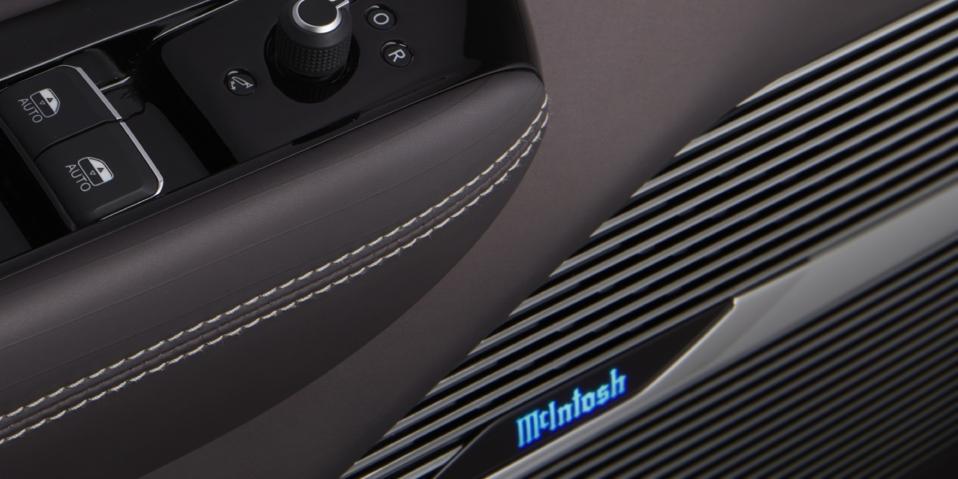 There’s no word yet on whether the virtual analog meters will show up in the production Uconnect 5 display. However, reminders of McIntosh will dot the interior. The same metal ridged volume and tuning knobs that appeared on the concept and replicate the design language of other McIntosh products will be present in the Jeep. The door speaker grilles also have backlit McIntosh logos in the same shade of blue as the meters on the company’s amplifiers. One element you won’t find in the new Jeeps however, is vacuum tubes. They would be a bit too fragile for the road.

The McIntosh MX950 system will be available on the Grand Cherokee Overland and Summit trims and standard on the Summit Reserve.