An
Apple
car, if it is ever launched, would be a big deal. But the potential rewards for manufacturers come with a sting.

Hyundai shares rose 9% Monday after a Korean newspaper reported that the car maker plans to sign an agreement with Apple for an autonomous electric vehicle. The stock had already jumped 19% on Friday, when Hyundai said it was in early-stage discussions with the iPhone designer.

Apple started to work on a vehicle in 2014, but the project has progressed fitfully and the company has rarely acknowledged it publicly. A Reuters report last month said it was targeting a 2024 launch, which would be very ambitious for anything with a meaningful degree of autonomy. Hyundai would likely be a production partner, akin to the role Taiwanese electronics giant Foxconn plays in iPhone assembly. 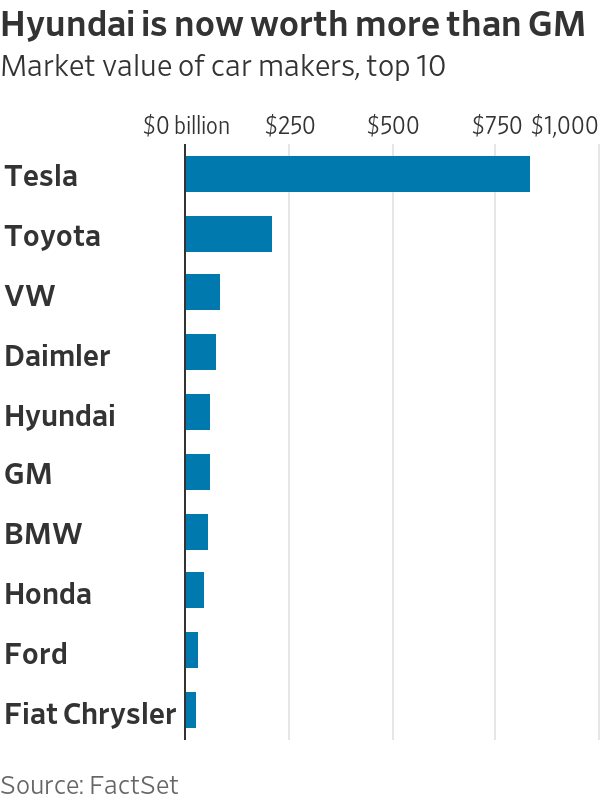 For all the glamour—and potential manufacturing volumes—of being associated with an Apple-branded car, the almost $15 billion gain in Hyundai’s market value since Thursday’s close is hard to justify. Besides the risks that the talks come to nothing, or that any project drains cash for longer than expected, contract manufacturing isn’t an especially attractive business.

Canadian supplier
Magna International,
which is also seen as a potential partner for Apple, assembles vehicles under other brands, notably the Jaguar I-Pace, an all-electric sport-utility vehicle. The activity hasn’t been very profitable. Magna’s “complete vehicles” division reported operating margins of 2.1% and 1.1% in 2019 and 2018, respectively, lower than at its parts businesses.

So why are some established car makers now offering to make EVs for potential rivals? Beyond Hyundai’s talks with Apple,
General Motors
agreed to make a pickup truck for U.S. startup
Nikola
last year, before that part of the deal unraveled amid revelations that Nikola founder

In GM’s case, the arrangement was a way to spread the cost of its EV technology over a broader base of vehicles, whether or not they bear a GM brand, and to pave a new growth path. Hyundai, which unveiled its own EV platform last month, may be making a similar calculation in its talks with Apple, which could be much more consequential. Both car makers have come to be seen as forward-thinking and their stocks have risen close to previous records.

The first word on what Wall Street is talking about.

The risk is that such deals facilitate the rise of new EV brands, while giving established car companies an even less satisfactory return than Magna currently makes from vehicle assembly. Foxconn, whose iPhone margins are infamously thin, in October launched an automotive platform that it wants to be the “Android of EVs.” It is unclear how far the company will get involved with the difficult business of vehicle assembly, but the move underlines the risk of new, return-sapping competition from the electronics and battery manufacturing hubs of East Asia.

Much activity in the car industry is currently motivated by the $834 billion market value of Tesla. If this number can be rationalized, which is challenging, it is only with reference to the value of Tesla’s brand and product development—the elements no EV startup wants to outsource. For car makers, seeking assembly contracts is a growth strategy that may run into a dead end, even with a brand as powerful as Apple.

Write to Stephen Wilmot at stephen.wilmot@wsj.com