Anne Hathaway and Chiwetel Ejiofor in ‘Locked Down’

With all the talk about Warner Bros. allowing their 2021 theatrical slate to debut concurrently on HBO Max (for the first 30 days of domestic release), the Warner Media streamer hasn’t been light on streaming-only originals. They bought Seth Rogen’s (pretty damn good) American Pickle from Sony and sent Robert Zemeckis’ (not-so-good) redo of The Witches to streaming as a late-Halloween “treat.” I heartily recommend Steven Soderbergh’s Let Them All Talk (featuring fine and subtle work from Meryl Streep, Candice Bergan and Dianne Wiest), the documentary Class Action Park and Unpregnant (the lighter, more crowd-pleasing but no less artistically valid version of Never Rarely Sometimes Always). Their newest streaming original is writer Steven Knight and director Doug Liman’s Locked Up, an Anne Hathaway/Chiwetel Ejiofor dramedy concerning an estranged couple stuck together during quarantine.

It’s just the latest movie to take place either directly during our current self-isolation era or somewhat tangentially related to it. It follows the Shudder original Host, an ambitious “Zoom” thriller that concerned a haunted seance which brought buzz, acclaim and a Blumhouse deal for director Rob Savage. It also follows the Platinum Dunes-produced Songbird, which was a minimalist thriller set in a Covid-wracked future where most of the country is forced to quarantine in a tyrannical lockdown. It’s… not good, but the Adam Mason-directed thriller (which follows the Cloverfield formula of a young hunk having to rescue his favorite gal during an extinction-level event) is unapologetic exploitation fare (which is fine) and mostly succeeds in its “Can we make a real movie during lockdown?” mission.

That’s one thing that Locked Down, which eventually becomes a small-scale heist flick concerning a valuable diamond, shares in common with its pulpier precedents. All three films seem to be more about filmmakers seeing if they can make a movie (or how much of a “real” movie they can make) while dealing with the current status-quo. Using the current pandemic as a present-tense (or futuristic) setting lets them have their cake and eat it too in terms of social isolation, safety measures and topical narratives. Beyond the “just because we can doesn’t mean we should” commentary, do audiences actually want pop culture entertainments that remind them of the current hellscape? I talk a lot about studios revamping franchises because they want to and not because audience interest is there, and this isn’t that different.

I am reminded, in a half-hearted way, of the flood of prestige pictures which opened theatrically in the mid-2000’s that took place in and around the post-9/11 “War on Terror.” I’m not talking about the metaphorical blockbusters like War of the Worlds, Transformers, The Dark Knight, Avatar and The Avengers. I’m thinking about star-driven, adult-skewing dramas like Tommy Lee Jones’ In the Valley of Elah, Reese Witherspoon’s Rendition, Angelina Jolie’s A Mighty Heart and Natalie Portman’s Brothers which earned strong reviews and maybe even a little Oscar buzz but mostly played to empty theaters. The biggest-grossing of the bunch was Robert Redford’s intriguing Lions for Lambs (featuring one of Tom Cruise’s best against-type performances, in a supporting role as a conservative U.S. senator), which earned $64 million global on a $35 million budget. 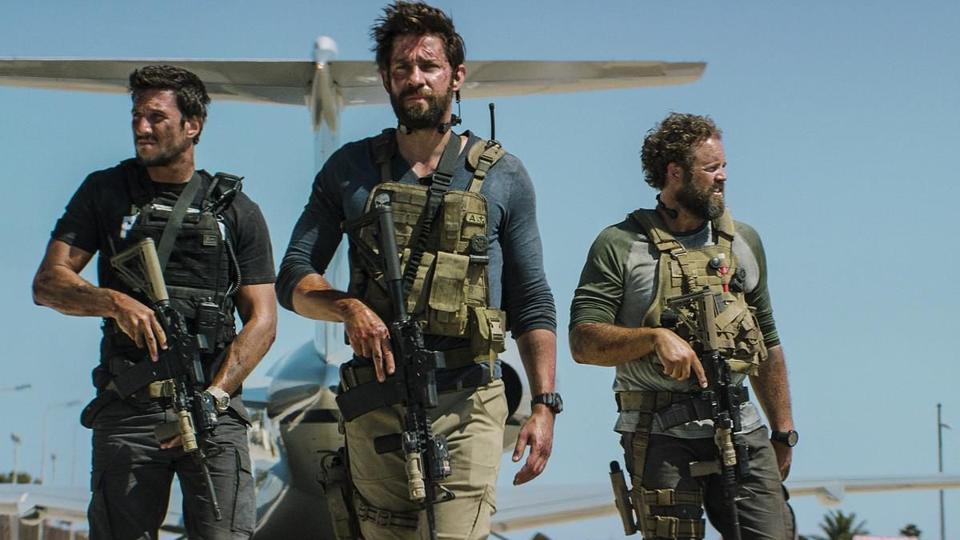 Conversely, audiences showed up, understandably, for more action-centric fare like Jarhead ($97 million but on a $70 million budget), The Kingdom ($87 million, but also on a $70 million budget), Acts of Valor ($82 million/$12 million budget), Zero Dark Thirty ($133 million/$40 million), Lone Survivor ($155 million/$35 million). Save for Clint Eastwood’s Bradley Cooper-starring American Sniper ($548 million/$60 million in 2014), none of these titles could hold a handle to the conventional fantastical escapism of the era. Not even Michael Bay’s 13 Hours and the Secret Soldiers of Benghazi ($64 million/$50 million in 2016) could break through America’s dedication to fantastical parable and escapist distractions. And yet these films were made partially because filmmakers and actors wanted to make them and wanted to be associated with movies that spoke to the current moment in time.

“This is a good movie about an important subject” is a valid reason to make a film, even if we know in our gut that nobody will see it and it won’t change hearts and minds. That goes double in our current streaming/PVOD era where whether (and how) the media covers a movie premiering on a platform is almost more important than whether anyone actually watches it. Moreover, the notion of watching a mostly enjoyable and engrossing “Hathaway and Ejiofor” acting stand-off (that, at worst, feels like a filmed play) is a much easier decision than driving to a theater and buying a ticket. It helps that the film actually has something to say about how the current normal is readjusting our moment-to-moment priorities and/or arguably out-of-date cultural and moral presumptions, but I digress.

Whether these films actually have an audience beyond “filmmakers want to see if they can do it,” they may exist as a time capsule for this present moment. I don’t expect to see a lot of movies taking place during this pandemic once the danger has passed. I can’t imagine many filmmakers wanting to willfully inhibit their artistic design via approximating Covid-related safety protocols and practices once they don’t have to. Audiences may be even less willing to consume filmed content (be it on TV or in theaters) that will remind them of this grim period once it has passed. Movies like Host, Locked Down and Songbird made during this time about this time may exist in a proverbial bubble, looking and feeling entirely different from the films that preceded them and followed them.

I could be wrong, as we could see a bunch of prestige awards-season pictures (and television mini-series) dissecting life during Covid from a micro or macro sense, but the inherent limitations and obstacles of such a project makes that far from a guarantee. And if such films exist, they are likely to be motivated more by presumptions of artistical and historical value versus commercial interest. As such, while wondering if and how future blockbusters will metaphorically deal with this global catastrophe (along with the last four years of the Donald Trump administration), I’ll argue that these Covid-specific flicks serve a purpose as time capsules. They could only be made, and their specific of-the-moment impact could only be felt right now. That two out of three of them are pretty good is a bonus.