Life-insurance stocks have been the beneficiaries of a huge relief rally this month, thanks to positive vaccine news and a jump in U.S. Treasury yields. But it is too soon to declare them fully healed.

Shares of life-and-health insurers in the S&P 500 are up 22% since the start of the month, about twice the gain of the broad-based index. An effective vaccine surely lowers the risk of major losses for life insurers, both from fewer potential Covid-19 deaths and by taking some worst-case-scenario equity and credit losses off the table in their investment portfolios. It likely will increase the pace of buybacks if insurers are willing to pare down their capital buffers a bit, too.

But investors shouldn’t necessarily draw a straight line from vaccines to better core results, at least in the near term.

A number of insurers have reported Covid-19 mortality exposures lower than initially forecast, attributing this to relatively lower mortality among the insured population. However, that may not be the complete mortality story. Notably,
Lincoln National
highlighted improving treatment of Covid and protection of the elderly, but also rising mortality trends beyond Covid cases. 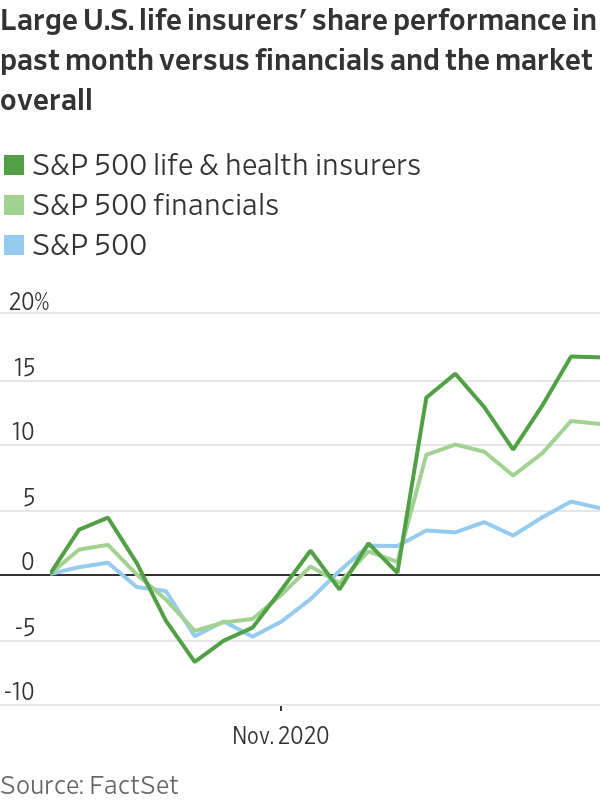 “You started to see the emergence of what we’re calling pandemic-related,” the company told analysts in early November, adding that “we see it across all causes of death. We see heart disease up 35% year-over-year. Cancer up roughly 12% year-over-year. Other respiratory, up 42%.”

Reinsurance Group of America
said in its November analyst call that U.S. Centers for Disease Control and Prevention data also show an uptick in excess deaths not tagged as Covid so far this year. The company suggested some of those might be unreported Covid deaths, but that there may also be “people who are delaying visiting their doctor or delaying going to hospitals.”

As it is hard to pin down what exactly is causing the uptick in non-Covid excess mortality, it is also difficult to predict a trend. If lockdowns, economic stress or joblessness are playing a role, could winter worsen those effects, even if a vaccine is in the process of being distributed?

Get a coronavirus briefing six days a week, and a weekly Health newsletter once the crisis abates: Sign up here.

Frequency-of-claim effects that have helped underwriting performance at property-and-casualty insurers, such as less driving meaning fewer accidents, have also have helped life-and-health insurers in products such as supplemental coverage or corporate benefits.
MetLife,
for example, has noted low utilization of dental benefits but said utilization rose toward the end of the third quarter. Analyst Erik Bass of Autonomous Research suggested in a note that long-term care claims could rise if people have put off going into a nursing home or other facility because of Covid-19 risks. So there could be a backlog that still drives high claim volumes post-vaccine.

It also may be premature to assume that interest-rate effects have bottomed out. Life insurers in the third quarter did take charges related to their long-term assumptions about future rates. Still, companies estimating rates 10 years from now project them to be anywhere from 2% to 3.25% by then, according to figures compiled by Autonomous. So although rates right now could arguably have a floor, there is still room for future forecasts to come down further, such as if the economy is slow to recover.

Life insurers are likely still a good way to trade faster progress for a vaccine and an economic rebound. But investors need to be aware of potential complications in the healing process, too.