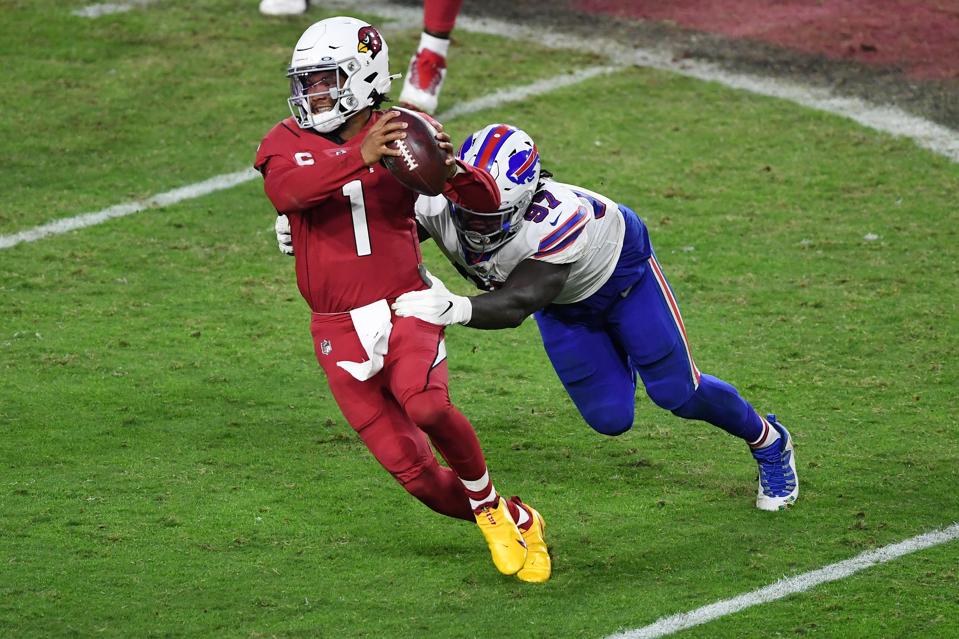 The Arizona Cardinals selected Kyler Murray in the NFL Draft because they weren’t willing to give Josh Rosen another chance. It is the blueprint every woebegone NFL team should follow. A quarterback’s draft status should not provide him with job security if there is a better option available.

It’s safe to say Murray is better than Rosen — by a lot.

The 2018 Heisman Trophy winner is in the midst of an MVP-caliber season, and inserted himself in the middle of the conversation Sunday with a herculean game-winning Hail Mary touchdown pass to DeAndre Hopkins. The throw catapulted Arizona ahead of the Buffalo Bills 32-30, and with the Seattle Seahawks falling, right into first place in the NFC West.

It was a sensational play that began with Murray scrambling to his left and evading a Buffalo linebacker. Then he heaved the ball 43 yards down the field, where Hopkins grabbed it between three Bills defenders.

It was the first game-winning Hail Mary since Aaron Rodgers hit tight end Richard Rogers to beat the Detroit Lions in 2015. Murray is in good company.

Murray has been a human highlight reel this season, and didn’t disappoint the (limited) hometown crowd Sunday. The best scrambler in the league added another 61 rushing yards and two rushing touchdowns to his total, including a 15-yard scamper in the third quarter that put the Cardinals ahead.

The Green Bay Packers Are Now The NFC’s No. 1 Seed

Murray is the definition of a dual threat.

Entering Sunday, Murray led all quarterbacks with 543 rushing yards, only trailing seven running backs. He now has 10 rushing touchdowns, which now places him second in the league, behind Dalvin Cook.

The Cardinals knew Kliff Kingsbury was infatuated with Murray when they hired him in early 2019. The innovative head coach said the previous October he would select Murray with the No. 1 overall pick in the NFL Draft, and that’s exactly what happened.

While Murray was the consensus No. 1 favorite, it was still a bold move. At 5-foot-10, Murray was the shortest QB drafted in any round since 2000, and there were questions about his hand size. But more importantly, the Cardinals took Rosen with the No. 10 overall pick the previous year. It is almost inconceivable for an NFL team to give up on a first-round quarterback after just one season, even if they change head coaches.

After drafting Murray, the Cardinals became the first team to select quarterbacks in the first-round in back-to-back years since the 1983 Baltimore Colts, who drafted John Elway at No. 1. They found up trading him to the Denver Broncos, but their talent evaluation was spot-on — much like Kingsbury’s.

When Kingsbury was hired, he gave lip service to the idea of developing Rosen. But the former UCLA standout was coming off a putrid campaign, in which he completed just 55% of his passes and had a putrid 11:14 touchdown-to-interception ratio. The Cardinals clinched the league’s worst record.

As the 2019 NFL Draft approached, the idea of Kingsbury jettisoning Rosen in favor of Murray began to gain traction, and then became expected. It made perfect football sense. Kingsbury ran the same Air Raid offensive system that Murray excelled in at Oklahoma, where he rose from Baker Mayfield’s backup to Heisman winner.

Plus, Murray is a superior talent to Rosen. Arizona traded Rosen to the Miami Dolphins for a 2019 second-round pick and 2020 fifth-round selection. He only started three games for the five-win Dolphins, who took Tua Tagovailoa with the No. 5 overall pick. Miami waived Rosen this fall, and he signed with the Tampa Bay Buccaneers practice squad.

There are multiple teams this season rumored to be talking about moving on from their heralded, albeit struggling young pass-throwers. There is pressure building on Giants QB Daniel Jones, who played his first ever career game last week without a turnover. The 3-7 Giants defeated the Philadelphia Eagles Sunday to get back into the NFC East race, where it looks like a losing team could win the division.

New York’s record is a bit deceiving, however. Jones has been the primary culprit for their five one-possession losses, including a disappointing Monday night effort against the Bucs, in which he threw two picks. Even though he was selected No. 6 overall in 2019, he’s playing for his job, and rightfully so.

The same can be said for New York Jets QB Sam Darnold, who’s missed three games with a shoulder injury. The Gang Green are winless and have scored just 10 offensive touchdowns in nine games. Darnold was taken No. 3 overall in 2018, but everyone is rightfully expecting the Jets to draft Trevor Lawrence at No. 1 next year, assuming their ineptitude continues.

It was even suspected the Dolphins were trying out Tagovailoa (they own the two-win Texans’ first-round pick), though head coach Brian Flores refuted those rumors.

Murray showed flashes of excellence in his rookie season and has shined in his sophomore campaign. While his overall passing numbers remain relatively pedestrian — he completed 22-of-32 throws for 245 yards, a touchdown and an interception Sunday — there’s no denying his explosive skillset. Murray-Hopkins is the most dangerous combination in the league. It pays to be bold.

The last two MVPs, Patrick Mahomes and Lamar Jackson, both captured the award in their second seasons. These days, success often comes immediately for prized young quarterbacks. And when it doesn’t, teams should rightfully look to move on.

Though admittedly, it’s a lot easier when someone like Murray is on the board.