“I had an understanding of who Malcolm X was and what those stereotypical optics were, the lacerating demagogue and the rabble-rouser. That version of him was strong in my mind,” admitted Kingsley Ben-Adir, who portrays the iconic activist in One Night in Miami.

“However, I think it was in the reading of Kemp Power’s screenplay that it was pretty clear, especially by the time I got to the end, this piece was asking for a different kind of heartbeat. It’s the vulnerability of these men at the center of this story. Without the love and the joy and the friendship, it wouldn’t work, just from an actor’s perspective. It was about trying to figure out what the function of Malcolm was in this context. It’s all good playing Malcolm X, but what is Malcolm in the story that you’re going to play him in?”

He added, “The Malcolm in this story was obviously a man who’s going through a very, very tricky moment on a very specific night. I dug into the world and found out more of the specifics, and when I did, I realized it was an incredible opportunity to like, really investigate how crazy a time that was for him and how much was going on.”

Did the British actor think twice about taking on the role of such a controversial figure in Regina King’s feature directorial debut?

“When I was first meeting Regina after she saw my audition tapes, my conversation with her was the idea of showing Malcolm in this different way and how important the vulnerability was. I was subconsciously trying to persuade her that I was confident enough, I was fearless enough, and that I was excited about the opportunity,” Ben-Adir recalled. “I could sense that because they had lost their Malcolm and they had to find a new one very quickly, I didn’t want to add any stress to that process for Regina. I was trying to present her with the idea that I was up for the challenge. Looking back, I don’t know how true that was or if deep down, I was just sh***ing myself.”

“By the time Regina had cast me, it was a few days before Christmas 2019, and I was like, ‘I’ve got 12 days to prepare Malcolm X. I don’t know if this is career suicide,’ or I was just like, ‘What the f**k am I going to do?’ I was in New York, and I went for a walk. I took the call from my agents, and I said, ‘I’m going to call you back.’ I was strolling down to the East Village and thinking, ‘I have to do it. I have no choice. The opportunity is incredible, and these kinds of jobs don’t come along very often. I have to do whatever it takes to make it work.’ But, yeah, there was a moment when I was walking down to the street and giving myself this pep talk. I am so glad I listened to myself telling me that I had got to do this, and I am so happy Regina believed in me to do it.” 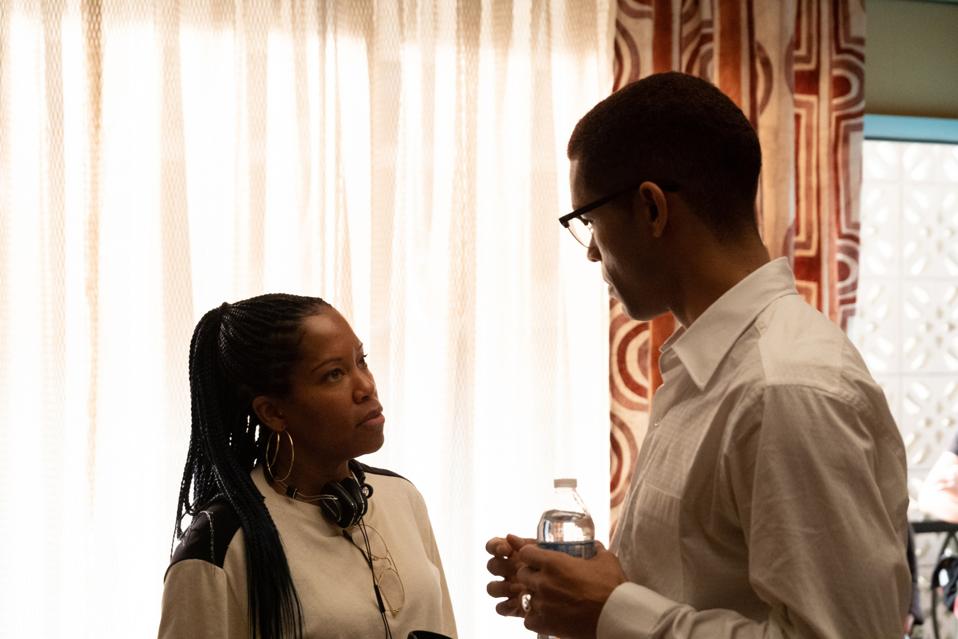 Director Regina King and Kingsley Ben-Adir on the set of the critically acclaimed drama, ‘One Night … [+] in Miami.’

Made for $16.9 million, One Night in Miami became the first film by a Black female director to be selected for the Venice Film Festival, where it premiered in September 2020. Boasting an ensemble cast that includes Eli Goree, Aldis Hodge, and Leslie Odom Jr., it lands on Prime Video on Friday, January 15, 2021.

Ben-Adir was in no doubt that it was King’s clear creative vision that was the key driver behind the film’s success.

“Regina had so many cool ideas, and so many takes on different scenes. I remember that one of the first things we shot was the prayer scene. I don’t think we were going to do anything specific, but then Regina gave me some Arabic to learn the night before,” the actor reflected. “She said she wanted me to learn it because Regina was going to shoot it a certain way and then cut to something else, so she had a very clear vision and solid ideas about essential details and particular moments.”

“Having that was creatively so freeing. We were constantly in the process of offering up ideas to each other, and Regina made the central focus for everyone, for the crew, for her, for us, about performance and acting and the emotional details that were so important. We were always checking in, and it was such a playful discovery together but led by someone who understands the process in such a profound and multifaceted way.”

Ben-Adir’s performance as Malcolm X has already put him front and center for awards season. Having already been handed the Gotham Independent Film Award for Breakthrough Actor, he’s also being campaigned as a potential Best Actor nominee for this year’s Oscars. Did the actor imagine that his journey with One Night in Miami would lead him there?

“I didn’t give myself time to think about that, certainly not at the time,” he confessed. “Sets can sometimes be distracting places. What I’ve learned in the last ten years, and I’ve made so many mistakes on TV, is that for my process, when I’m working, I have to stay in a deep concentration about the work. That was especially important with One Night in Miami because of what it is. Working with Regina King, it’s not just about her talent. She’s also a national treasure here in the States and an Oscar winner, and she has huge status. Just being attached to her, or next to her, you know there are going to be eyes on it, and you have to do it justice.”

Things have already started to change for Ben-Adir.

“We’ve been really busy with doing press, but I’m meeting with people a lot more, and people are sending things and offers of work without having to meet. I’m finding that kind of trippy, it’s kind of surreal, but I’m so grateful and appreciative,” he mused. “Regina has massively changed things, and that’s just a real encouragement to keep working hard. When Regina was happy, when she says, ‘We’re moving on,’ it was an incredible feeling. It was the kind and caring words of Regina as we were shooting that were really the things that built my confidence. “

One Night in Miami is available on Prime Video from Friday, January 15, 2021.