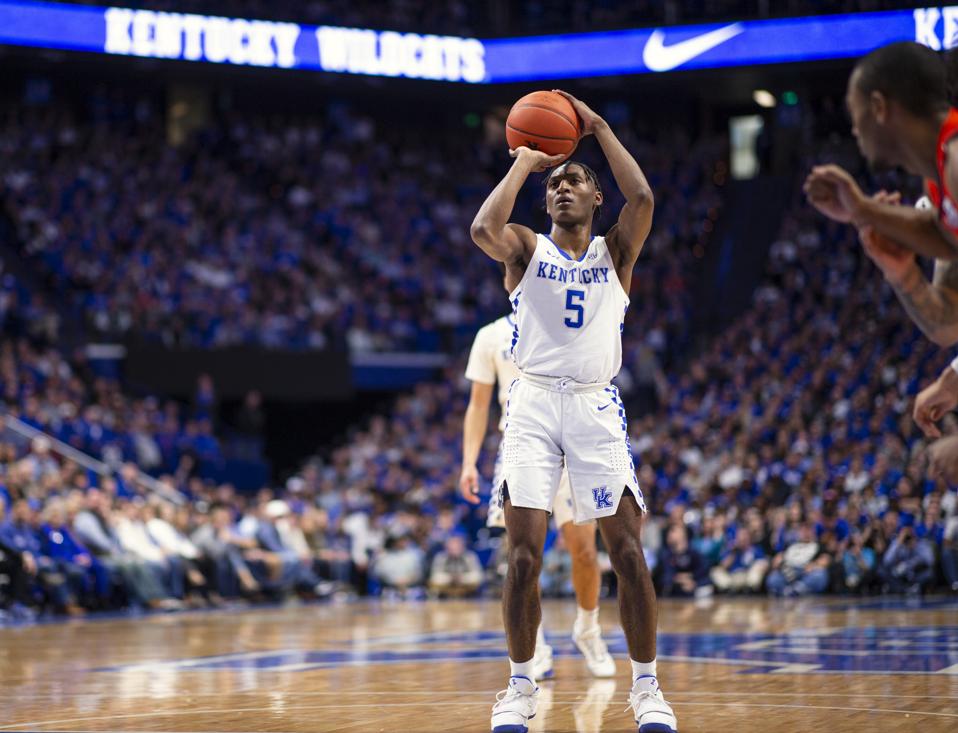 LEXINGTON, KY – FEBRUARY 29: Immanuel Quickley #5 of the Kentucky Wildcats shoots a free throw … [+] during the game against the Auburn Tigers at Rupp Arena on February 29, 2020 in Lexington, Kentucky. (Photo by Michael Hickey/Getty Images)

Former Kentucky guard Immanuel Quickley has met twice with three NBA teams and could surprise some people in next month’s virtual NBA Draft.

The 6-foot-4, 190-pound Quickley has met twice virtually with the Knicks, Pistons and Thunder, according to his longtime trainer Jide Sodipo. The Knicks pick at 8, 27 and 38, the Pistons at 7 and the Thunder at 25 and 53.

Quickley has also met with a slew of teams once — the Nets, Celtics, Heat, Lakers, Clippers, Hawks, Jazz, Bucks, Magic, Sun and Pelicans. Multiple mock drafts have the Maryland native projected as a late second-round pick.

The Ringer, for example, has him at 46 with the explanation, “Elite shooter with a high basketball IQ, but lacks ideal passing skills for a guard his size. “

But Sodipo says people forget Quickley was a five-star point guard in the high school Class of 2018 who played off the ball last season at Kentucky. And he still won Southeastern Conference Player of the Year when he averaged 16.1 points , 4.2 rebounds and 1.0 assists and ended the season on a 20-game double-figure scoring streak.

“Most of the [mock draft] guys only saw him last year,” Sodipo said. “They forget he was a pass-first point guard all his life. He just had to adjust to playing off the ball at Kentucky and he made the best of it. And now he’s a better all-around player than can play on it and off it.”

Sodipo added: “This young man is built for the modern-day NBA. Excellent defender, top-notch shooter, high basketball IQ, great teammate that can play on or off the ball and [he’s] a better person. He will out-perform many players who will be drafted ahead of him.”

“Jamal Murray did not play but about 15 percent point guard (at Kentucky),” Calipari said earlier this year. “I would say Immanuel played 5-8 percent point guard because the other two guys in front of him were better in pick-and-rolls and creating shots for their teammates. They weren’t a shot-creator like he was. So, the team used that strength and exploited that in him.”

“Immanuel was an absolute pleasure to coach over the last two years,” Calipari said. “I had as much fun coaching him and watching him grow than just about any player I’ve ever coached. Like some of our other guys that have gone on and done special things, like Shai Gilgeous-Alexander and Tyler Herro, he absolutely works his tail off. He takes his conditioning seriously, has unbelievable discipline, unwavering faith, confidence and spent just about all of his extra time in that gym.

“His reward: SEC Player of the Year, as voted on by the coaches. I’ve been in this league for 11 years and only had that happen three other times. Think about that with some of the kids we’ve had go through here.

“There’s no question in my mind that his growth in the NBA will be on the same path that it was here, which is steep. He is a wonderful, centered young man who has fought his way to the point of being a first-round draft pick. I’m looking forward to seeing what he does on that next level.”