Borussia Dortmund’s Julian Brandt has been heavily linked with a move to Arsenal. (Photo by Mario … [+] Hommes/DeFodi Images via Getty Images)

Julian Brandt has been strongly linked with a transfer to Arsenal all winter. The $38.5 million rated Borussia Dortmund midfielder has been unhappy with his game time at the Black and Yellows. The 24-year-old, who can play both on the wing and central midfield, has featured in just 955 minutes across all competitions this season. Germany’s Bild, therefore, speculated that Brandt could be allowed to leave the club for $27.5 million this winter.

Those rumors, however, have been shot down by BVB sporting director Michael Zorc. “There is nothing on the table at the moment,” Zorc said to German media last week. “It isn’t our fault that there are permanent rumors that have nothing to do with the truth. They are toying with names that have no considerations in our plans when it comes to selling players.”

Public denials when it comes to transfer rumors are not uncommon. Brandt has certainly been unhappy about his playing time at the Black and Yellows. Brandt’s arrival in the summer of 2019 was a major coup for Borussia Dortmund. But Lucien Favre never got the best out of the attacking midfielder, who played some of his best games under Leverkusen head coach Peter Bosz as an advanced number 8. 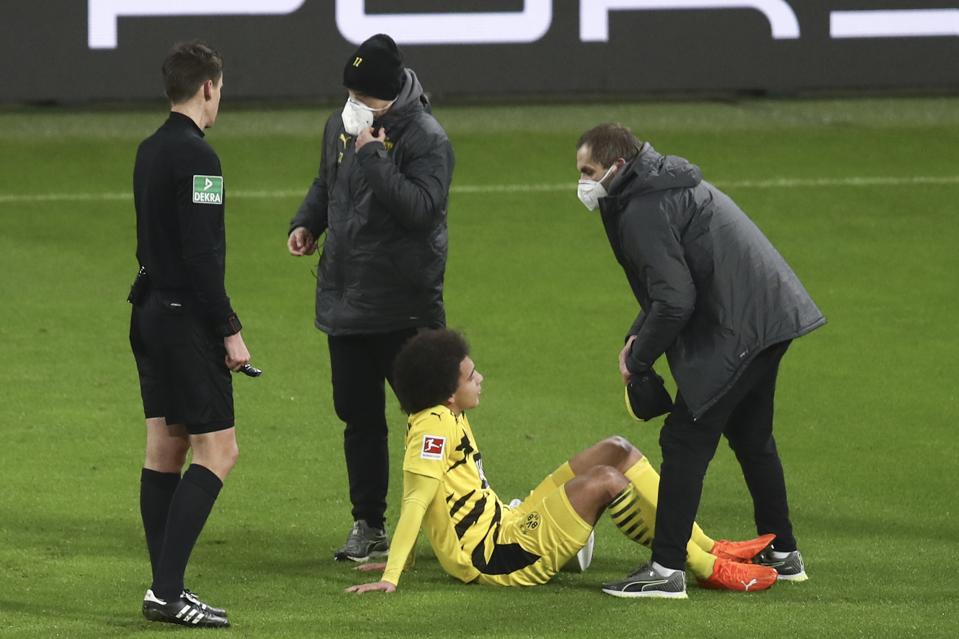 Axel Witsel’s Achilles injury will put an end to speculations about any BVB midfielder, including … [+] Julian Brandt, potentially leaving the club this winter. (Photo by Maja Hitij/Getty Images)

Favre never truly opted to play Brandt in that role, however. Instead, the Swiss coach played Brandt all over the pitch. The 24-year-old featured on the wing, as a playmaker and, most adventurous, as a false-number 9. Either way, Brandt could not hammer out a role at Dortmund. The recent transfer rumors are, therefore, simply a consequence of the player’s unhappiness in Dortmund.

That, in turn, would be good news for the likes of Arsenal, who, despite some financial problems and a transfer minus of $370 million—the club took out a $162 million loan with the Bank of England—have a real interest in the German national team player. That interest, however, received a significant, perhaps final, blow on Saturday.

Following the 3-1 win over RB Leipzig in Saturday’s Topspiel against RB Leipzig, Borussia Dortmund announced that midfielder Axel Witsel would be out for the foreseeable future with an Achilles-injury. According to a study by UEFA, the average downtime for such an injury is 169 days, and, as a result, Witsel will be out for the rest of the Bundesliga season.

With that in mind, it is unlikely that Dortmund will allow any midfielders to leave the club this winter. In fact, the injury to Witsel could provide Brandt with a brilliant opportunity in the coming weeks.

While the 24-year-old is by no means a one-to-one replacement for the Belgian midfielder, playing Brandt in the Witsel role could provide head coach Edin Terzic with an extra spark of creativity that has been lacking for many weeks in Dortmund’s tactical setup. It is a development that spells bad news for Arsenal. But for Dortmund and Brandt, it could provide a new opportunity that could finally fulfill the optimism that came with the signing in the summer of 2019.

Manuel Veth is the editor-in-chief of the Futbolgrad Network and the Area Manager USA at Transfermarkt. He has also been published in the Guardian, Newsweek, Howler, Pro Soccer USA, and several other outlets. Follow him on Twitter: @ManuelVeth

Arbitration Settlement Could Be First Step To Long-Term Deal Between