When it debuted in Chinese movie theaters in December 2019, the action-thriller Skyfire was a bona fide hit. Directed by Con Air helmer Simon West, starring Jason Isaacs and some big names in Chinese cinema, it opened in the box office top spot grossing $24.29 million.

“A big film in the West, an Avengers movie or something like it, will play on something like 4,000 screens, but it’s incredibly rare for most movies to get anywhere near that,” Isaacs enthused. “This thing started on 20,000 screens, just the scale of the country, the numbers of people going to see things.”

You can call Skyfire a hit, you can call it an action movie, but there is one thing you shouldn’t call it.

“The Chinese don’t call them disaster movies; they call them rescue movies because they think that they prefer to focus on the saving element rather than it being the end of the world,” West explained. “I really had to look at Skyfire in a very different way, which was that to me, the volcano was a monster. Every time it turned up, it did something more dastardly than it did before. It even has its own sound effects in the movie. There’s a lot of scary animal noises remixed and sampled to give the volcano personality.”

Skyfire was the first time that West has directed a Chinese movie.  The experience was not entirely what he expected.

“We had an international crew, 17 different nationalities, we shot it in Malaysia, but it was definitely targetted at the Chinese audience,” the filmmaker recalled. “I wanted to have a Chinese cast that the West hadn’t seen, so when the Western audience sees it, they see some of the best actors out of China, and they might become huge and well known over there.”

“It was an unusual opportunity for me, but one thing never changes. The first thing about any project is that there is a story that attracts me. Skyfire had the added aspects that it was a huge and fun canvas to play on, but then there was also the minutiae of how we could actually do it and also do it in Chinese and English. That all started to become horribly real as soon as I said yes.”

Isaacs added, “I had no idea about the work ethic. They were amazed that we had Sundays off because they work seven days a week when they make films. They work until the thing is done, with no days off. I was stunned by that. They have all the kit to do what needs to be done, and they can do special effects very well. Entertainingly, lots of journalists have been asking me what it was like shooting near a live volcano. I never quite know how to answer that one. I don’t want to spoil it for too many people, but there is a volcano in the film. I wasn’t there. To give you an idea of what it was like, we were making something with a village of people, and I was the only person who spoke English. One or two of the actors spoke a little bit of English, but most people around me were talking in Mandarin or other languages, doing what people normally do, but I couldn’t pick any of it up.”

“Also, because the movie involves a volcano, there’s a lot of action, lots of flames and exploding things, rocks and stuff flying around in the air, and when they’re screaming directions at you, they’re screaming in Mandarin. Although I was sure it was completely safe, I was terrified, and I got burned lots of the time because you’re trying to get as close to the fire as possible. There’s a sequence in it in which I’m carrying a young girl, a seven-year-old girl who didn’t weigh much at all when we started, but 200 takes in, she felt like a lead ball. You’re not really fighting a river of lava, but there are real flames, and there’s a lot of running around in smoke. I would get back to the hotel room at the end of the day, and large black lumps of unknown matter would appear from every orifice.” 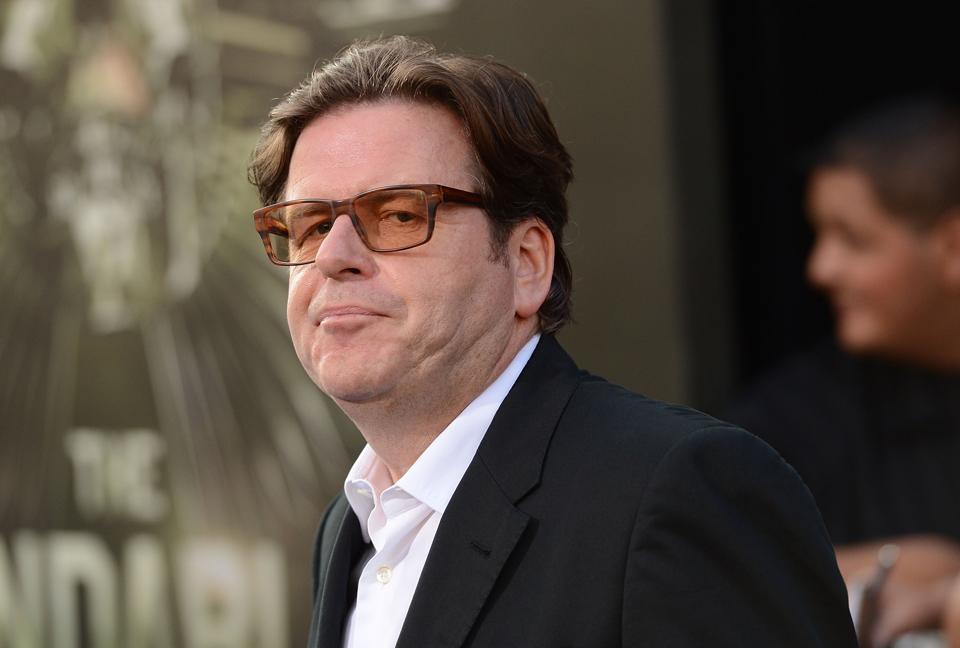 Something West found was that the Chinese were keen to grill him on the Hollywood system of filmmaking.

“Things are cheaper there,” he mused. “The budgets for blockbuster movies are much less than in the West, but you get more for the money. I had the biggest crew I’ve ever had in my life and every piece of equipment you could imagine, yet the budget was a lot less than a Hollywood production. It was a 100-day shoot with 500 people, helicopters, cranes, drones, anything you could imagine was there, and brand new film stages but not at the Hollywood prices.”

“The Hollywood system, which is copied all around the Western world is, is very expensive and time-sensitive. So much planning goes into the process, which can be a good and a bad thing. It means it’s a very efficient shoot, but it can also take some of the spontaneity and magic and creativity out of it, and it becomes a very industrial production line. From my experience, China is still very much in the sort of art movie world even though they are starting to dip their toe in the blockbuster world. They were still approaching them from the point of view of almost making it up as they go along. They’ll have incredibly long shoots, and very little prep, while here we have a lot of prep and short shoots. It’s just a culturally different way of approaching things.”

“They were definitely picking my brains and asking me to make my suggestions as if they did want to make it more of an industrial system and more uniform. I think each production there is very different from every other production there right now. It depends on the director, the style, and it is tough for them to predict what a film will cost or how long it’s going to take to make, or even how it will turn out. In Hollywood, it is all about trying to take out any variable and make it very predictable. The plus here is that it means you get to make a lot of films in Hollywood because people feel more comfortable about putting money into them.”

West continued, “I think Chinese investors can be very nervous because they don’t see a system the way there is in Hollywood. Sometimes they have massive successes, unbelievable huge box office results, and then a lot don’t. While they are definitely looking to see if there’s anything they can learn from the Hollywood system, I did warn them that whatever you do, they shouldn’t just turn it into a sausage factory and forget the creative side. That’s what Hollywood and Western filmmakers are pushing against all the time. We’re asking how we can be creative in this very restrictive bubble.”

Skyfire was apparently originally conceived as the first part of a trilogy of films. Given the film’s success, it wouldn’t come as a surprise if that did happen, but West never saw it that way.

“I think people who are raising the money on the film, they often say that and pitch things out like that, but I would shut that down when it came up,” he confirmed. “I want to concentrate on making a good film. If it’s one good film, that’s great. If it’s so popular that people are demanding a sequel because they want to live in that world more, that’s great too. I’m not against sequels. In the past, I have wanted to do a sequel to movies I have made.”

“Sometimes I’ve felt there wasn’t enough time in the one movie, or you learned a lot about the characters or the world in the first one, and you want to go and explore that more. Unless you’re sort of a Marvel franchise where you have the next decade planned out, and you’re definitely making ten movies, I don’t think it’s necessarily healthy to go into something thinking of it being the first of a few movies. It takes people’s focus off the first one that you’re making, and that one has got to be good on its own. If it’s not, then chances are that you won’t be able to make the others anyway.” 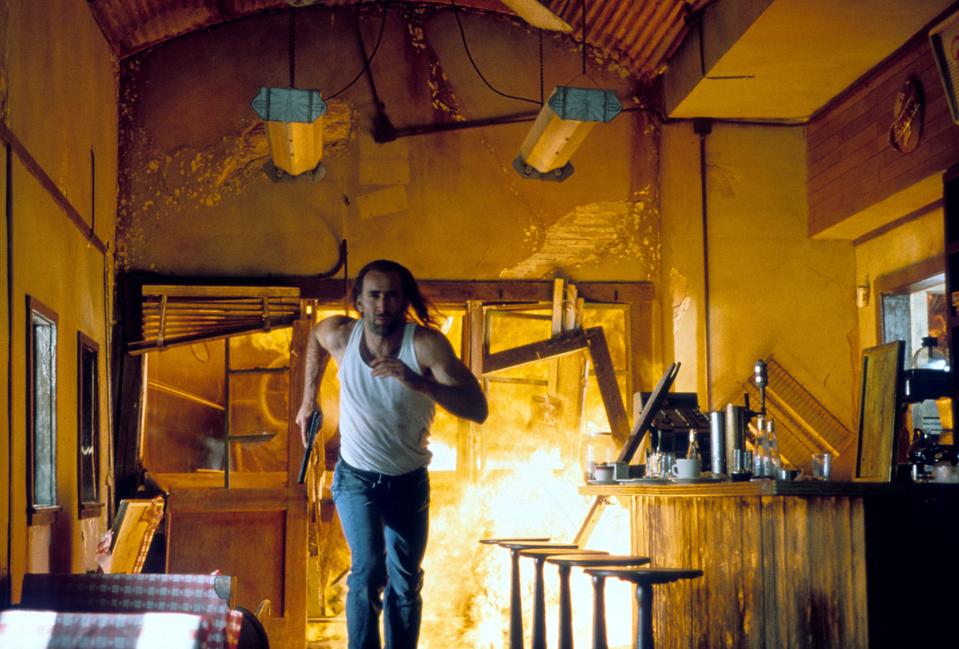 Nicolas Cage running through a burning building in a scene from the film ‘Con Air.’

Another of West’s films, Con Air, is a film that action fans have hoped for a sequel to – and it’s actually the film that brought West and Isaacs together in the first place.

“Simon, who I think is a great filmmaker, called me about a year before we started on this to talk about a different movie that ended up not happening,” the actor recalled. “When this landed in his lap, he called again and said, ‘How about doing an exploding volcano movie in China?’ but I initially met Simon 25 years ago when he was auditioning for Con Air. I went in all young and kind of green and auditioned for the part that I think eventually went to John Malkovich. No surprise there. He’s always nicking my roles.”

“Anyway, there was a gun in the sequence I was doing, I had to hold it to a pilot’s head or something, and I just pulled out something to hold, which I think was a pair of glasses. The guy operating the camera was like, ‘Hold on second.’ He took out a gun, handed it to me, and I think he saw the look on my face and said, ‘Don’t worry. The safety is on.’ I remember being barely able to speak, holding a real gun. When I picked up with Simon again a few decades later, I asked him if he remembered that, and he did. He just said, ‘Of course. How often do you think that happened?’ It was crazy.”

So could West return to Con Air decades later and give fans what they have wanted for so long?

“People have asked me if I would, but I have never pushed it,” the director explained. “I would say it’s very difficult because it was very much of its time and all those actors were in that moment. There’s no reason you couldn’t make another one, but do you really want to? Would it ever be as satisfying? It would have to be so different and fresh that it wouldn’t really be a sequel; it would just be a reimagining, which is often the better way to do it than a traditional sequel.”

“With a reimagining, it’s like, ‘Let’s just throw out all the rules, anything can happen,’ but it’s just got the number two to the end of the title. I think there’s no reason why those actors, the writer, and I can’t all make another film together, but it doesn’t have to be a Con Air sequel. Con Air did what it needed to do, and it’s great that people still love it.”