Investors are reducing bets on extreme volatility in currency markets around the U.S. presidential election.

With the days running out and former Vice President Joe Biden holding a steady lead in the polls, asset managers are unwinding positions in foreign exchange that paid out if markets went haywire around the vote. Volatility in currency pairs has declined after a September spike when investors scooped up options strategies to protect them against big swings in the dollar and stock markets.

Many on Wall Street expect Democrats to end up with control of the White House and both houses of Congress, reducing the odds of a disputed or divided outcome while increasing the odds of further fiscal stimulus and greater government spending.

“Foreign-exchange markets are more confident in a Biden victory and to some extent a Blue Wave as well,” said Mazen Issa, a currency strategist at TD Securities. “Election uncertainty, while prevalent, has subsided.”

Derivatives tied to the Japanese yen—often a haven for nervous investors—have dropped in price, as measured by the cost for straddles. Straddles are a popular strategy that involves buying both bullish and bearish options that pay out if one currency climbs or drops significantly against the other. 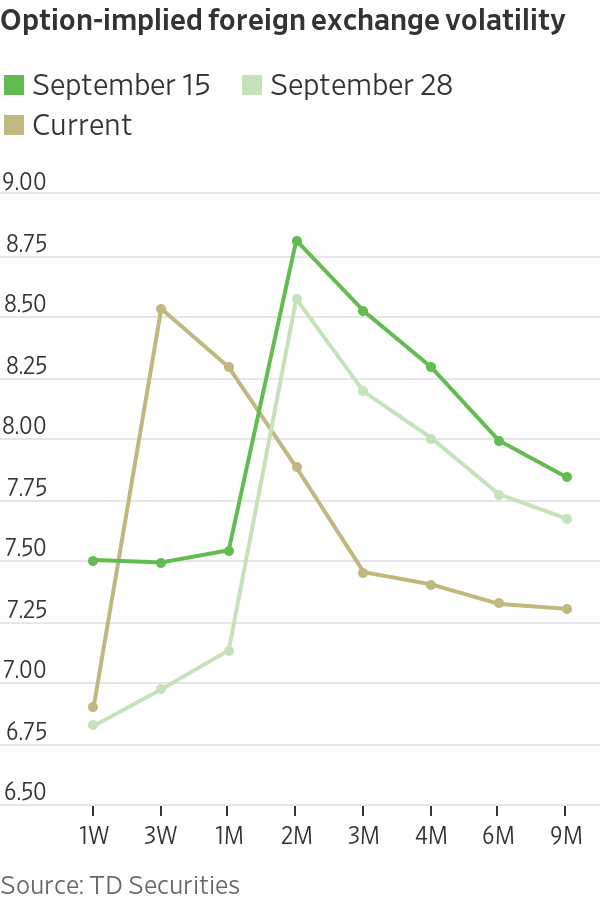 Another sign that investors are less concerned about swings extending out past Election Day: Currency volatility curves, which measure the difference in price between options at various points, have flattened. A month ago, traders had to pay more to buy options extending through November than October.

Analysts say the premium for options across asset classes including equities has generally declined over the past couple of weeks, with poll averages showing a steady Biden lead.

Morgan Stanley
research strategists have upgraded the probability that the election results will become known on the day itself, while lowering the odds of a dragged-out vote counting that could last a month.

“There is less probability of a contested election if the race isn’t tight,” said James Lord, head of foreign exchange and emerging markets strategy at Morgan Stanley. “That dynamic has not been lost on the options market.”

The WSJ Dollar Index, which measures the greenback against a basket of currencies, traded at 88.10 late Monday.