Bruce Burnworth used to clip coupons and look for deals before his investment in
Tesla Inc.
made him a millionaire.

He is part of a widening class of affluent Americans who are doubling, or even tripling, down on this year’s highflying stock market. The S&P 500 has soared 66% since bottoming in March in the early days of the Covid-19 pandemic, while dozens of individual stocks, like Tesla, have surged even higher.

Some investors have been tempted to chase bigger gains—and have exposed themselves to potentially devastating losses—through riskier plays, such as concentrated positions, trading options and leveraged exchange-traded funds. Others are borrowing against their investment portfolios, pushing margin balances to the first record in more than two years, to buy even more stock. 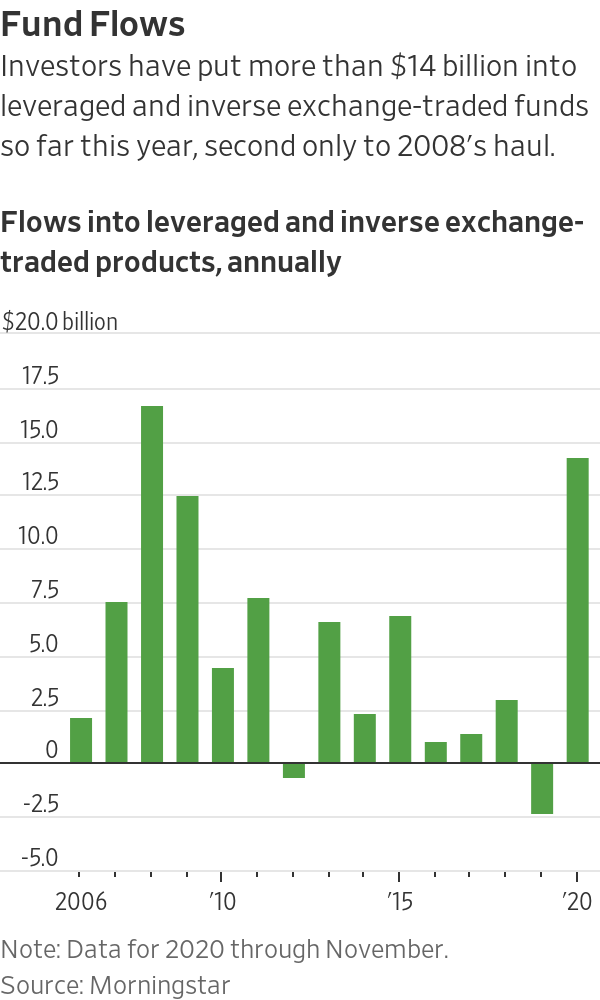 Mr. Burnworth, a civil engineer in Incline Village, Nev., who is nearing retirement age, is using all of those strategies after turning a roughly $23,000 options gamble on Tesla last year into a nearly $2 million windfall. His growing Tesla stake had enabled him to borrow against his position to convert Tesla options into shares that have soared sevenfold this year. He says he also helped his daughter buy a home and purchased a Tesla sport-utility vehicle for another family member.

“Before, I wasn’t doing particularly well financially, Now, I’m well beyond where I wanted to be for retirement,” said Mr. Burnworth, who added that he also sold his own home and used some of the proceeds to buy more Tesla options.

The stock market is on the verge of closing out one of its frothiest runs in years. Some of the biggest fortune makers include Tesla, up 691% so far this year, and fuel-cell company
Plug Power Inc.,
more than 1,000% higher.
Zoom Video Communications Inc.
has added 451%, while scores of biotech stocks have also soared, including Covid-19 vaccine maker
Moderna Inc.,
up 532%.

“The stock market is euphoric right now,” said James Angel, a Georgetown University finance professor. “A lot of people are extrapolating from the recent past and going, ‘Wow, the market’s gone up a lot and I think it’ll go up more.’ We’ve seen this play out before, and it doesn’t end well.”

In the final week of 2020, investors will be watching for last-minute changes to a Covid-19 relief package after President Trump demanded higher payouts for Americans. The pandemic itself remains in focus as cases, hospitalizations and deaths soar across much of the country.

A strong indicator of stock-market euphoria flashed red last month. Investors borrowed a record $722.1 billion against their investment portfolios through November, according to the Financial Industry Regulatory Authority, topping the previous high of $668.9 billion from May 2018. The milestone is an ominous one for the stock market—margin debt records tend to precede bouts of volatility, as seen in 2000 and 2008. 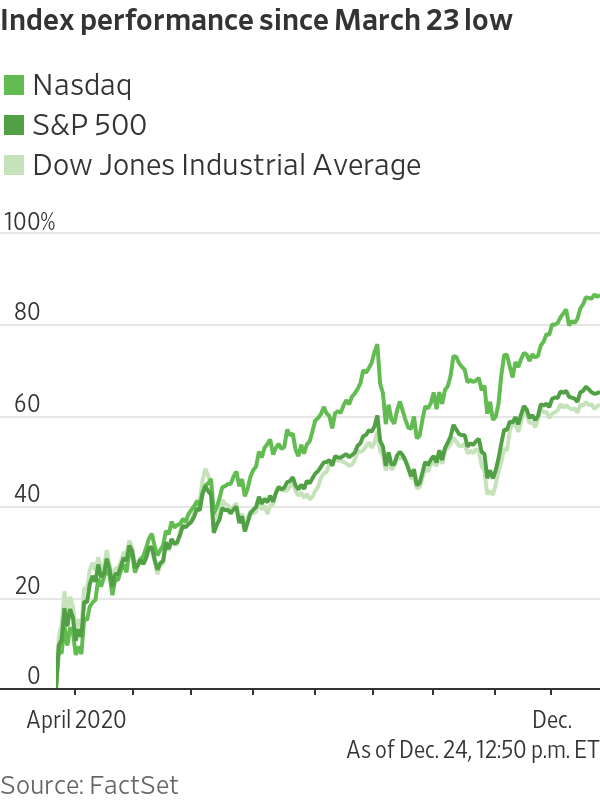 Investors using margin debt pledge their securities in exchange for loans from brokerage firms to make further investments. They can get into trouble if their collateral falls below a certain threshold, triggering a margin call. They then have the option of either putting up more money or selling the securities underlying the loans.

Many investors also use their margin balances to trade options, contracts that give them the right to buy or sell shares at a specific price, later. Options trading exploded this year as individual investors flocked to the stock market. A record number of options contracts have traded this year. An average of 29 million changed hands each day this year, a 48% jump from 2019, according to data from Options Clearing Corp.

Traders can tap options to hedge their portfolios from stock declines or make bets that major indexes and individual companies will go up or down in value. Using some of the riskier strategies, traders can also lose more than they put in.

Mary Roberts made her first big investment last year, using some spare cash and a leftover retirement account from a previous job to buy up shares of Tesla. Like Mr. Burnworth, her investment portfolio swelled in value this year as the electric-car maker’s stock ran up, leading her to dabble in options trading for the first time using margin debt.

“Having [shares of] Tesla enabled me to do all of this stuff. This was life-changing,” said Ms. Roberts, who is 53 years old and lives in Vancouver, Wash. She and her husband run a chemicals-distribution business that she says has struggled because of Mr. Trump’s trade war with China. Between her investments and her spouse’s, their combined portfolio is now worth seven figures, with two-thirds of that consisting of Tesla stock, Ms. Roberts said.

She says she doesn’t think she will see another year of gains quite like 2020 soon. But she has no plans to sell any of her Tesla stock either and is open to the idea of borrowing more against her portfolio.

“This is what wealthy people do,” Ms. Roberts said.

Of course, individual investors who overextend themselves have been burned before. Scores of investors lost money this year on gambits that backfired, including when oil prices turned negative and shares of
Eastman Kodak Co.
went on a wild ride.

Joe Phoenix’s crash came in 2018. He had bet heavily against the prospect of volatility resurfacing in the market, amassing more than $1 million using exchange-traded products that delivered the inverse of the Cboe Volatility gauge, or VIX. The products amplified daily moves by three times. And he made a risky bet even riskier by using margin debt.

A spike in volatility in February 2018 wiped out a significant chunk of his gains, knocking his holdings into the hundreds of thousands of dollars. Mr. Phoenix said the devastating loss shook him out of the market by the end of the year. He started trading again by the middle of 2019 after promising himself that he wouldn’t take on that much risk again.

Is using debt to bolster investment portfolios a good idea, or not? Join the conversation below.

He still trades leveraged ETFs, though. Those products attracted $14.3 billion this year through November, the most since 2008, from investors drawn to the prospect of doubling or tripling the daily moves of the S&P 500, the top 100 Nasdaq stocks and other indexes. The moves work both ways, with such funds falling as much as 15% on some of the market’s worst days this year.

Mr. Phoenix adds that the products give him all of the benefits of margin debt without the worry of a margin call or paying interest.

“This year, I’ve done pretty darn well as far as my emotional reaction to things and being able to cut loose the losers,” said Mr. Phoenix. He said he is up more than 12% since he resumed trading. “If I can do more than 8%, I’m doing pretty good.”

Man who punched cop during Capitol riot has brother in