One of the best ways to make money on Wall Street recently has been to bet against the fossil-fuel industry and buy renewable-energy stocks. Two well-regarded investors believe the trend will accelerate after President-elect Joe Biden takes office.

Mr. Biden wants to transition the U.S. from an economy reliant on fossil fuels to one driven by wind, solar and other renewable-energy sources.

The shift from fossil-fuel companies to renewable-energy firms accelerated during the Trump administration, despite the president’s vows to support the U.S. coal and petroleum industries.

Mr. Biden’s agenda could further accelerate the shift, even if a Republican-controlled Senate prevents major legislation or a green-oriented stimulus from passing. Investors already are pushing toward clean energy and Mr. Biden can give them a boost by tightening regulations and issuing executive orders banning new permitting of drilling projects on public lands.

Two factors are driving the shift: Big and small investors have moved their assets away from fossil-fuel producers and toward renewable energy companies. Big investors like BlackRock Inc., the world’s largest asset manager, overseeing $7.8 trillion, have said they plan to take into account corporations’ disclosures of environmental risks, including carbon footprints.

Small investors have poured cash into sustainable funds. In the third quarter, they put $80.5 billion in the sector globally, a 14% increase from the previous quarter, according to Morningstar. Sustainable funds had $1.26 trillion in assets at the end of September, up 19% from the second quarter. 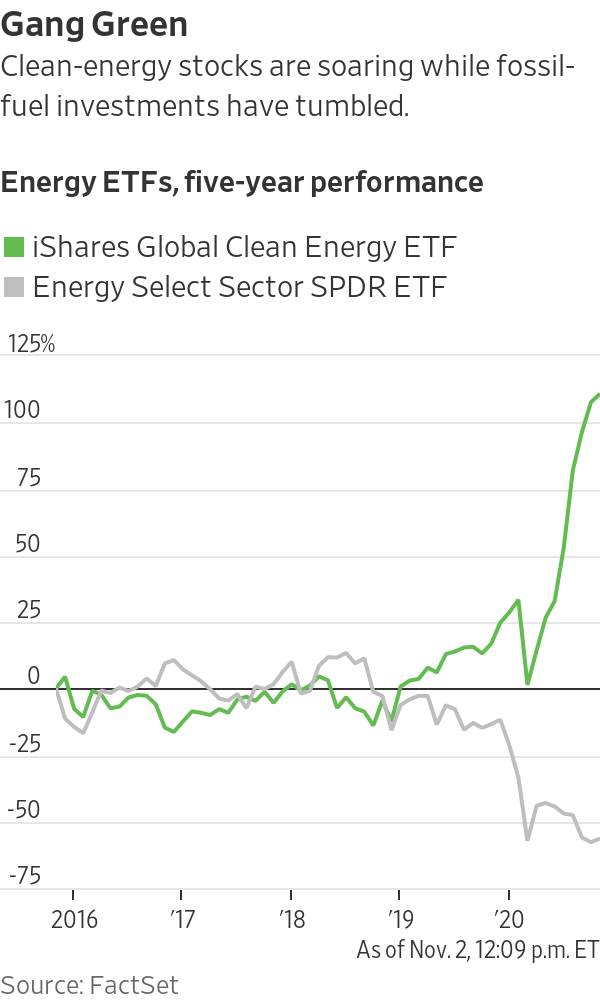 Another big factor is cost. The International Energy Agency said in its 2020 world energy outlook that solar-energy projects “now offer some of the lowest-cost electricity ever seen” and are consistently cheaper than new coal and gas-fired power plants in most countries. The U.S. Energy Information Administration projects that renewables will be the most-used energy source in the world by 2050.

The result has been a significant outperformance of strategies that invest in assets that lead to lower carbon emissions. The iShares
Global Clean Energy
exchange-traded fund has doubled in value in the past five years, compared with a roughly 50% decline in the
Energy Select Sector SPDR Fund
over the same period. The energy fund surged Monday following positive vaccine news.

In early October,
NextEra Energy Inc.,
the U.S.’s largest renewable-energy company, surpassed the market valuation of
Exxon Mobil Corp.
The shift was a milestone in a market trend that has been building for years. The biggest U.S. company by market cap just seven years ago, Exxon has coughed up more than half of its value since then. NextEra shares, meanwhile, have more than tripled in the same period. The Florida power producer gets much of its growth from renewable energy and its 15,000 megawatts of renewable projects in development is larger than its entire existing renewables portfolio.

How do you see policies on carbon use changing under a Biden administration? Join the conversation below.

Some investors are betting these trends will continue. Robert Litterman, a former
Goldman Sachs Group Inc.
investor and risk manager, launched a strategy in August designed to profit from a rapid transition to a low-carbon economy. The strategy, started by Kepos Capital, the $2 billion trading firm Mr. Litterman helped found, has gained about 4% since its launch as of late October, according to a person familiar with the investments.

It isn’t a new strategy for Mr. Litterman. In 2014, the World Wildlife Foundation, on Mr. Litterman’s advice, invested in a derivative instrument that bet that a basket of fossil-fuel assets would underperform the broader market. The investment has posted an annualized return of 22% since then, according to a spokesman for the foundation.

A Biden administration, he says, will weigh on returns for fossil-fuel companies. Mr. Biden has said he would take billions in federal subsidies away from fossil-fuel companies. He also has indicated that he might consider putting a price on carbon emissions along with an enforcement mechanism that will make carbon emitters “bear the full cost of the carbon pollution they are emitting,” according to his climate plan.

Mr. Jampel said that around 2017, he and his partners were trying to decide whether a decline in fossil-fuel assets that had been going on for several years was likely to continue. “We came to the realization that it’s likely to get worse,” he said

Supply of fossil fuels was growing while demand was “likely to flatten and decline,” he said. Another reason, he said, is the likelihood that China will push ahead developing renewable-energy resources because it is a net importer of oil and gas.

He added that tax and regulatory authorities, particularly in Europe, were turning against carbon-based energy and providing incentives to alternative-energy sources.

The $185 million fund, launched in 2018, bets that carbon-intensive energy companies are likely to lose value, while wagering that the broader market will gain in value, Mr. Jampel said. The fund gained 10.8% in 2018, 6.6% in 2019 and was up 35.3% this year through October, according to a person familiar with the returns.

Former Vice President Joe Biden sparred with President Trump on fracking during the final presidential debate, saying he would push for the oil industry to be replaced by renewable energy over time and eliminate federal subsidies for the industry. Photo: Chip Somodevilla/AFP

Write to Scott Patterson at scott.patterson@wsj.com

2 hurt after rented red Ferrari wipes out on Chicago