The economy continued to add back jobs last month. Will that still be the case come January?

The Labor Department on Friday reported that the U.S. gained 638,000 jobs in October while the unemployment rate fell to 6.9% from 7.9%. The jobs increase was only modestly below September’s addition of 672,000 jobs. Even so, the country remains in a deep hole, with 10.1 million fewer jobs than in February, before the pandemic.

The monthly employment report, normally the most closely watched economic release on Wall Street, was overshadowed by the continued counting of votes in the election, with former Vice President Joe Biden looking increasingly certain of taking the White House. By the time the president is inaugurated in late January, there is a danger that the job market will again be deteriorating. 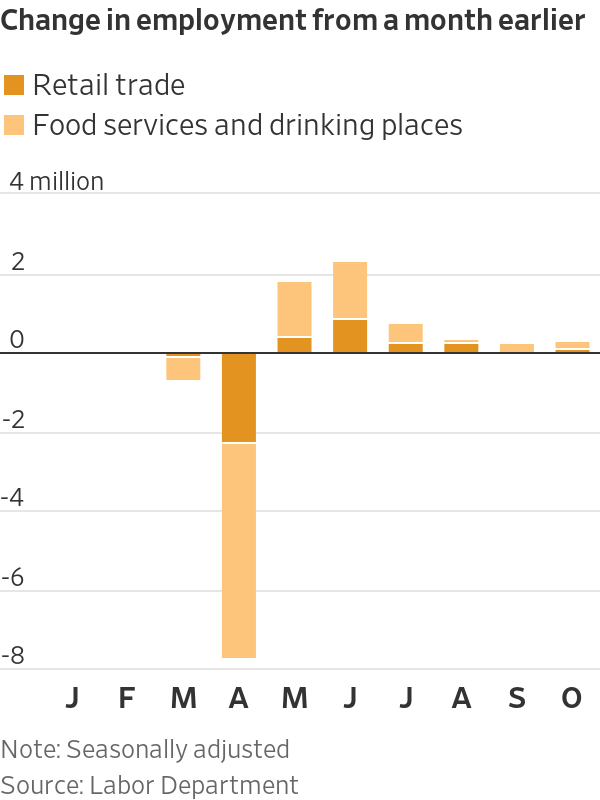 As in recent months, industries with some of the biggest job gains in October were those that were hit hardest in the early days of the pandemic. Retailers added 103,700 jobs to their payrolls; food services and drinking places added 192,200. Those industries are unfortunately also the ones facing some of the biggest challenges in the months ahead.

The holidays are approaching—a period when retailers typically add workers to handle the shopping rush. In the adjustments it makes for seasonal swings, the Labor Department anticipates this phenomenon, lowering the raw retail jobs figures to better capture the industry’s employment trend.

But this year, with sales down sharply and many people wary of shopping in person, that jump in hiring might not come. Smaller retailers with limited or nonexistent e-commerce operations could be especially cautious on hiring. And for those that traditionally rely heavily on holiday sales to take their businesses into the black for the year, some may be facing hard choices in January on whether to stay open.

Restaurants and bars, meanwhile, could be hindered by both colder weather, which will make outdoor dining less feasible,  and the rise in Covid cases that looks likely to only worsen in the weeks ahead.

The Covid surge is a problem for other industries, too, and even if state and local authorities don’t respond to rising case-counts by tightening restrictions, it will likely lead to renewed caution on the part of many households, hurting economic activity. And though there is a chance that Congress and the White House can put together some sort of fiscal stimulus package before the end of the year, there would still be a bit of a lag before it moved the needle on the economy, or the labor market.

It has been a long election season. By Inauguration Day, the economy could be in the midst of a long and trying winter.