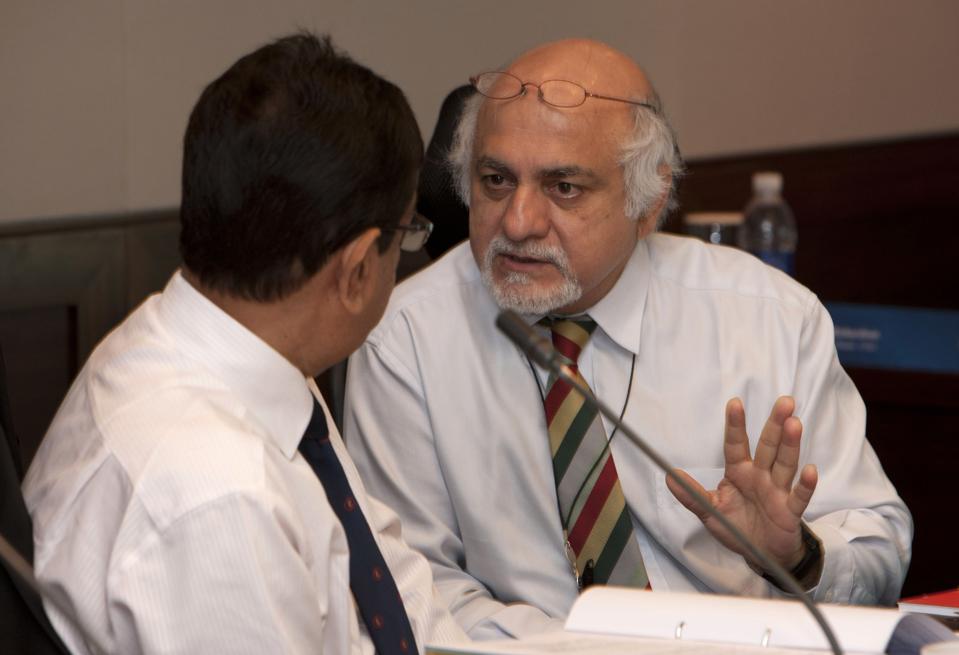 Imran Khwaja is set to contest the ICC leadership. (Photo by Jack Dabaghian/Getty Images for ICC)

International Cricket Council (ICC) interim chairperson Imran Khwaja is set to contest the leadership of the sport’s global governing body in what shapes as a two-horse race with New Zealand’s Greg Barclay.

After months of speculation since Shashank Manohar departed as chairperson mid-year, Khwaja and Barclay, according to sources, are expected to be nominated by current board directors on Sunday (October 18) and officially accept the nominations by mid-week. Under current rules, a nominee for chairperson has to be either a past or present director.

While it is shaping as a battle between Khwaja and Barclay, a third candidate could emerge as a “tactical approach”, according to sources. If nominated – and seconded, per the rules – as expected, former Singapore Cricket Association president Khwaja will run for cricket’s top job, according to sources. He is striving to be the first ICC leader from outside the Full Member nations – the 12 elite countries in cricket’s tiered system – but has been the interim chairperson for more than three months.

The pragmatic Khwaja has done the hard yards through being a long-time presence on ICC boards and committees. The 64-year-old is seen by his backers as having the “independence” and “integrity” needed to safeguard cricket through a tumultuous period, where the ICC is expected to work through progressive reform to address financial inequity among nations – with fears rising for the future of smaller cricket countries due to the Covid-19 pandemic.

Under Manohar and Khwaja’s leadership, the ICC had initiated a more inclusive approach and somewhat diminished the heft of the ‘big three’ – India, England and Australia – which pushed the much derided power grab and skewed financial distribution formula in 2014.

There is, however, some reluctance over someone not from a Full Member ascending to the top and there is believed to be renewed vigor from the ‘big three’ to once again grab the reins. After much media speculation, India’s governing body won’t push forward a candidate.

Recently departed England boss Colin Graves had for some time been touted as the frontrunner – and supposedly boasting ‘big three’ support – but his potential candidacy nosedived recently. Barclay, a director of New Zealand Cricket (NZC) since 2012, has emerged as the “compromise candidate” – as dubbed in the Indian media – of the ‘big three’.

Cricket in New Zealand has been long hailed as well run underlined by the continual success of the men’s national team, who came within inches of being World Cup champions last year.

NZC, however, did not oppose the unpopular power moves of the ‘big three’ in 2014. “There’s no point taking India on head on; it’s just not going to work,” Barclay said in 2016. “They make the money along with, to a lesser extent, England and Australia.

“We had to look at it from a pragmatic and commercial perspective. From our point of view, nothing stays as it is. There was always going to be changes.”

Greg Barclay of New Zealand (L) is likely to battle for the ICC leadership. (Photo by Mark … [+] Runnacles-ICC/ICC via Getty Images)

The contest will be held through a secret ballot next month but if a winner is not determined after three attempts then Khwaja will automatically be the chairperson for the next 12 months.

An ICC governance review would need to be undertaken to go through the election process.