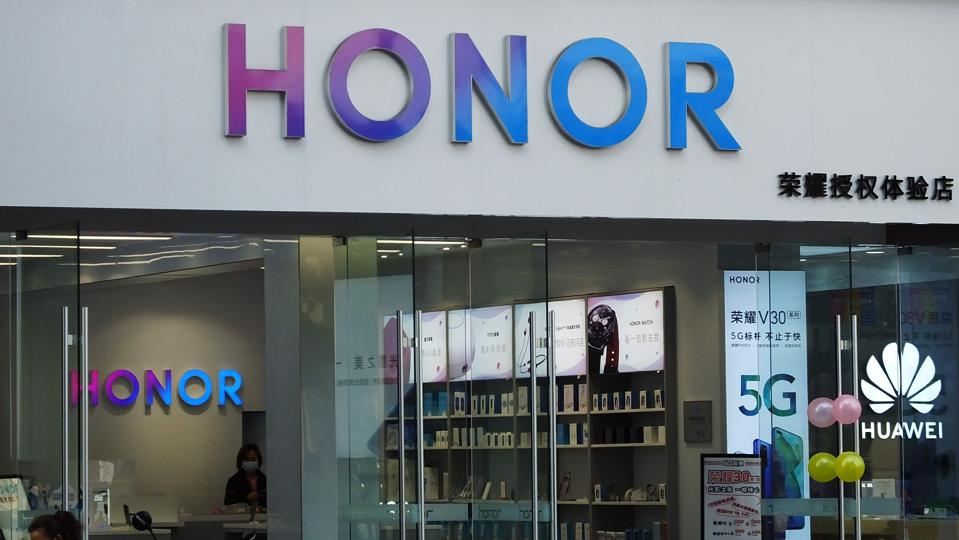 A Huawei Honor store is pictured on November 11, 2020 in Yichang, Hubei Province of China.

Huawei, the Chinese telecom giant once ranked as the world’s largest smartphone maker and increasingly squeezed by Washington, announced Tuesday that it would sell its budget handset brand Honor to a government-backed consortium in a bid for the unit’s survival.

Huawei has been struggling to overcome restrictions on crucial chip technologies by the U.S., which calls the company a national security threat. By breaking off, Honor can get smartphone supplies without Washington’s blockade, but will lose access to Huawei’s resources and may even face new U.S. restrictions in the longer term, analysts warn.

“This move has been made by Honor’s industry chain to ensure its own survival,” Huawei said in a statement. “Huawei’s consumer business has been under tremendous pressure as of late. This has been due to a persistent unavailability of technical elements needed for our mobile phone business.”

Shenzhen Zhixin New Information Technology is set to buy all Honor assets to “help Honor’s channel sellers and suppliers make it through this difficult time,” according to the statement. The buyer comprises more than 30 “agents and dealers” of the Honor brand.

Is Trump Taking A Page From Thailand’s Playbook?

Shenzhen Smart City Technology Development said in its own statement the investment is “market-driven” one aimed at saving Honor’s “industry chain,” including suppliers, sellers and consumers.

The sale will let Honor “get the ball rolling” on getting supplies, says Kiranjeet Kaur, a Singapore-based senior research manager at IDC’s Asia Pacific client devices group. But it will miss the “synergy” it had established behind the scenes with Huawei, she notes. The two had shared R&D and original design manufacturing. “I’m not sure how easy it’s going to be for Honor to detach from that,” Kaur says. “I’m not sure how Honor is going to differentiate in the market from Huawei.”

The consortium’s state influence could land Honor in trouble if it wants approval from the U.S., Kaur adds.

“The fact that there is no strategic investor behind the deal, but rather a consortium of players, many of which are related to the government, sheds light on some of the deal rationale,” says Alexander Sirakov, an independent Chinese financial technology analyst.

Huawei has hoped that a sale will give it an infusion of cash while protecting Honor itself from more U.S. sanctions, experts said last week when news first broke about a possible sale. Huawei’s billionaire founder and CEO, Ren Zhengfei, had said last year that U.S. sanctions would cause company revenue to drop by billions of dollars.

Last year, the U.S. Department of Commerce added Huawei to an entity list of companies that are barred from doing business with organization in the U.S. An order that took effect two months ago placed 38 Huawei affiliates to the list and restricts transactions where U.S. software or technology would help develop the Chinese company’s hardware.

U.S. President-elect Joe Biden is not expected to cancel action against Huawei at the start of his term next year as he focuses on domestic issues, analysts said last week, but he might not add sanctions.

Huawei’s statement does not disclose a selling price or mention the U.S. sanctions. A spokesperson for Huawei said the acquisition price has not been set yet.

Honor was launched in 2013 as a budget brand to compete with Chinese rivals and sold throughout developing markets in Asia at an average price of $156. Honor has kept costs low and saved money by selling most of its phones online. Huawei would ship more than 70 million Honor phones annually. “We hope this new Honor company will embark on a new road of honor with its shareholders, partners, and employees,” the Huawei statement says.

Huawei was ranked No. 2 in the world and No. 1 in China in the third quarter by IDC. It had reached the top spot in the previous quarter for its first time.