LONDON—
HSBC
Holdings PLC’s net profit fell in the third quarter as the coronavirus ravaged the global economy and political tensions between the U.S. and China intensified over Hong Kong.

The London-based bank with Asian roots said net profit fell 54% to $1.36 billion in the three months ended Sept. 30, from $2.97 billion in the same period last year. HSBC set aside $785 million in provisions for bad loans in the quarter, less than a third of the amount set aside in the previous three months.

In addition to navigating the pandemic, HSBC is embroiled in a political clash between Beijing and Washington over the status of Hong Kong. When HSBC’s top Asia executive endorsed China’s extension of a national-security law to the port city in June, Secretary of State Mike Pompeo described the act as a “show of fealty.”

“Geopolitical risk, particularly relating to trade and other tensions between the U.S. and China, remains heightened,” HSBC said Tuesday. “Investor and business sentiment in some sectors in Hong Kong remains dampened and ongoing tensions could result in an increasingly fragmented trade and regulatory environment.” 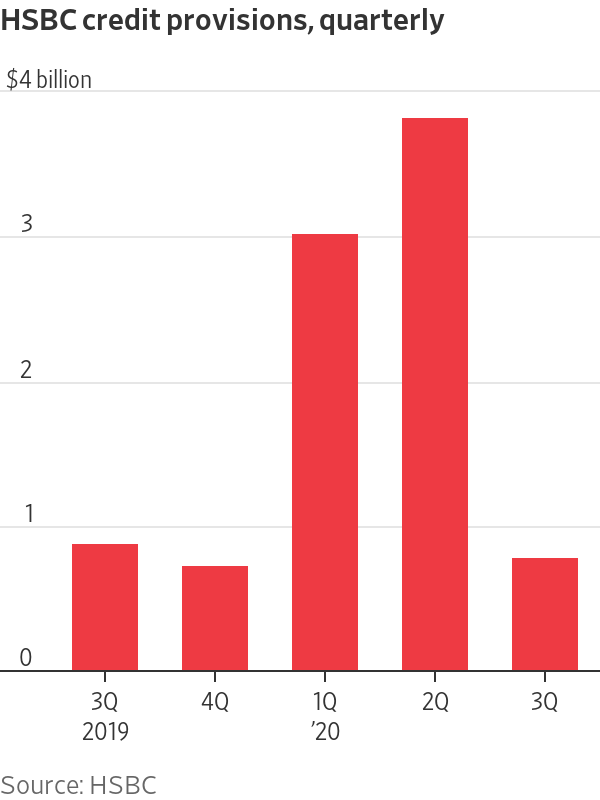 HSBC also angered Chinese authorities by sharing information about Chinese telecommunications-equipment company Huawei Technologies Co. with U.S. prosecutors in 2016. Investors are concerned the bank could be put on an “unreliable entities” list in China that would threaten its plans to expand its retail and commercial banking in the world’s most populous nation.

Such a move by Chinese authorities would complicate HSBC Chief Executive Noel Quinn’s strategy of refocusing the bank on its Asian heartland, where it makes most of its profit. Mr. Quinn said in February that he plans to shed 15% of the bank’s 235,000-strong workforce by cutting business lines and customer relationships in the U.S. and Europe. HSBC was founded in Hong Kong in 1865 and moved its headquarters to London in the 1990s.

HSBC’s decadeslong strategy of expanding across Europe, Asia and the Americas is “defunct,” Manus Costello, a banking analyst at Autonomous in London, wrote in a note in September. “The intention to generate profits from outside Asia has largely failed.”

Shares of HSBC have fallen 46% this year and recently touched a 25-year low. Many other bank stocks have tumbled as the coronavirus wreaked economic damage and forced central banks to slash interest rates, which makes it harder for lenders to earn profit. The Stoxx Europe 600 Banks index has fallen 39% this year. HSBC shares on Tuesday rose 5.3% in Hong Kong.

Mr. Quinn said the third-quarter results were promising because of the lower credit losses and strong capital and liquidity levels.

The bank said it may pay a “conservative dividend” for 2020 if regulators permit it. The Bank of England this year told U.K. banks not to pay dividends to conserve cash during the pandemic.

HSBC set aside $3.83 billion and $3 billion in provisions for losses from loans in the first and second quarters, respectively, making a total of $7.64 billion so far this year. There is a risk of additional fourth-quarter provisions if the U.K. and European Union fail to reach a trade agreement by the end of the year, HSBC said.

Write to Simon Clark at simon.clark@wsj.com