Enlarge / A reconstruction of the cosmic web— a vast network of filamentary structures of matter spanning the universe—modeled on the growth patterns of slime mold.
Joseph N. Burchett et al./AJL
There’s rarely time to write about every cool science-y story that comes our way. So this year, we’re once again running a special Twelve Days of Christmas series of posts, highlighting one science story that fell through the cracks in 2020, each day from December 25 through January 5. Today: how physicists used the growth patterns of the humble slime mold to model the dark matter that makes up the filaments of the cosmic web.

The backbone of our cosmos is a vast network of interconnected giant filaments, with huge voids in between. Most of the material that makes up this “cosmic web” is dark matter, along with diffuse and distant gas. Earlier this year, a team of scientists at the University of California, Santa Cruz (UCSC), devised a unique approach to modeling this cosmic web, based on the growth patterns of slime mold, and found some striking similarities. They described their approach in a March paper published in The Astrophysical Journal Letters.

“We don’t think the universe was created by a giant slime mold,” co-author Joseph Burchett told Ars, dashing our hopes of a novel new creation myth. “This really comes down to the similarities of the products of these two very disparate processes. At the end of the day, the similarities arise in the optimality of nature.”

Slime molds are sometimes mistaken for fungi, but technically they are a type of amoeba: single-celled organisms that lack neurons, never mind brains. Yet they are capable of some surprising feats, prompting some scientists to ponder whether they might nonetheless be capable of some kind of primitive cognition. There are many species of slime mold (more than 900, in fact); in this case, we’re talking about Physarum polycephalum, an oozing, spongy yellow-colored slime mold usually found growing on the forest floor, or on decaying logs.

Prior studies have shown slime molds are capable of solving mazes and escaping from traps, for example, as well as making simple decisions. And in 2010, scientists let a slime mold loose in a Petri dish containing bits of oatmeal (a favored food) representing Tokyo railway stations, and found they were able to recreate that transport network—essentially finding the optimal routes.

When researchers place food at cities on the map, the slime mold collaborates, spreading out to map many possible configurations and then dying away to highlight the shortest routes between cities and the most efficient overall system map.

At first glance, slime molds seem very far removed from the cosmic web, however. As Matthew Francis explained at Ars Technica back in 2014:

Early in its history, the Universe had no stars or galaxies, and the density of all matter was remarkably uniform. However, tiny fluctuations in this density—as observed in the cosmic microwave background—led to small regions where the amount of dark matter was slightly higher than elsewhere. Those slight overdensities in turn attracted more matter, producing a slow cascade: some places collected a lot of dark matter and gas, while others were largely emptied out.

According to sophisticated supercomputer simulations, the result was the cosmic web: nodes of dark matter linked by thinner filaments, with vast voids between. Galaxies and clusters of galaxies formed in the denser regions from gas attracted by the gravitational pull of dark matter. The resulting web is termed the large-scale structure of the Universe, and much of observational cosmology involves the process of mapping this cosmic web in three dimensions…. The filaments connecting everything together are fundamentally difficult to observe. That’s because they contain a lot of dark matter, relatively little gas, and few or no stars. Astronomers discovered some filaments by measuring the light absorbed by the gas; others have used gravitational lensing from the dark matter.

Per Burchett, the slime mold work started as an archival data analysis project funded by the Hubble Space Telescope to study the distribution of gas within the cosmic web—i.e., “the storehouse of gas, of fuel, out of which galaxies form,” he said. While astronomers can identify the nodes of this web in the form of dark matter halos surrounding galaxies, the connecting threads have proven more challenging to spot. Burchett planned to use background quasars to essentially “light up” the foreground gas, but found it difficult to design a reliable algorithm to find those filaments within large sets of observational data.

“The problem you inevitably encounter is, where do I draw the cosmic web?” he said, because “the real backbone of the cosmic web is dark matter. The diffuse gas that’s permeating the dark matter structure is really the only way we have of detecting the matter.” Burchett has found that the most sensitive approach is to use the background quasars. “Even then, you have to detect the gas as a shadow you see in the background’s quasar light,” he said.

Burchett mentioned this line of research over beers with fellow UCSC postdoc Oskar Elek. Further inspiration came from an unlikely source. Elek’s mentor, Angus Forbes (another co-author) told him about the work of a Berlin-based media artist named Sage Jenson, who was using computer simulations of slime mold growth to create art, based on a 2010 paper by Jeff Jones in the Artificial Life Journal.

Elek was struck by the growth patterns of the slime mold in Jenson’s creations (you can see examples on her Website), which featured the same kind of filamentary characteristics of the cosmic web. He and a programmer pal created a 3D version of the simulation for slime mold growth—dubbed the Monte Carlo Physarum Machine (MCPM)—and they plugged in a dataset of 37,000 galaxies from the Sloan Digital Sky Survey (SDSS), just to see what would happen. 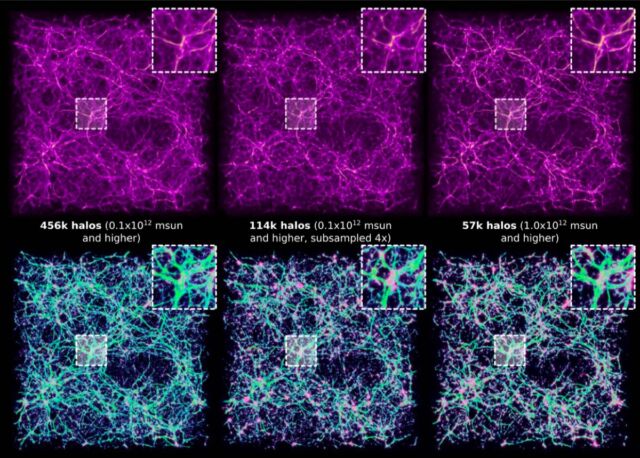 Burchett admits to being a bit skeptical when Elek first broached the possibility, given the already substantial body of work using more traditional modeling approaches. But the results worked surprisingly well. “Visually, it’s really striking,” said Burchett. “You can intuit where filaments should be if you just look at a map of galaxies in the sky, and the slime mold model fit that intuition very well.” Just as the slime mold creates an optimized transport network, finding the most efficient pathways to connect food sources, the growth of structure in the cosmic web produces similar optimal networks. The underlying processes for each are different, but they produce analogous mathematical structures.

That said, “It’s not that somebody has proven that there is a hard, mathematical reason why the cosmic web should be an optimal transport network,” Elek  told Ars. “It just approaches it. It was more an intuitive gut feeling that brought these things close enough to actually make them work.”

To verify the results from the MCPM, Burchett et al. built a catalog of dark matter halos based on data from a classic cosmological simulation, then ran the algorithm to reconstruct the filamentary web connecting those halos. The results strongly correlated with the original cosmological simulation. That enabled the team to further refine their slime mold model. As yet another “sanity check,” the team also compared the slime mold model’s prediction of gas densities in the intergalactic medium to star formation activity in galaxies included in the SDSS.

Finally, they tested their model’s predictions for the cosmic web’s structure against UV data from 350 quasars from the Hubble Space Telescope’s Cosmic Origins Spectrograph. “We knew where the filaments of the cosmic web should be thanks to the slime mold, so we could go to the archived Hubble spectra for the quasars that probe that space and look for the signatures of the gas,” said Burchett. “Wherever we saw a filament in our model, the Hubble spectra showed a gas signal, and the signal got stronger toward the middle of the filaments where the gas should be densest.”  And as expected, the signal dropped off in the densest regions, where the gas gets so hot, it becomes ionized, eliminating the absorption signature.

There’s still more interesting research to pursue based on the MCPM’s success. Burchett has turned his attention from mapping the gas in the cosmic web filaments to the galaxies themselves, pinpointing how well their properties correlate with where they are located within the cosmic web. As for Elek, he views the slime mold model as a “structure finder,” and is exploring how to potentially apply it to bioprinting, among other uses.

“We see this as the tip of the iceberg of what we can do scientifically,” said Burchett. “This is splitting off all sorts of cool applications both within and outside of astrophysics.”

How The New York Knicks Could Win The 2021 NBA