Last year, Ugur Sahin flew to New York to woo investors for his company’s initial public offering. The chief executive officer of German biotech firm
BioNTech
SE impressed investors with his plans to use a new technology to develop cancer vaccines and treatments.

Then the investors dug into the data. BioNTech was founded in 2008 but had little to show for its work, some investors concluded. At that point, just 250 patients had been treated with the company’s vaccines. Others doubted BioNTech was any better than
Moderna Inc.,
a rival using similar technology, whose stock was limping along. Ultimately, the investors decided BioNTech couldn’t justify the high value it was placing on its shares. 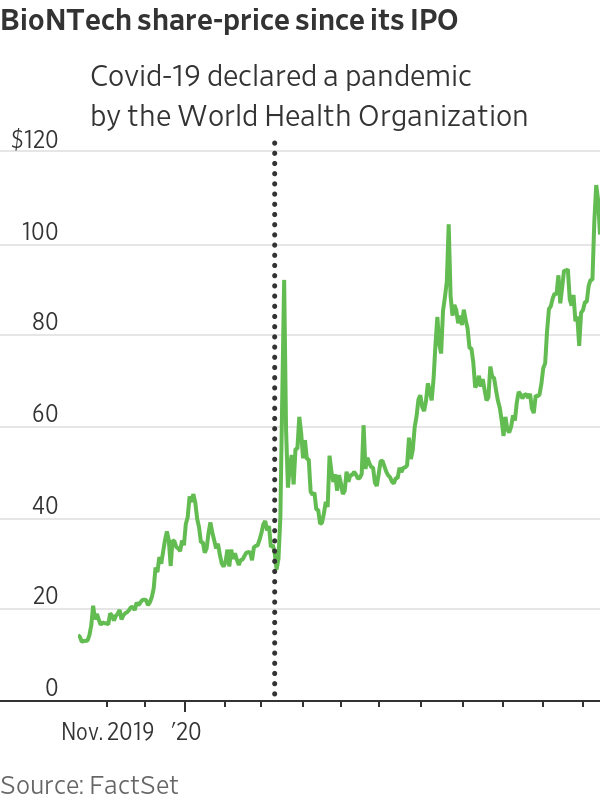 “They had a great pedigree, great investors and great scientific founders,” said Jeffrey Jay, co-founder of Great Point Partners, a Greenwich, Conn., health-care private-equity and hedge-fund firm that passed on the IPO. “But I like to see more data.”

After debating whether to scrap the offering, Dr. Sahin and BioNTech cut the price and the size of the deal, raising $150 million, just over half what they had hoped for. Even with that, shares landed with a thud on their first day of trading on Oct. 10, 2019, falling more than 5% to $14.24.

It hasn’t mattered. After the coronavirus hit, the company began focusing on developing a vaccine with
Pfizer Inc.,
its partner since 2018 on an influenza vaccine. On Monday, investors learned that early data showed their vaccine was more than 90% effective.

Now, BioNTech shares trade at $101.63, up 614% since the close on the first trading day last year. The company is worth more than $24 billion, a one-year shift in fortune that is the latest reminder of the feast-or-famine world of biotech.

“In biotech, when things start becoming real, shares can jump,” said Akash Tewari, an analyst at Wolfe Research, who added that BioNTech’s technology allowed it to quickly respond to the global pandemic.

BioNTech chose a tough period to go public. Around the same time, office-rental company WeWork was collapsing and a trade dispute between the U.S. and China was heating up, casting a pall over markets. Other biotech stocks were feeling pressure.

It didn’t help that Dr. Sahin is more of a scientist than a salesman. He publishes scientific papers and advises Ph.D. students even as he leads his company, and was reluctant to boast or make rosy predictions to investors. Some on his team sensed the soft-spoken executive was eager to resume his routine of bicycling to his lab near Roman ruins in the German city of Mainz.

Health experts say a vaccine is just one front in the battle against Covid-19. The other is effective treatments for those already sick with the disease. WSJ breaks down the three most promising types in development. Photo Illustration: Jacob Reynolds/WSJ.

Biotech specialists loved him, but he had a tougher time with those without a scientific background. Dr. Sahin wasn’t as persuasive as Stéphane Bancel, chief executive of Moderna, some said.

“Moderna had a classy and smooth Harvard MBA as CEO,” said Dr. Jay, the investor at Great Point. “BioNTech had a brilliant but low-key scientist who rode a bike to work…the contrast between the CEOs could not be more pronounced.”

When the Covid-19 crisis hit, BioNTech still didn’t have any approved drugs. But it had over 500 scientists focused on immunology, the study of the body’s immune system.

They were perfecting mRNA, the strategy of delivering genetic instructions that help the human body defend itself against viruses and other threats, like cancer. In the case of the coronavirus, cells are prompted to make a synthetic version of the spike protein jutting from the virus’s surface. The newly created spike protein triggers the immune system to learn to mount a defense against a real virus when it infects the body.

A March 17 announcement that it would work with Pfizer on a Covid-19 vaccine sent BioNTech shares past $90, but they soon fell below $40. BioNTech and Pfizer were behind Moderna in starting patient trials. But the two companies caught up and then passed Moderna, enrolling patients and conducting trials at a fast clip, receiving early results from their Phase 3 trials this week. Moderna’s results are expected shortly.

Now, some investors say, BioNTech’s share price already reflects the potential success of its vaccine, whose durability and safety haven’t been proved. Results are still awaited for elderly and immunocompromised patients. Enormous manufacturing and logistical challenges exist for a vaccine that needs to be delivered at extremely cold temperatures. Shots from rivals may be more effective. Some investors caution BioNTech and other shares could suffer if the pandemic is quelled and vaccines provide long-lasting immunity, reducing the need for additional shots.

For its part, BioNTech says while it is focused on the Covid-19 vaccine, it remains optimistic about its cancer research. “We look forward to getting to the other side of this crisis and we hope to be a part of those who make it possible,” the company said. “At the same time, the needs of cancer patients remain and we will use the experience we have gained in this effort to further develop our cancer programs.”

Is there a lesson to be learned from BioNTech’s ability to overcome early skepticism? Join the conversation below.

Write to Gregory Zuckerman at gregory.zuckerman@wsj.com