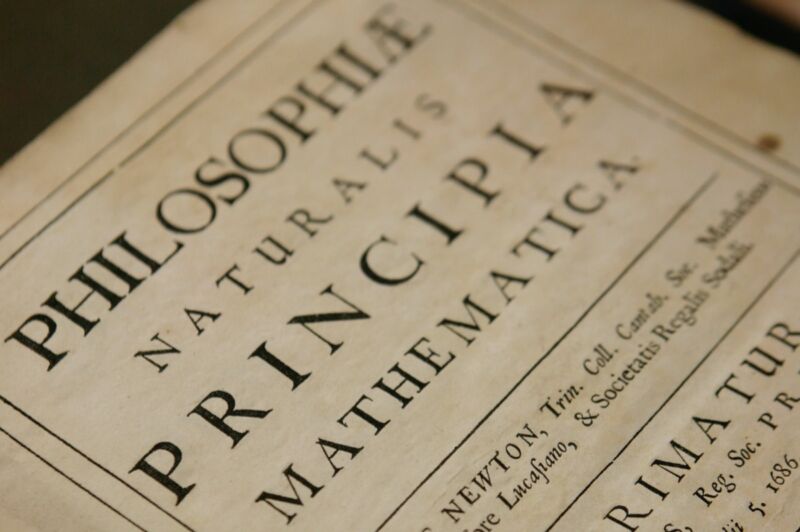 Enlarge / A copy of Isaac Newton’s Philosophiae Naturalis Principia Mathematica, one of the most important scientific works ever written, housed at the Science Museum Library and Archives in Swindon, England.
Daniel Berehulak/Getty Image

Isaac Newton’s Mathematical Principles of Natural Philosophy (known by its shortened Latin name, the Principia) is a massive, three-volume 17th-century treatise that is one of the most influential scientific books ever written. The famed 18th-century mathematician Joseph-Louis Lagrange described it as “the greatest production of a human mind.” Science historians have long debated just how many copies were produced during the book’s first print run.

Thanks to two intrepid researchers who spent more than a decade scouring records and archives across the globe, it now seems there could be more than twice as many surviving first editions as the long-accepted prior best estimates. They described the findings of their census in a new paper published in the journal Annals of Science.

As a young man, Newton attended Cambridge University, earning his undergraduate degree in science and math in 1665. His graduate studies were interrupted by the outbreak of the plague in Cambridge. Students and professors alike fled the city, and Newton returned home for the ensuing year, until the danger had passed. In that one year, he laid the groundwork for revolutionary ideas that would change the course of scientific history.

Over the next two decades, Newton expanded and codified his insights into three basic physical laws, and he set up numerous intricate experiments involving weights, pulleys, and pendulums, for instance, to test his mathematical predictions, all duly recorded in his notebooks. But it wasn’t until a 1684 visit from astronomer Edmund Halley (of Halley’s Comet fame) that he was inspired to refine and collect his calculations into a book that summed up everything he had discovered. Halley asked Newton to calculate the elliptical orbits of bodies in the Solar System and was so impressed with the results that he funded the publication of the book’s first edition himself.

Always a workaholic, Newton toiled like a man possessed to complete the manuscript over the course of three years, rarely venturing out, taking meals in his rooms, and often writing while standing up at his desk. It was not uncommon for him to leave a dinner party to get more wine and be found, hours later, slaving over an unfinished proof, both wine and friends forgotten.

The Principia caused quite a stir when it was finally published in July 1687, and justly so. (Newton’s final treatise, Opticks, appeared in 1704 and, according to the new paper, suffered the fate of most sequels. The English astronomer John Flamsteed declared that it “makes no noise in town,” unlike when the Principia was published.) A jubilant Halley distributed the bulk of the copies as gifts in Newton’s name. Lucky recipients included Samuel Pepys, Robert Boyle, Christiaan Huygens, the Royal Society, and King James II, to whom the book was dedicated.

A 1953 census of first-edition owners by Henry Macomber identified 187 copies. Based on this, he estimated the first run to have been quite small, on the order of 250 copies. That has been the broadly accepted estimate since, although other scholars proposed higher numbers, most notably science historian Owen Gingerich, who has proposed there could be between 600 and 750 first editions of the Principia.

Caltech’s Mordechai Feingold and his former student Andrej Svorenčík (now at the University of Mannheim in Germany)—co-authors of the new paper—also suspected that more first-edition copies might be lurking in archives and private collections around the world. Svorenčík was particularly struck by the absence in Macomber’s census of any copies from Eastern Europe, notably Slovakia, the Czech Republic, Poland, or Hungary. It was an understandable omission, according to Svorenčík, given that the Iron Curtain was in place at the time Macomber conducted his census, making tracing copies in those countries very difficult.

This suspicion was confirmed in summer 2008, when Svorenčík located several copies in Eastern Europe. That prompted a years-long search through library catalogs, as well as poring over auction records and contacting booksellers and rare book dealers in hopes of finding privately owned copies. The researchers completed much of that work within a few years, but lack of funding slowed down the final stage of the process, which involved personally inspecting each and every copy they found to determine its condition, binding, its provenance, and any scribbled marginalia.

All told, Feingold and Svorenčík identified 387 copies in 27 countries, which suggests a first print run of between 600 and 650 copies, roughly doubling the number in Macomber’s census. There may be as many as 750 first editions, on par with the second print run for the Principia and close to Gingerich’s estimate.

“We keep collecting data about the copies we have found, and we keep finding new copies,” Svorenčík told Ars, and he is confident they will find even more copies within the next few years.

A book nobody read?

One reason for the lower estimates was the assumption that there simply wasn’t much of a market for highly technical treatises involving advanced mathematics at the time the Principia was published. In their paper, Feingold and Svorenčík noted a 1672 exchange between Newton and the mathematician John Collins, in which Collins—clearly disillusioned with the marketplace—informed the scientist that “Latin booksellers [in London] are averse to ye Printing of Mathematicall Bookes.” And the Principia is a notoriously difficult book. One popular anecdote tells of a Cambridge student spotting Newton on campus and quipping, “There goes the man that writt a book that neither he nor any body else understands.”

Based on their analysis of ownership marks, notes scribbled in the margins, and letters and other documents, Feingold and Svorenčík concluded that the Principia was much more widely read than historians have previously assumed. “People seem to think that if a book lacks a notation, it is likely that no reading was involved, or very little of it,” Feingold told Ars. “The problem is that with a book like Newton’s, you have to sit with a stack of papers behind you in order to do the calculations necessary, and the margins are insufficient for such work.”

Feingold said that many people underestimate the mathematical knowledge of the educated class in the 17th and early 18th century. “We discovered, not only by looking at copies of the book, but also pursuing personal papers, that the book was actually read although there were different levels of comprehension,” he said. The philosopher John Locke, for instance, did not possess sufficient mathematical expertise when he was asked to write a review of the Principia and verified its accuracy with Christian Huygens before writing a glowing review focusing on the concepts. One can also assume there would be multiple readers for each copy, since books were typically shared in that period, according to Feingold, who believes the transmission of the book and its ideas spread far more quickly and broadly than previously assumed.

Those insights are a solid validation of the importance of studying the history of science, which has proven less appealing to various funding agencies in recent years, in favor of studies on contemporary policy or ethics. That’s one reason the researchers found it difficult at times to obtain funding for their census.

“We tried various avenues, but the result was always the same,” said Svorenčík. “We were told that the area of Newton studies had been worked to death and there’s not much else to find. Our work shows quite the opposite—that there are still new things to discover.”