Some U.S. cities have now run out of space in their ICUs, with many more on the brink of being overwhelmed as Covid hospitalizations keep skyrocketing to new national records on a daily basis. 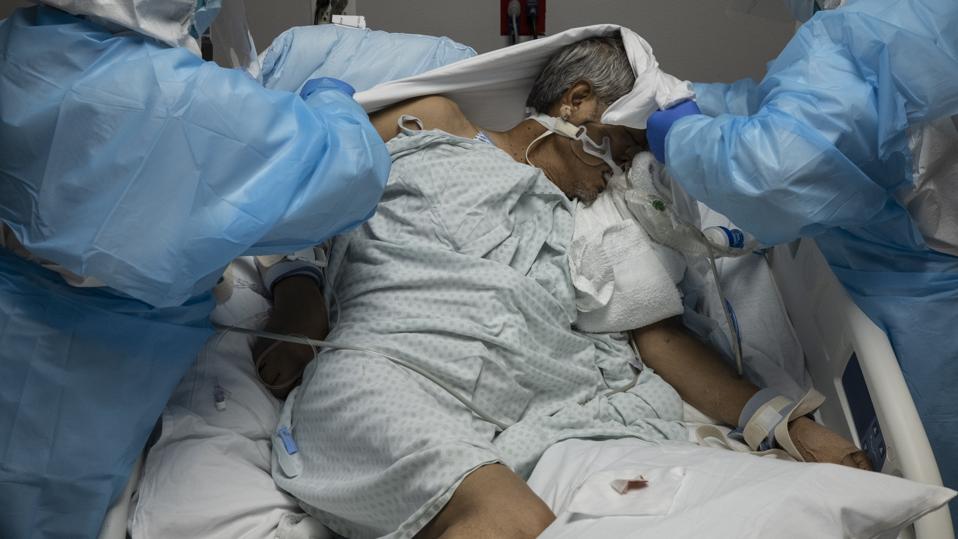 Medical staff members treat a patient suffering from Covid-19 in the ICU at the United Memorial … [+] Medical Center on Oct. 31, 2020 in Houston. (Photo by Go Nakamura/Getty Images)

Tulsa health officials announced Tuesday night that the city had run out of ICU beds.

St. Louis hospitals are so overwhelmed they’re reportedly having to turn away some patients.

In North Dakota, nurses are being allowed to continue working in certain cases even if they are Covid-positive, as Gov. Doug Burgum (R) has warned that the state’s healthcare system could soon be pushed beyond its limits.

A field hospital has been set up for surge capacity in Wisconsin, with Massachusetts planning to reopen one in December, and $10 million going toward converting a parking garage in Reno, Nevada, into a Covid unit.

Vineet Arora, a hospital expert at the University of Chicago, warns that Illinois is “dangerously close” to exceeding capacity, telling NPR that ICUs will run out of space by Thanksgiving.

Several other places around the country—like Kansas City and Rochester, New York—are also pushing the limits of their health care capacity. In South Dakota, a health official told NPR that it’s “a possibility” the state would follow North Dakota in taking the exceptional step of allowing nurses with Covid to work in Covid units at hospitals and nursing homes, provided they are asymptomatic. That’s a step Dr. Steffanie Strathdee, Associate Dean of Global Health at UC San Diego and author of “The Perfect Predator,” told Forbes earlier this week was “crazy” for North Dakota to take. Another looming problem could be a lack of nurses nationwide. During the spring surge, scores of health workers flocked to New York, which was the hardest-hit city in the country. But the crisis now is nationwide, meaning there could be competition for health workers in many places.

The U.S. has set a new record for hospitalizations for four-straight days, according to data from The COVID Tracking Project, and the trend seems to only be accelerating. Significantly adding to the problem is that new cases are also not only increasing, but constantly increasing at a faster pace, as well. The U.S. added more than 180,000 new cases on Friday, again setting a new record, which keeps getting broken day after day. Just 10 days earlier, the U.S. had never topped 94,000 cases in a single day. And before the fall surge, the daily case record stood at just over 75,000. Hospitalizations stood at 68,516 on Friday, according to The COVID Tracking Project. Deaths, which lag behind increases in cases and then hospitalizations, have been on a steady rise since mid-October. The U.S. is now averaging more than 1,000 Covid deaths a day.

El Paso, Texas, is dealing with an even more grim problem than hospitals reaching capacity—the city has run out of morgue space.

COVID-19 Hospitalizations Surge In Dakotas: ‘It’s Like We Opened Up A Spigot’ (NPR)