The rapid growth of wind and solar power comes with a well-known problem: They don’t work all the time. Energy storage is a solution investors should watch in 2021, even if it doesn’t yet lend itself to stock picking.

Governments around the world greatly raised their decarbonization ambitions this year. There is great uncertainty about how their promises will be delivered, but almost all scenarios involve massive building of solar and wind farms. As their share of power production grows, it will become crucial to bridge the times when the wind doesn’t blow and the sun doesn’t shine.

Building wind and solar together can reduce the gaps, while gas-fueled power plants can provide a nonrenewable backup. Also helpful are demand-side response agreements—when big power consumers promise to cut their usage during pinch points in exchange for lower prices.

Even with all these methods, though, it will be necessary to store excess electricity for use in lean times.

Lithium-ion batteries similar to those that power an electric vehicle are expected to provide most of the new storage capacity. Residential batteries can store power from rooftop solar panels, but it is so-called utility-scale stationary solutions for wind and solar farms that are really needed. They are often customized turnkey installations that provide between one to four hours of backup power. Battery packs cost nearly 90% less than in 2010 and will continue to get cheaper, according to researchers at BloombergNEF.

Shared chemistry with the automotive industry is a mixed blessing. Large-scale production will help drive down costs, but it can also create a supply crunch. Some Korean producers recently gave priority to vehicle batteries over stationary ones, pushing buyers to new suppliers in China. Expensive battery racks and site building costs also put utility-scale stationary solutions on a different trajectory to car batteries.

In addition to short-term storage, there is a need for longer-term solutions to cover days or even months. Pumped hydro—where excess power is used to pump water uphill into a reservoir, from where it can be released into a hydroelectric plant on demand—is a cost-efficient and clean option. It currently provides most utility-grade storage capacity globally, but finding new sites is a challenge.

Green hydrogen is another solution, involving “storing” renewable energy by using it to run electrolyzers that split water into hydrogen and oxygen. It is less efficient than other methods, but produces gas that is transportable and versatile. 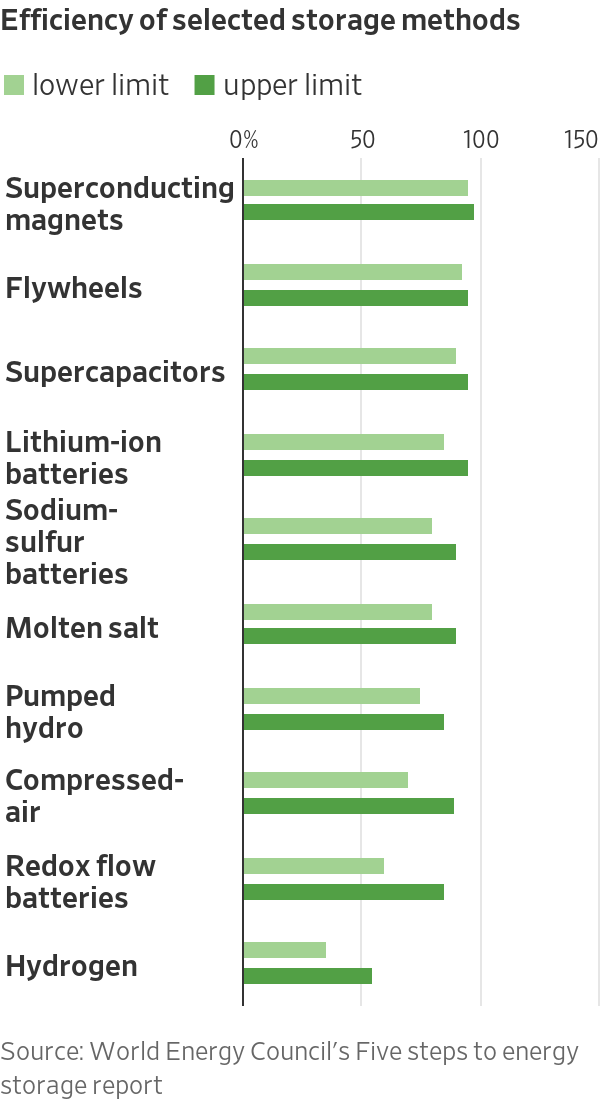 Safety concerns have arisen over batteries and hydrogen, but aren’t likely to trip them up: Fossil fuels and nuclear aren’t without risks. Other storage options include heating volcanic rock or molten salt, pressurizing air in containers, storing energy in flywheels and moving weights up into the air or down old mine shafts. Pilot projects have demonstrated their efficiency, but most aren’t yet commercialized.

One problem with the theme for investors is that for now it remains a side business for big battery companies such as
LG Chem
and
Panasonic.
The same goes for electrical equipment makers
General Electric,
ABB
and
Siemens,
which make power conversion systems for the storage facilities. Smaller, pure-play companies with promising technology face great uncertainty over how the market will develop.

Yet storage could soon become a more dominant feature of the green-energy landscape, and some companies’ profits. The renewables boom has weathered the pandemic and even picked up speed. It can’t be long before a technology crucial to their effective utilization takes off too.

Curt Schilling Asks To Be Taken Off 2022 Hall Of