Gold’s gains this week have highlighted something unusual about its rally this year: Rather than moving in the opposite direction to stocks, the haven metal and riskier equities recently have rallied and tumbled together.

Precious metals gold and silver are on course for their best week in around three months, as their prices climbed alongside riskier assets in the wake of the election.

Gold futures on the Comex division of the New York Mercantile Exchange on Friday were flat at $1,946.30 a troy ounce, but set for a weekly gain of 3.8%. That would mark the metal’s best week since late July if the gains hold until the end of the day. U.S. stocks, meanwhile, were wavering Friday, but through Thursday had notched their sharpest weekly rally since April. 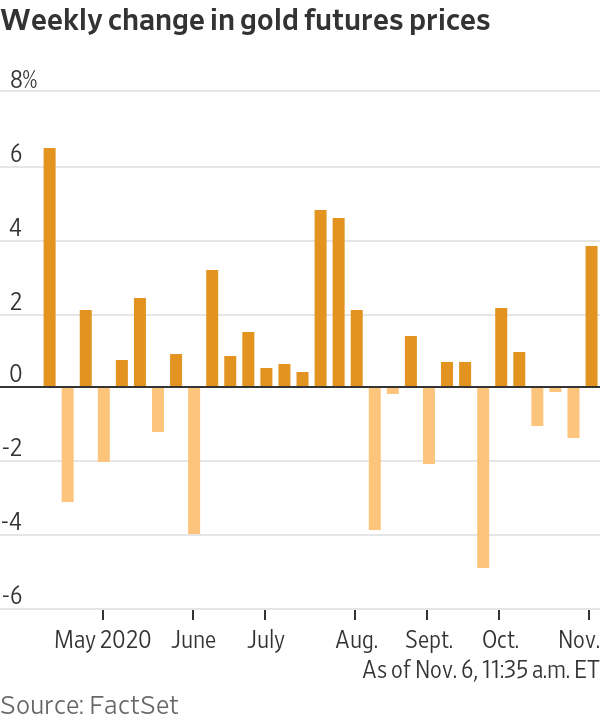 The unusual correlation has come as dovish central bank policy has supported stocks by propping up economic growth, while boosting gold by raising expectations of inflation, said Daniel Ghali, senior commodities strategist at TD Securities. The Federal Reserve on Thursday maintained its pledge for an extended period of low interest rates.

Silver, gold’s more volatile precious-metal cousin—which tends to overshoot when gold rises and undershoot when it falls—has also risen this week. Silver futures are up 7.8% this week at $25.49 an ounce. That would be its best week since early August.

A weaker dollar was driving the gains, as well as investors’ bets that interest rates will stay low for the foreseeable future. Fears that inflation could be driven higher by stimulus measures have also given a boost.

The
ICE
U.S. Dollar Index, which measures the greenback against a basket of currencies, has declined about 1.9% this week, on track for its worst week since March.

Gold and other precious metals are bought and sold in dollars, so a weaker greenback makes those metals more affordable to investors holding other currencies, which in turn can boost demand. 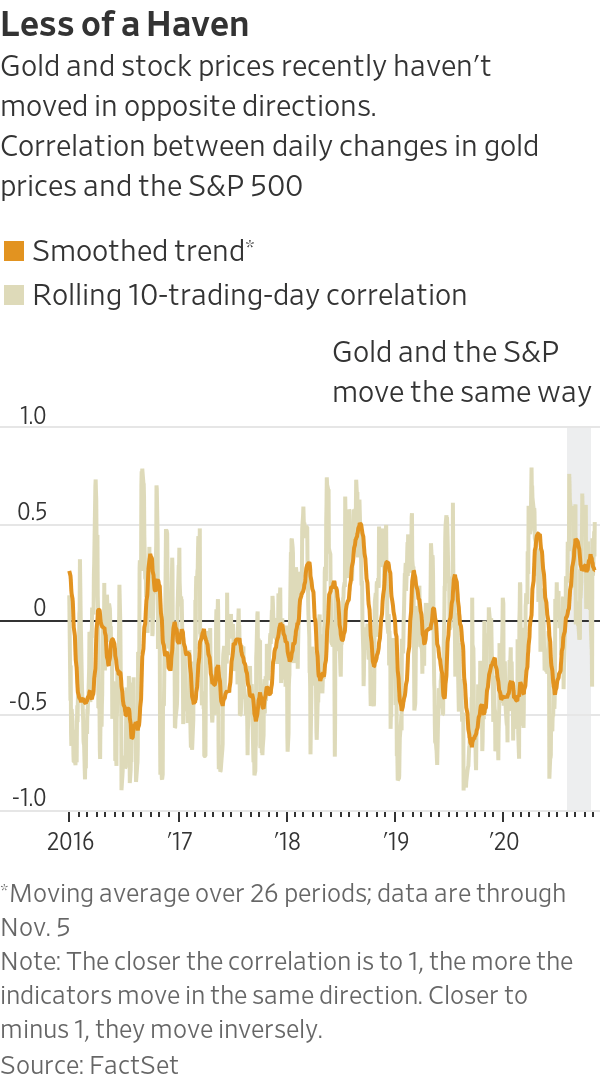 Buying gold is typically seen as a way to hedge against the risk of higher inflation, thanks to its 6,000-year history as a store of value. Rising inflation also gnaws away at the return investors get on bonds, and so can make gold appear a more attractive investment.

At the same time, the rapid rally seen in stock markets despite the continued uncertainty presented by the coronavirus has meant some investors weren’t prepared to let go of their gold holdings just yet, said Altaf Kassam, European head of investment strategy and research at State Street Global Advisors.

“Investors are not jumping into this rally with both feet and that speaks to the fact that people are still happy to own gold and play both sides,” he said. “We are seeing this weird balance of risk aversion with risk-loving sentiment.”

The weaker dollar has also helped boost assets that rarely rally alongside gold. Bitcoin surged more than 13% against the dollar this week and is trading near its highest value in three years, according to CoinDesk.

What bitcoin, gold and silver share is that they all benefit in an environment of low rates, said Chris Weston, head of research at derivatives trading company Pepperstone Group Limited.

“The weaker dollar is where we’re seeing outperformance coming through in these products,” said Mr. Weston. “None of these markets have yield and therefore in a perverse way, when central banks are trying to drive down yield, then the relative attractiveness of the yield-less assets are reinforced.”

—Caitlin Ostroff and Pat Minczeski contributed to this article.

Write to Will Horner at William.Horner@wsj.com