International markets advanced, tracking a U.S. rally, as investors positioned for a potentially divided U.S. government, with a Democratic president and a Republican Senate.

U.S. stock futures rose nearly 1%, suggesting American markets could gain later on Thursday, after a session in which the broad S&P 500 index logged its biggest one-day point and percentage increase since June. Likewise, government bonds continued to rally, pushing yields on the 10-year Treasury down 0.032 percentage point to 0.735%. 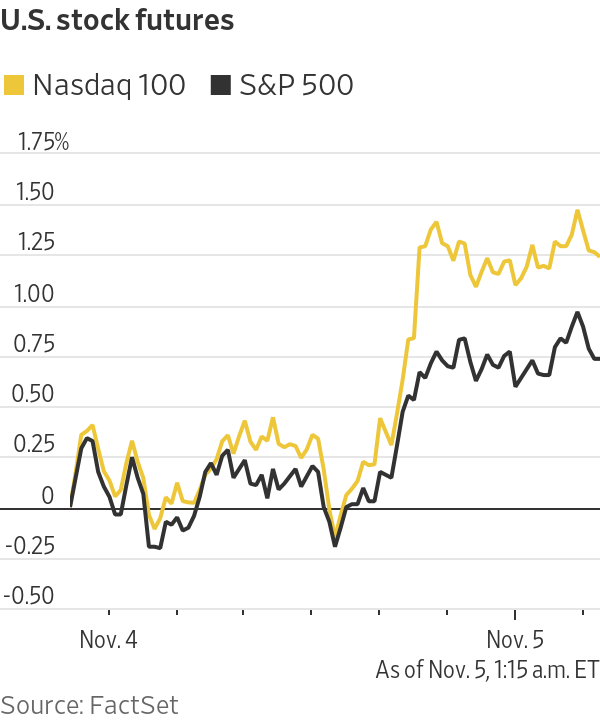 As in the U.S., some of the biggest winners were technology giants—already market darlings and more attractive than companies in other sectors, given a backdrop of subdued economic growth and low yields.

Democratic candidate Joe Biden racked up wins in Michigan and Wisconsin, putting him closer to the presidency. President Trump’s team said it hoped to flip Arizona back to the Republican column and pursued legal actions to try to blunt the Mr. Biden’s advance.

Ken Peng, head of Asia investment strategy at Citi Private Bank, said the latest vote counts pointed to reduced likelihood of stimulus funded by large deficits. That would be more likely after a Democratic sweep, in which the party gained the presidency and both houses of Congress.

“A Biden presidency and split Congress is actually the least traumatic [outcome] for the market,” he said. “The stimulus is likely to be smaller than a Democratic-sweep situation, so that reduces inflation expectations, hence lower and less steepening yields.” A steeper yield curve means a bigger gap in yields between longer and shorter-dated bonds.

“Biden’s foreign and trade policies are expected to be milder than Trump’s,” he added. “That’s actually a net positive for global growth.”

Chinese technology companies could also benefit from a less antagonistic relationship between the leaders of the U.S. and China, the world’s two largest economies.