Investors ended one of Wall Street’s wildest years on record by piling into everything from bitcoin to emerging markets, raising expectations that a powerful economic comeback will fuel even more gains.

The vast climb known as the “everything rally” accelerated late in the year, sending the S&P 500 to its 33rd record of 2020 last week. Following an early-year collapse, the broad U.S. equity gauge, global stocks and an index of raw materials each rose at least 35% from the end of March through the end of the year, only the third time in figures going back five decades that all of those investments have climbed so much in such a short time, according to Dow Jones Market Data. Both of the previous nine-month periods were in 2009 exiting the financial crisis.

The S&P 500 ended the year up 68% from its March lows, after losing more than one-third of its value in about a month. Government bond yields, which fall as prices rise, remain near all-time lows. Meanwhile, corporate bond yields also dropped after early-year turmoil. That means many bond investors ended the year with gains. And U.S. crude-oil prices are back near $50 a barrel after briefly dropping below $0 for the first time ever in April.

After the eye-popping rise during a global pandemic highlighted confidence that central banks and governments would prop up the world economy, many investors now expect the delivery of vaccines to buoy markets.

Gauges of sentiment from organizations including the American Association of Individual Investors show bearishness at multiyear lows. Meanwhile, tens of billions of dollars have recently plowed into exchange-traded and mutual funds that track stocks. Both of those trends have preceded past pullbacks, signaling excessive optimism to some cautious investors. Some are drawing parallels to the outsize gains late in 2017 and early 2018, before trade tensions and higher interest rates roiled markets.

Will the historic rally in financial markets continue in 2021? Why or why not? Join the conversation below.

“Investors can’t get enough risk—whatever it is,” said

Emily Roland,
co-chief investment strategist at John Hancock Investment Management. “Momentum is a powerful force, and we don’t want to fight it.”

The firm is maintaining its investment in U.S. stocks in line with the benchmark it tracks and favoring the economically sensitive industrial sector. At the same time, it is avoiding increasing its stockholdings and sticking with a neutral position in bonds. 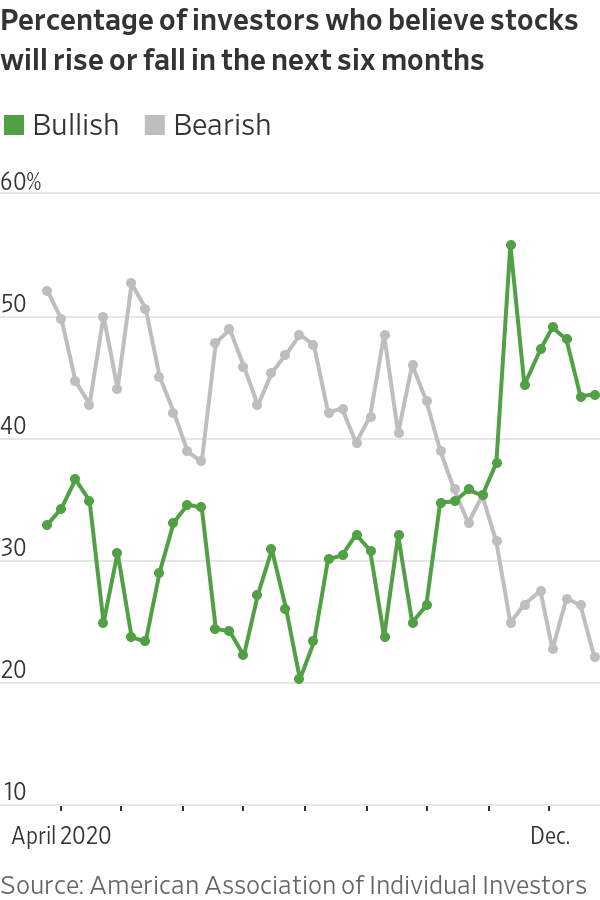 Analysts still see potential speed bumps on the horizon, including a recent surge in coronavirus cases and a pair of Georgia runoff races this week that will determine which party controls the Senate under President-elect
Joe Biden.

Yet, many observers still expect ultralow interest rates to continue supporting bonds while pushing investors to reach for higher-yielding assets. With many U.S. technology stocks at records, many investors are buying shares of economically sensitive companies, commodities and shares of companies in emerging markets, all of which remain below their peaks.

Their gains highlight optimism that the economy will boom in the second half of 2021, even if the next few months offer hurdles to the recovery. 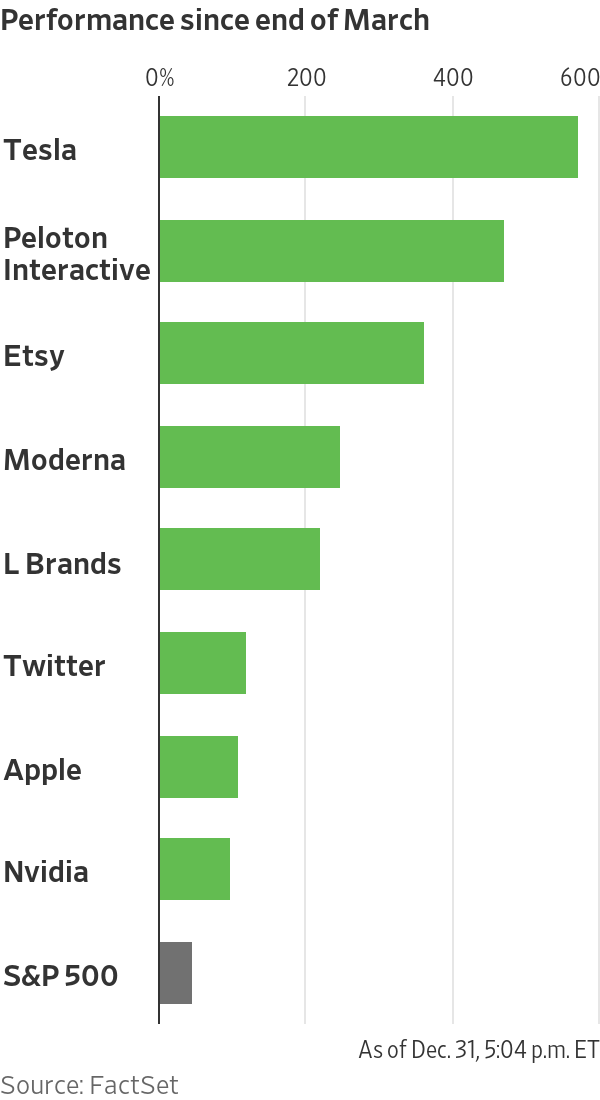 “We’re really encouraging our clients to look beyond” anticipated turbulence in the first half of 2021, said

Meghan Shue,
head of investment strategy at Wilmington Trust. The firm increased its investments in U.S. stocks and emerging markets in the past few months.

Companies including
Apple Inc.
that benefited from the stay-at-home trend ended the year with astonishing market values, while everything from electric-auto maker
Tesla Inc.
to copper producer
Freeport-McMoRan Inc.
also posted outsize returns.

That underscores the increasing breadth of the rally, but lofty projections for both the tech sector and more growth-sensitive stocks remain a concern for some money managers.

“The expectations about certain segments are overcooked,” said

Lee Baker,
president of Apex Financial Services in Atlanta. He is recommending clients favor banks and cheaper stocks tied to travel in the new year.

Fund managers surveyed by
Bank of America
last month said they held less cash than the benchmarks they track for the first time since May 2013, another indication that investors are moving money into riskier parts of the market. Many of those surveyed have increased their investments in areas such as emerging markets lately.

“Those markets have a lot more recovery potential,” said

Michael Kelly,
global head of multiasset at PineBridge Investments. He has been favoring emerging markets as well as French and Spanish stocks in recent months, believing that an uptick in global growth, aided by government stimulus, will help them outperform. 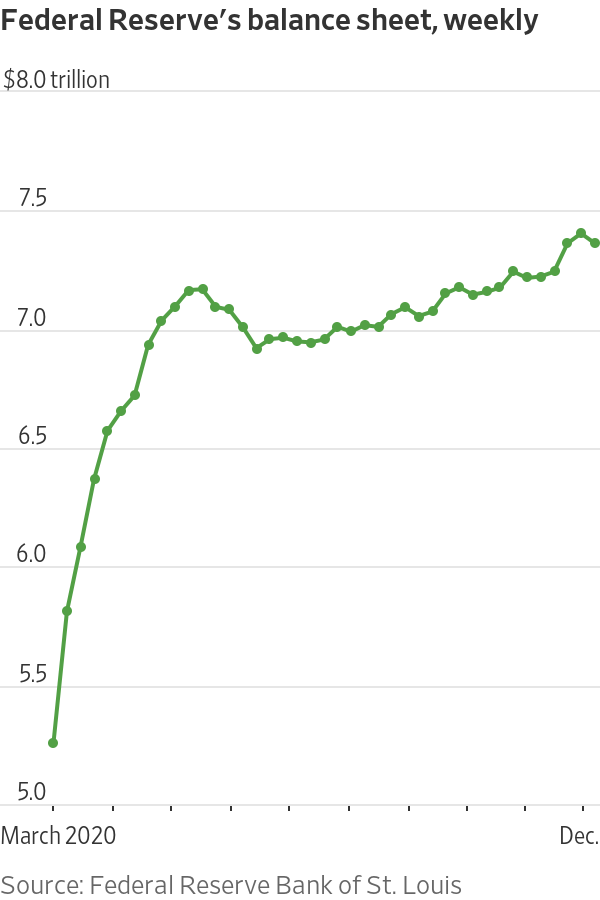 Investors have been particularly encouraged by recent economic data showing the Chinese economy motoring ahead after the country largely contained the coronavirus, a boon for other emerging markets and producers of raw materials. Analysts now hope the U.S. and Europe will catch up.

Even with the pandemic worsening in those regions, economic data have largely remained steady, with the rollout of vaccines giving consumers and businesses more confidence.

That also is helping the big rebound in stocks tied to pandemic-hit sectors including travel and leisure, but some investors are wary that those companies won’t meet raised expectations as the recovery unfolds.

“You have to be careful on some of these reopening trades that the sentiment is not already priced in,” said

Victoria Fernandez,
chief market strategist at Crossmark Global Investments. She is favoring faster-growing companies tied to technology infrastructure and waiting for a pullback to add to her positions.

Media gushes over 'historic' Harris as Biden struggles through another