China’s voracious appetite for imported meat is starting to wane, as domestic pork prices fall and consumer worries grow about the coronavirus lingering on food.

For more than two years, Chinese farmers have battled outbreaks of African swine fever, a highly contagious hemorrhagic disease that reduced the country’s domestic herds in 2019 by as much as 41%—or more than 100 million pigs—causing pork prices to more than double. The swine fever virus isn’t harmful to humans, but is almost always deadly in pigs and there is no vaccine or cure for it.

Pork prices have been volatile this year, but they are trending lower. Wholesale prices have fallen 18% since the start of September to the equivalent of about $2.75 a pound, according to Wind, a Chinese financial data provider. Pork now costs slightly less than it did a year ago.

Swine fever outbreaks are still occurring, but the country has moved to repopulate its pig farms, cumulatively adding 60 million hogs since the start of 2020, according to China’s National Bureau of Statistics. 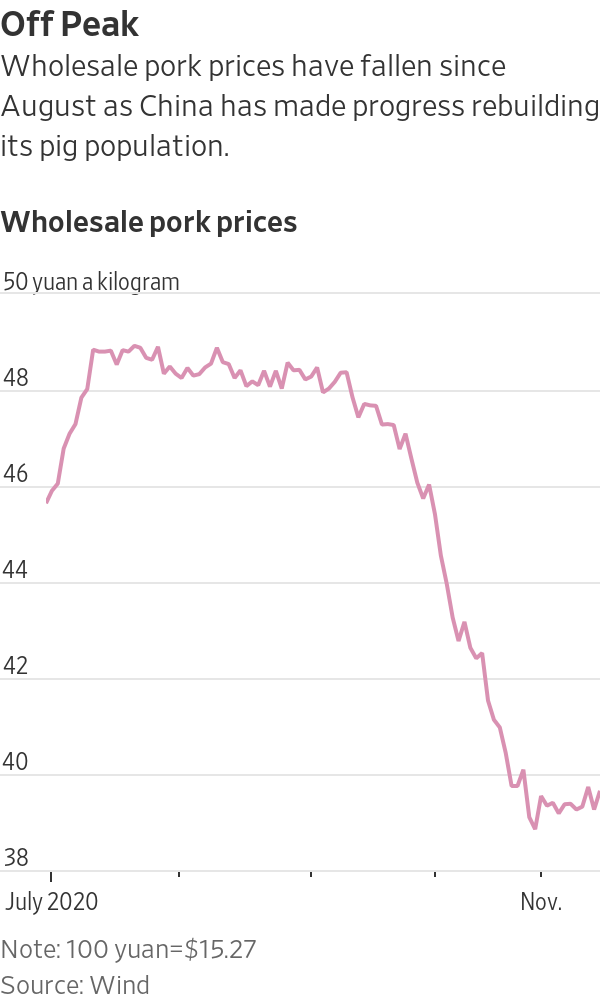 Pigs have been flown in from Europe to boost herds, new farms have been built and large commercial operations are increasing pork production. Pork prices should continue to fall next year, says Feng Yonghui, chief analyst at pig-industry portal Soozhu.com, as the rebuilding effort continues and farmers send more pigs to slaughter.

China’s hog population currently stands at 370 million, down from roughly 430 million pigs before African swine fever was first detected in the country in August 2018.

The country is the world’s largest producer and consumer of pork and has increased imports of meat—including beef and lamb—to help cover the domestic shortfall. In the first 10 months of 2020, China’s meat imports were valued at $25.4 billion, up 75% from a year earlier, one of the global bright spots in an industry that has seen demand drop due to restaurant closures around the world.

The growth has recently slowed, with October import volumes at levels last seen in February, according to data from China’s General Administration of Customs.

One reason is Covid-19. Since June, when an outbreak of the disease emerged at a market for seafood, meat and vegetables in Beijing, Chinese authorities have identified imports of refrigerated and frozen foods as potential carriers of the coronavirus. 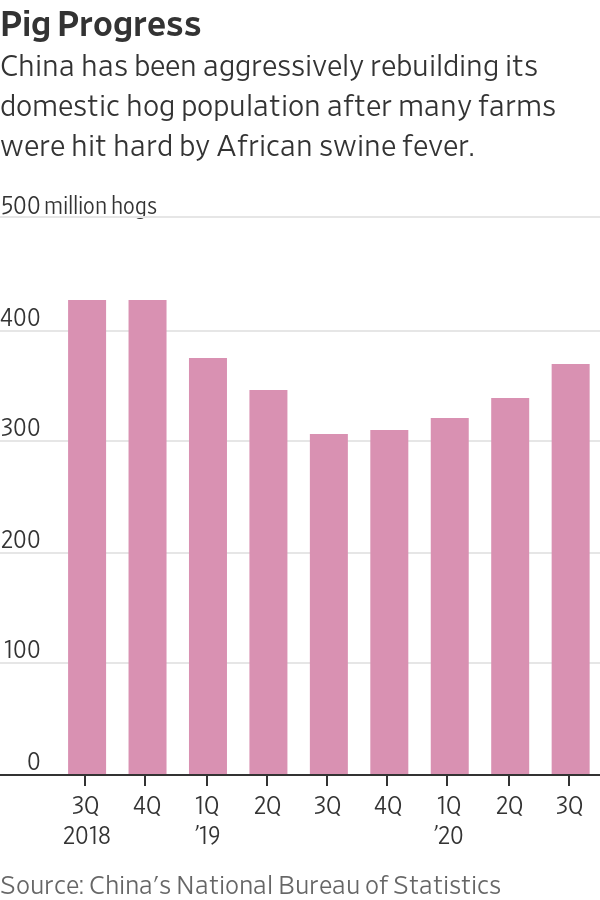 That led to large-scale inspections and tests of food shipments into the country and requirements for overseas producers and importers to certify that their food products and plants don’t carry the coronavirus. Some meat production facilities had to halt exports to China after workers at their processing plants contracted Covid-19.

In September, China’s national customs agency said it had tested at least half a million samples taken from packages of so-called cold-chain foods. Concerns about imported foods carrying the virus have also prompted some Chinese consumers to buy more locally grown meat and produce, according to reports in domestic media.

Chenjun Pan, a senior industry analyst at Rabobank, said companies risk losing entire shipments if the coronavirus is found on any of their food, which deters importers. It would be “a very big loss for them,” she said.

As pork prices fall in China, consumers could end up eating more of it. Last year, pork consumption per capita in the country dropped to 72 pounds from 88 pounds in 2018, according to a Rabobank report. The company expects consumption to fall further to 62 pounds per person this year due to the average higher cost of pork in 2020.

Now, expectations are for more Chinese citizens to switch back to pork from other proteins like chicken and beef, said Darin Friedrichs, senior Asia commodity analyst at StoneX in Shanghai.

“Ultimately pork stays the central protein, which is why China wants to be 95% self-sufficient in production of it,” he said.

—Zhou Wei contributed to this article.

Write to Lucy Craymer at Lucy.Craymer@wsj.com