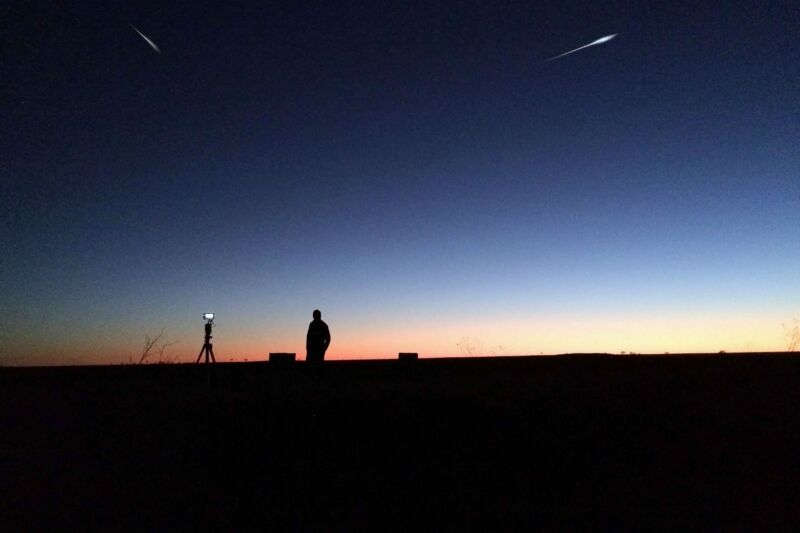 The Ramgarh Crater in northern India was formed millions of years ago when a large meteorite crashed into Earth. But it wasn’t until the 19th century that scientists began to believe it was an impact basin. From the ground, it’s difficult to assess that it’s a crater. The thing is just too big to take in all at once. Yet the cluster of temples in the center of Ramgarh suggests ancient cultures recognized there was something special about the place, even if they had no way of knowing it was formed by a rock from outer space. Examining the effects of meteorites is always scientific, but it’s often spiritual, too, and it’s the tension between those two disciplines that drives Fireball.

Written and directed by Werner Herzog, the documentary aims to make sense of extraterrestrial geology, to trace all the ways meteorites have made impressions far beyond the edges of any individual crater. Herzog and his co-director, Cambridge University volcanologist Clive Oppenheimer, interview boffins geeking out over meteorites in their lab, of course, but also a jazz musician prowling for micrometeorites on the rooftops of Oslo, an indigenous painter chronicling otherworldly stories in the outback of Australia, and a Jesuit priest keeping vigil over a meteorite collection in a secluded European observatory. “Every stone has its own separate story,” Herzog says.

Oppenheimer traces the genesis of Fireball, which drops Friday on Apple TV+, to a visit to Korean Polar Research Institute, which sponsors an annual Antarctic expedition to collect meteorites. When Oppenheimer saw the vast collection of meteorites stored at the institute, he knew there was a bigger story to tell. “I was struck by the significance these stones have for understanding the earliest period of the Solar System and the building blocks of life on Earth,” he says. “I just felt instantly that meteorites are a phenomenon that speak to us on both a scientific and a metaphysical level.” Oppenheimer had previously collaborated with Herzog on Into the Inferno, and when he pitched the German auteur on a movie about meteorites he didn’t have to wait long for a decision. “It was five seconds and it was clear we were going to do it,” Herzog says.

Meteorites are the perfect topic for a filmmaker like Herzog. His best work has always featured subjects that occupy liminal spaces where two worlds collide—East and West, the human and the supernatural, the digital and the analog. Fireball falls squarely in this tradition. Meteorites are both a local phenomenon that has shaped communities and an existential threat faced by the entire planet. They’re messengers from the deep past heralded as portents and inert pieces of matter that carry the building blocks of life. They’re the source of both scientific and spiritual wonder, and in this respect, meteorites have a lot in common with the humans who study them.

Even though Fireball is ostensibly a science documentary, it doesn’t feel like one. “Documentaries about science are always very predictable, and many of them are too didactic,” Herzog says. “We said we shall never be didactic, we will give insights of a deeper nature than just science.”

While Herzog and Oppenheimer drop plenty of mind-bending facts throughout the doc, they also know when some hand-waving will suffice. (Do you really want to know the mathematical basis of a quasicrystal? I didn’t think so.) Fans of Herzog will also relish his moody and often humorous voice-overs, which transform a Mexican port town into “a beach resort so godforsaken you want to cry” and stray dogs sunning themselves in a crater into beasts too dumb to reckon with the cosmic implications of their tanning bed.

More than 100 tons of space rock falls to Earth every day. Most of these meteorites arrive as microscopic particles of cosmic dust, but every so often one comes along that’s big enough to shape the destiny of an individual, a community, or the entire planet. This is what Herzog meant when he said each of these stones has a story. It feels natural to attribute meaning to a natural event caused by random fluctuations in an unfeeling universe. Sometimes the story starts with a meteorite. Other times, it’s how the story ends.

North Korea toughens rules of entry to sea to fight