Here’s what we’re watching ahead of the opening bell on Wednesday.

—U.S. stock futures are slipping as investors react to early results from Georgia’s runoff elections. Nasdaq-100 futures are taking the biggest hit, off 1.5% on expectations that a Democratic-controlled Senate would lead to tighter regulations on tech giants.

Government bonds sold off too, pushing the yield on 10-year Treasurys above 1% for the first time since March. Read our full market wrap here.

—The Federal Reserve will release minutes of its December policy meeting at 2 p.m. ET. The central bank said at the time that large-scale purchases of government debt and mortgage securities would continue “until substantial further progress has been made” toward broader employment and inflation goals.

—The Energy Information Administration will report how much oil was in storage in the U.S. last week at 10:30 a.m. Crude supplies are expected to have fallen. Benchmark U.S. crude futures are back above $50 a barrel after breaching that level on Tuesday for the first time since last February on Saudi Arabia’s decision to cut extra barrels of output.

—
Costco Wholesale
is due to report December sales results at 4:15 p.m. The warehouse chain enjoyed a bounce in sales to homebound Americans last year.

—Tech stocks including
Facebook,
Google-owner
Alphabet
and
Netflix
are all down in premarket trading. President-elect
Joe Biden

has promised greater scrutiny of tech giants that have powered the stock-market rally in recent years.

—
UnitedHealth
slipped 1.3% after agreeing to buy health care-technology firm
Change Healthcare
for about $7.84 billion in cash.

—
Tesla
shares rose 3% ahead of the bell in New York. Analysts at
Morgan Stanley
bumped up their price target for the stock to $810, from $540, after the electric carmaker reported a record number of vehicle deliveries last year. Tesla shares closed at $735.11 Tuesday.

—Shares of
Bank of America,
Citigroup,
JPMorgan
Chase and other major lenders are also on the rise. A Democratic-controlled Washington would boost the possibility of more fiscal stimulus, says

—Cybersecurity firm
CrowdStrike Holdings
fell more than 3% ahead of the bell, reversing some of Tuesday’s gains.

—
Freeport-McMoRan
shares rose 4.4%, suggesting the mining stock will extend a rally dating back to March. Freeport has benefited from surging copper prices.

One sign of improving investor sentiment: Expectations for annual inflation over the next decade climbed above 2% this week for the first time since 2018. That rate, derived from the difference between nominal and inflation-protected Treasury yields, had fallen as low as 0.5% in March. 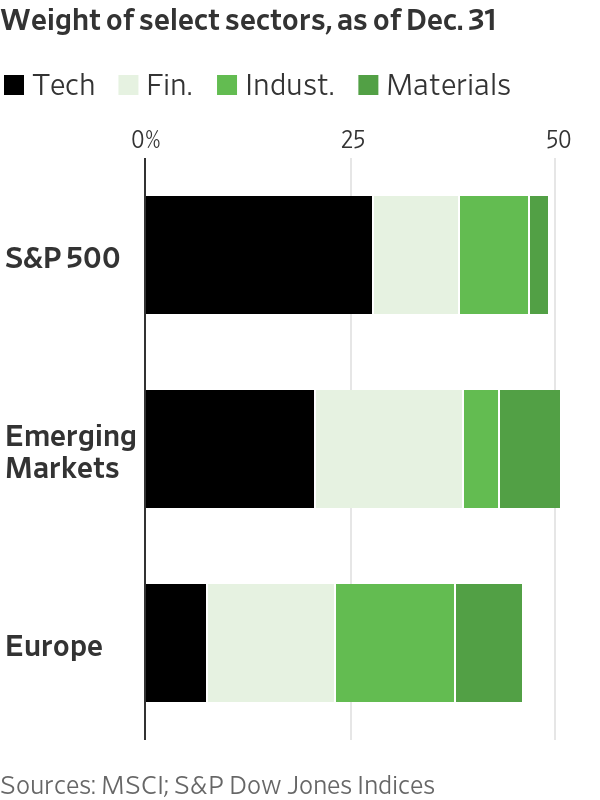 Investors betting on a continued economic rebound are increasingly looking beyond U.S. stocks. Investing in U.S. stocks, they say, has increasingly become a concentrated bet on the technology sector, which contributed more than half of the S&P 500’s 18% total return last year.

Trump Issues New Ban on Alipay and Other Chinese Apps

Forget Uber, Zoom Might Be the Long-Term Threat to Car Sales

Kawhi Leonard’s Playmaking Is Reaching A New Level With Clippers