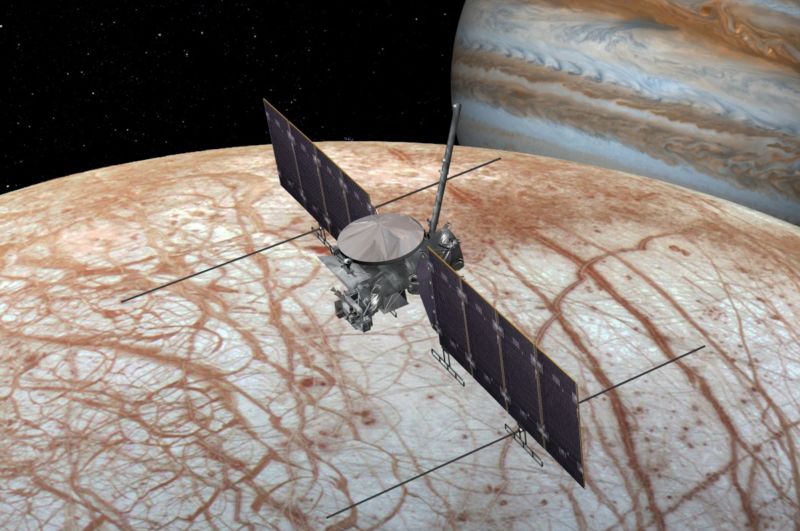 Enlarge / An early design of the Europa Clipper spacecraft.
NASA

If everything goes according to plan, 2024 will see NASA launch the Europa Clipper program, which is designed to make multiple passes to study the water-rich moon’s potential to host life. The big challenge the mission will face is that any liquid water is likely to be far below Europa’s icy surface. At best, we can hope for some indication of what’s going on based on the composition of any material trapped in the ice itself or the possible presence of geysers that release bits of its interior to space.

That makes understanding the sorts of remote sensing that might be possible critical. And, to that end, some NASA scientists have looked into how ice behaves in Jupiter’s high-radiation environment. The scientists found out that Europa’s ice probably glows in the dark, and that glow may carry some information about what’s present in the ice.

Let there be light

The mechanism that can make Europa’s ice glow is a bit like what’s used by a black light poster. There, light outside of the visible wavelengths excites molecules that then release the energy at wavelengths we can see. In the case of Europa, the excitation energy doesn’t come from light, but that energy is indirectly powered by Jupiter’s magnetic fields. These fields pick up charged particles liberated by the planet itself (or one of its moons) and accelerate them. (Much of the material in Jupiter’s high-radiation areas was expelled into space by volcanoes on its moon Io.)

Some of these charged particles will strike Jupiter’s moons and deposit energy in the material at their surface. Some of that energy will undoubtedly come out as photons; the question is what energy the photons have, which will determine how readily we can detect them.

So, Murthy Gudipati and Bryana Henderson of NASA got together with Fred Bateman at the National Institute of Standards and Technology, and they did what anyone else with access to the right toys would do: they froze ice down to 100 Kelvin and bombarded it with electrons. And then they froze various combinations of salts in it and tried to see if that changed anything.

Using the water-only sample, Gudipati et al. determined that ice will glow in the dark at visible wavelengths under these conditions. While the peak is on the border of blue and green wavelengths, it’s a very broad one with a wide shoulder on the redder end of the spectrum. That means the glow from the samples looks fairly white-ish. The light dies out as soon as the radiation is stopped, and it grows in intensity if the electron radiation is ramped up to higher energies.

Comparing that to salts mostly showed that salts interfered with this glow. But salts didn’t interfere with all parts of it evenly. For example, sodium sulfate causes the bluer end of the spectrum to drop out while enhancing the red end slightly. Sodium chloride, in contrast, causes the whole spectrum to drop evenly. Sodium carbonate pretty much eliminates all emissions except those near the infrared. The big exception was magnesium sulfate, which seemed to enhance most of the spectrum, especially in the green-to-red region.

These differences between the salt content suggests that it might be possible to infer things about the composition of Europa’s ice (and thus the ocean beneath it) by reading its glow.

As a first step, researchers look at some of the images made by Earth-based telescopes that include the unlit side of Europa. Unfortunately, these images are dominated by the glow of radiation slamming into the tenuous gasses that are held weakly by Europa’s gravity. That’s a problem for imaging from Earth, but it turns out that the radiation won’t be a problem for the Europa Clipper, which will be making some orbital passes that take it between the source of this radiation and the moon’s surface.

So, the three researchers got all the information available on the instruments that the Europa Clipper will be carrying, and they tried to estimate whether the Clipper could pick up the glow-in-the-dark ices at the surface.

They decided that the Wide Angle Camera was the best bet. While it has relatively poor resolution per pixel (meaning the camera will struggle to associate specific compositions to landscape features), the trade-off is that the Clipper will be able to gather more light in each pixel. The researchers calculate how much light an area on Europa should generate given the typical power of radiation in the environment and how many of those photons would reach the camera. This works out to be in the area of 100,000 photons a second for pure water ice, which is about 100 times higher than the photons produced by radiation striking material in Europa’s orbit.

This is when we introduce a whole bunch of caveats. For one, some of the filters on the camera cut mean that some wavelengths that could otherwise help determine composition will end up lumped together in the same data bin. The other thing is that the ice in these test cases is made from unusually pure water, with just a single salt in it. The real-world Europa will likely have more than one salt present, and it is likely to have a complicated mix of organic materials collectively called tholins present. So, it’s probably worth looking into whether these affect the emissions in any way.

The final thing, which the authors themselves mention, is that electrons are hardly the only things bombarding the ice. As mentioned above, a lot of the material being shifted around by Jupiter’s magnetic field includes sulfur, oxygen, and hydrogen ions. Those might impact the ice in distinct ways, which people might also want to explore.

Still, the mission isn’t even expected to launch for a few years, so there’s plenty of time to start sorting this out. And, since it could be difficult to image anything else when the camera is just 50 km above the dark side of Europa, there’s no obvious harm in gathering the data we want to analyze, even if we don’t quite have what it might tell us fully sorted out yet.