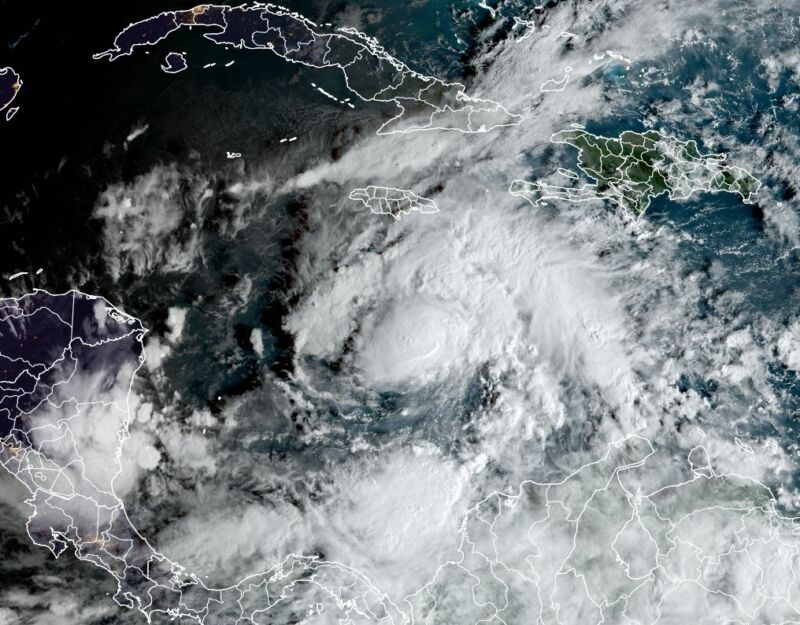 This is the 28th named storm of the 2020 Atlantic hurricane season, and ties 2005 for the most tropical storms and hurricanes to be recorded in a single season. The Atlantic “basin” covers the Atlantic ocean north of the equator, as well as the Gulf of Mexico and Caribbean Sea.

Eta poses a distinct threat to land. Although the storm’s track remains ultimately uncertain, Eta should move somewhat due west for the next few days, likely strengthening to become a hurricane before landfall in Nicaragua by Tuesday evening or Wednesday. As it will be a slow-moving, meandering storm, Eta will produce a prodigious amount of rainfall, with up to 30 inches possible over parts of Nicaragua and Honduras. This will lead to significant flooding, with landslides and swollen rivers.

After this time it is unclear whether Eta will dissipate over Central America, or get drawn north or northeast back into the Caribbean Sea. Under this scenario, Eta might perhaps threaten Cuba or Florida in about one week’s time. In this bizarre, seemingly unending 2020 hurricane season anything seems possible.

The last named storm of the 2005 season was named Zeta, which is the sixth letter of the Greek alphabet, because only 27 named storms were identified during the season. A 28th tropical storm was characterized after the season, in a subsequent analysis of data.

So far, this season has lacked the extremely high-end impact storms like 2005 produced. That year saw Hurricane Katrina, which is the costliest Atlantic hurricane of all time, with estimated damages of $125 billion. Wilma (7th costliest) and Rita (12th) also formed during the 2005 season. By contrast, this year’s costliest storm has been Hurricane Laura, with an estimated $14 billion in damages.

Another measure of overall activity is Accumulated Cyclone Energy, which factors in the longevity and overall intensity of storms. The years 1933 and 2005 rank atop this list over the last 150 years, with ACE values above 250. The 2020 season has a value of about 140, nearly 40 percent above a “normal” Atlantic season.

The 2020 season has made up for this with concentrated misery—five named storms made landfall in Louisiana this year. This included the aforementioned Laura, followed by another hurricane, Delta, making landfall about 20 km away only three weeks later.

So is this it? The official end of the Atlantic hurricane season comes on Nov. 30. However, the 2020 season kept on churning out storms, with four more forming after November 1, including Zeta, which formed three days after Christmas in the open Atlantic and persisted through January 6. The next named storm of this year, should it form, would be named Theta as forecasters get deeper into the Greek alphabet.

Climate scientists will be studying this season for some time. Generally, scientists think that although there may not necessarily be more tropical storms and hurricanes in a warmer world, the storms that do form will be more intense, and produce more rainfall. They also expect that with warmer seas, hurricane seasons may expand beyond their traditional start and end dates.