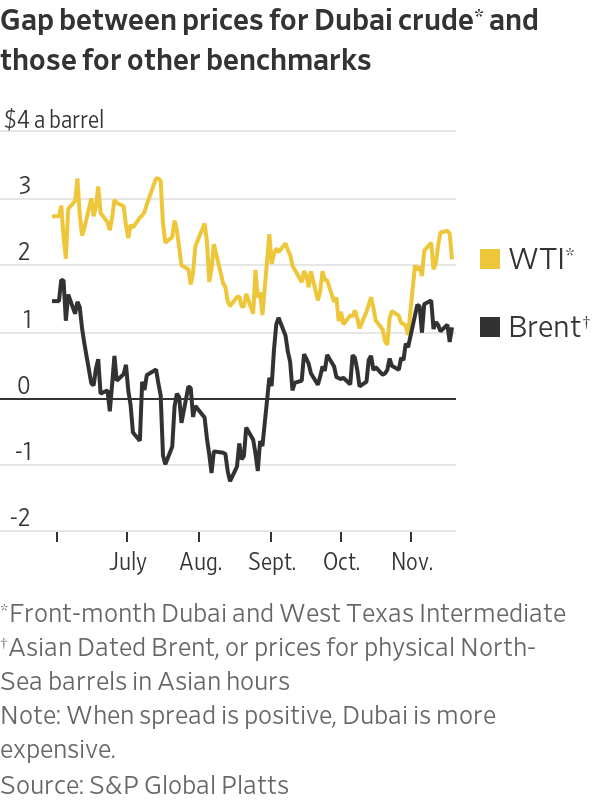 There is a new disconnect between oil prices to the east and west of the Suez Canal, reflecting the divergence between resurgent crude demand in Asia and sluggish consumption in the U.S. and Europe.

Fueled by China, and more recently India, oil consumption in Asia has rebounded since the pandemic eviscerated demand this spring. In the West, stop-start lockdowns have impeded travel and the recovery is expected to falter again during the current surge of coronavirus infections.

The disparity has nudged prices for Dubai crude, a basket of Middle Eastern oils mainly bought by Asian petroleum refiners, above West Texas Intermediate, the U.S. gauge for crude, and Dated Brent, the benchmark for the physical-oil market in the Atlantic.

Before the coronavirus pandemic, this was a rare dynamic. Dubai is typically cheaper because most Middle Eastern crudes are inferior in quality to the light, sweet oil drilled from under the North Sea and the U.S.’s Permian Basin. 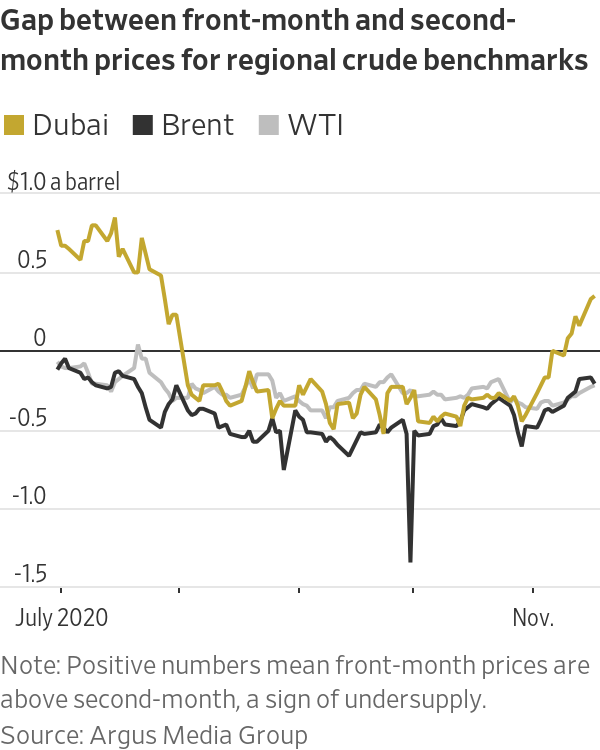 Since September, however, Middle Eastern crudes have regularly fetched a premium. On Wednesday, Dubai crude cost $43.80 a barrel, according to S&P Global Platts, making it $1.06 a barrel more expensive than Dated Brent. In 2019, Dubai stood 85 cents-a-barrel below Brent, on average. In 2018, the discount was double that.

“I can’t remember this level of disparity between the East and the West,” said Amrita Sen, founder of Energy Aspects Ltd., a consulting firm. “Yes, the West is going to recover a bit, but I really don’t think Western demand is going to get back to pre-Covid levels ever, whereas the East already has.”

Strong Asian demand has combined with output cuts by major producers to chip away at a glut of oil on land and at sea, propping up crude prices globally after they sank to historic lows in April. WTI futures rose 0.9% to $42.26 a barrel Friday, leaving them hovering near the upper end of the narrow range they have occupied since June.

By pushing Middle Eastern crude to a premium, the oil market is drawing U.S., European and African crudes toward Asia, where needs are greatest.

“What it tells me is that the Asian market is the pull, and continues to be the pull for the global oil market,” said Adi Imsirovic, senior research fellow at the Oxford Institute for Energy Studies and former head of oil trading at
Gazprom.
“That’s the only way you will get barrels out of the Atlantic Basin, including U.S. grades, and into Asia.” 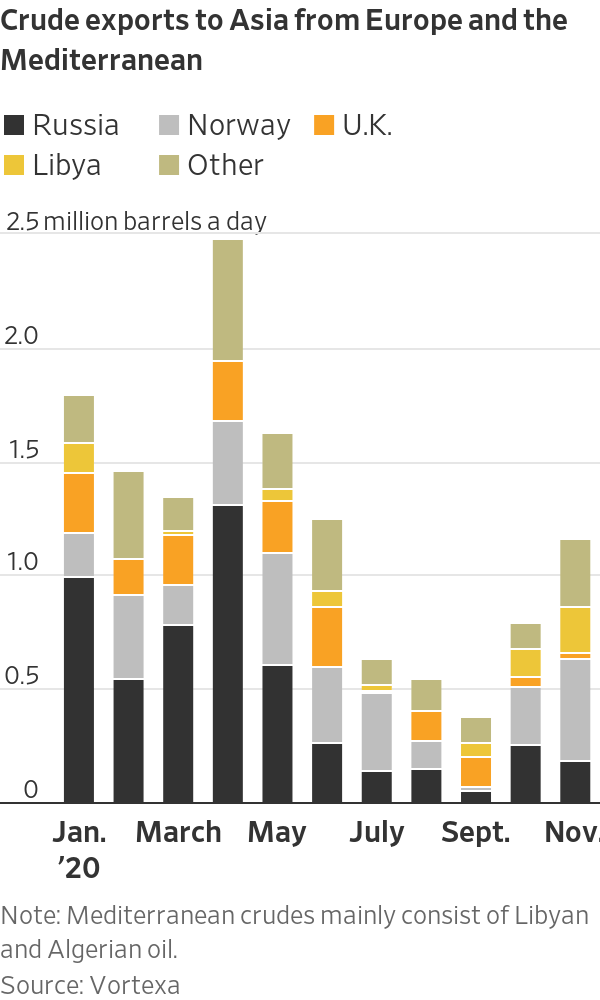 Crude exports from Europe and the Mediterranean to Asia have risen from around 380,000 barrels a day in September to 1.16 million barrels a day so far in November, according to Vortexa Ltd., which tracks oil tankers. The number of vessels heading toward China with U.S. crude jumped in September and October, too.

The mismatch between demand in Asia and the West has created another wrinkle in energy markets. Thanks to the oversupply of crude in the North Sea, it costs less to buy Brent and take delivery immediately than to take hold of the oil several months out. That pricing disparity is known as contango and can encourage traders to place unneeded crude into storage.

The opposite is true for Middle Eastern crudes. Spot Dubai prices are at a premium, signaling a shortage of oil due to high Asian demand and production curbs by major Gulf exporters.

That dearth may only get worse: The Organization of the Petroleum Exporting Countries and its partners are expected to extend cuts at a meeting starting Nov. 30.

The revival in Asia’s appetite for oil largely reflects the region’s success in bringing coronavirus under control. Gasoline consumption recovered fastest as authorities lifted lockdowns, rising from 5.3 million barrels a day in April to about 7.4 million in October, according to Sri Paravaikkarasu, director of Asian oil at consulting firm FGE. Demand for gasoil, used in industry, vaulted higher in line with manufacturing activity.

China is the only major economy where overall oil demand is on course to be higher in 2020 than in 2019, the International Energy Agency forecast this month.

How do you expect the oil market to change in the medium term and long term? Join the conversation below.

Covid-19’s resurgence in the U.S. and Europe, in contrast, has discouraged travel by car and plane, and forced some entire industries to close. Weak sales of fuels like gasoline and diesel have depressed profit margins for refiners, weighing on their purchases of crude.

Oil demand in the two regions for October stood at less than 90% of year-earlier levels, according to Jim Burkhard, head of crude-oil research at
IHS Markit.
The main reason: Many people still aren’t commuting to work, which accounted for around a quarter of U.S. gasoline demand before the pandemic.

“The Chinese demand story, and to a lesser extent India: that is a crucial pillar of the recovery in oil prices,” said Mr. Burkhard.

An abundance of fossil fuels combined with advances in technology to harness wind and solar power has sent energy prices crashing around the world. WSJ explains how it all happened at once. Photo illustration: Carlos Waters/WSJ (Originally Published July 21, 2020)

Write to Joe Wallace at Joe.Wallace@wsj.com

With Biden win, some Iranians lose hope ayatollahs will fall

Another Slump: FC Barcelona Versus Cadiz Result And What We