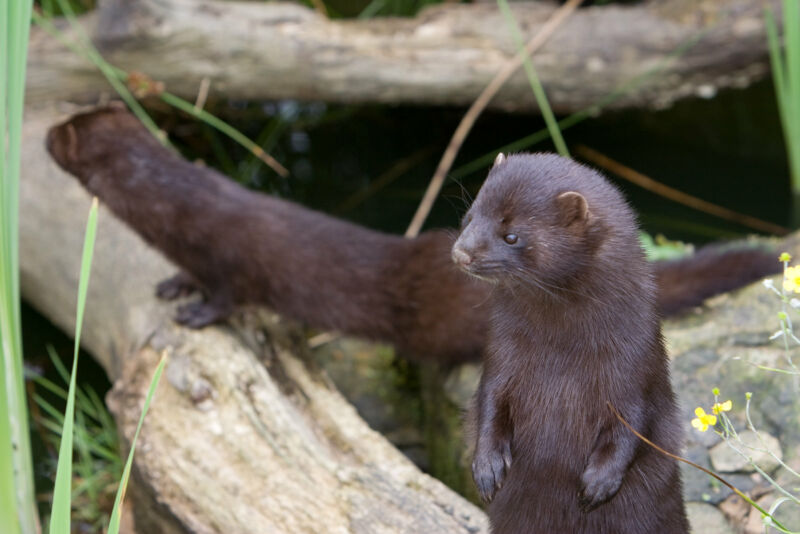 It’s still not clear what species carried the SARS-CoV-2 coronavirus that made its way into humans. But it has become increasingly clear that we can spread it to a large number of species, and a subset of those species are then able to pass it on to others. If those species are able to pass it back to humans, it adds to the risk posed by the COVID-19 pandemic. That’s because it provides a route for new infections that avoids all of the means we’re using to try to control the virus’s spread between humans. And there’s also the chance that the virus’s reproduction within an animal species would select for a mutation that would make the virus more dangerous to humans.

While we’ve already found the virus in cats and dogs, the big risk so far has turned out to be an unexpected source: mink. As early as August, it was clear that the virus was killing lots of the animals on US mink farms. Earlier this month, the discovery that the virus had spread back from mink to humans caused Denmark to decide to cull its entire population of mink. Now, with some people on edge because of that drastic action, we have a report that provides detailed tracing of the virus’ spread between mink and humans, providing us a better sense of the risks involved.

There and back again

The work was done in the Netherlands, which also hosts a substantial number of mink farms. The new paper, written by public health and veterinary officials, is essentially the equivalent of a contact-tracing report done for mink. It uses a combination of diagnostics to identify people and animals that have been exposed to the SARS-CoV-2, whole genome sequencing to understand the source of those infections, and interviews (limited to the humans) to help determine any actions that might influence the virus’s spread.

Overall, the researchers were able to trace infections on 16 different farms, although in at least one case, two farms had the same owner and shared workers. The researchers were also able to compare the genomes of the viruses found on those farms to a panel of over 1,700 viral genomes found in the general population of the Netherlands.

The first thing that is very clear from the survey: the virus is widespread among the farm workers. Of the roughly 100 people tested, 68 percent were either currently infected or had antibodies indicative of a past infection. A number of people were either known to have had a case of COVID-19 or reported having had respiratory symptoms during the interviews.

Samples were obtained from the people with active infections, and the entire genome was sequenced, allowing the researchers to reconstruct its evolutionary history. In each of these cases, the farm workers were carrying a virus that was most closely related to the strains known to be circulating in mink. This indicates that these workers were picking up SARS-CoV-2 from the animals in their care. Separately, it was clear that many of the farms had distinct infections, which suggested that the virus had spread from humans to mink multiple times.

Staying on the farm

That’s the bad news. The good news is that it doesn’t appear to be spreading much from farm workers to the general population. The researchers identified 34 infected people from the same post codes as the mink farms and sequenced the genomes of their viruses, too. In all cases, those viruses looked like the ones that were in general circulation among the Netherlands’ human population rather than the ones common on the mink farm. In only one case did one of the workers spread a mink SARS-CoV-2 strain to someone they spent time with.

(Many of the mink-farm workers in the Netherlands are from Poland, but viruses circulating in that country were even more distantly related.)

Does the virus seem to be adapting to mink in any specific ways? Not obviously, according to the sequences available. The 16 farms grouped into five distinct clusters of related viruses, and they don’t seem to have much in the way of common mutations, as you might expect for a virus adapting to a new species. And for the most part, the viruses that hopped back into humans from the mink simply looked like variants on the ones from the mink.

The only thing that might suggest some added risk of having the virus in mink is that it seems to pick up mutations with the animal at a somewhat faster rate than it does within humans. But because of the large uncertainties about when the infections in the mink farm started, that’s going to require considerably more data before we can say anything with confidence.

So overall, the news is somewhat reassuring. While it’s clear that the mink can give us back the virus we gave them, it hasn’t led to widespread infections in the communities around the mink farms. It’s obviously worth trying to figure out whether the workers took any precautions that helped limit the spread of their infections—something the interview material gathered by the researchers can undoubtedly address.

The other good news is that the virus doesn’t seem to have accumulated any mutations that clearly help it adapt to that species. That can clearly change with time, so we’ll want to continue monitoring these farms. But in the absence of that, the presence of the virus in mink doesn’t seem to pose a dramatic threat to humans. Obviously, we’ll want to look out for any data gathered in Denmark or other countries with large mink farms to see if the data is consistent with this. But if it is, it will be very reassuring.