It is easy to spot bubbles. Too easy: They seem to be almost everywhere, almost all the time. Worse still for those of us who try to spot excess, much of the stuff that was labeled frothy in recent years went on to make big money in 2020 for those who bought into it anyway.

The question for investors: Were the bubble calls just wrong? Or are we in a new era of wild speculation driven by cheap money that must inevitably come to an end?

I lean toward the latter. But the stunning performance of so many bubble stocks this past year shows that even if this turns out to be right eventually, there is plenty of scope to be horribly wrong in the meantime.

For one example, consider the bubble portfolio created in mid-2017 by

Paul McNamara,
an emerging-market fund manager at GAM. Featuring stocks and bonds labeled as bubbles by the financial
Twitter
community that year, it includes
Tesla,
Netflix,
Tencent,
a bitcoin fund, Canadian apartments, London property and long-dated U.S., Japanese and Argentinian bonds. Only one—the Argentinian 100-year bond—is down since being selected, having lost almost all its value.

If you had spread $900 equally across the portfolio’s nine holdings at the end of June 2017, you would now have more than $2,950, more than double what you would have got from the S&P 500. Remember, this was buying the stuff that many thought was already wildly overvalued.

Yet, the bubble-watchers were right on many of the stocks. Just not for long. Parts of Mr. McNamara’s bubble portfolio appeared to burst, but then came roaring back in 2020. If there is a bubble, it is a double bubble.

The
Grayscale Bitcoin Trust,
which holds bitcoin for a 2% fee, dropped 90% from its 2017 peak, but in 2020 it almost quadrupled to again trade above the value of the bitcoin it holds.

Tesla stock was below its mid-2017 price for most of the next 2½ years amid fights with regulators, fears about a cash shortage and missed production targets. Then it was electrified by the events of 2020, rising eightfold to become one of the largest companies in the world by market value.

Netflix and China’s Tencent didn’t reach their 2018 peaks again until they were boosted by lockdowns and cheap money on their way to a spectacular 2020. 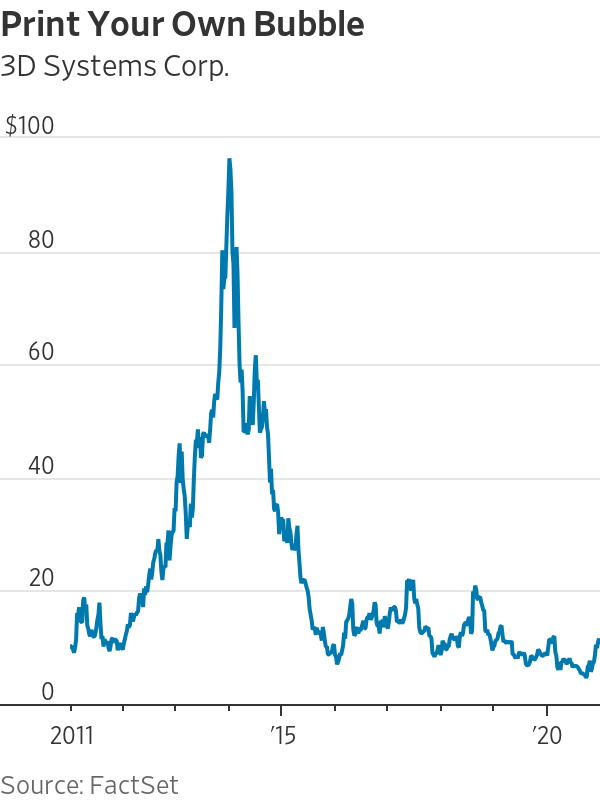 Even some of the stocks that went through their own mini-bubbles and busts earlier in the decade returned to form last year.

The 2011 excitement about rare-earth elements gave birth to the
VanEck Vectors Rare Earth/Strategic Metals ETF.
It is down 81% from that year’s high, but gained 63% in 2020. 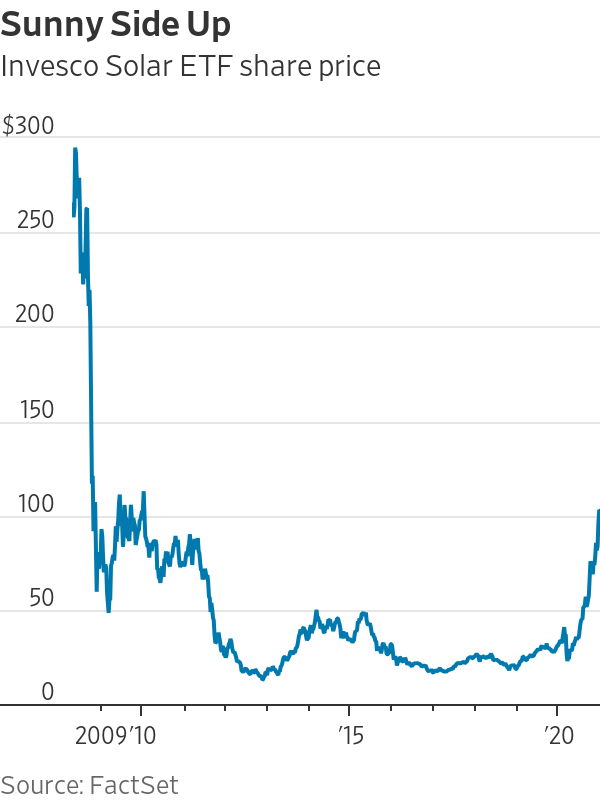 Solar collapsed with oil during the 2008 financial crisis, but was still frothy at the start of 2010. The
Invesco Solar ETF
(amusing ticker alert: TAN) fell 81% from 2010’s high, which was already down more than half from its pre-financial crisis high. This past year it more than tripled.

Cheap money often fuels speculative fervor, and this time has been helped by bored work-from-homers finding that day trading is a way to gamble their stimulus checks.

As usual the bubble stocks have a good story to tell about new technology and major shifts in consumption. They are helped by the superlow bond yields engineered by central banks. But their valuations and the scale of the price moves are extreme and probably unsustainable.

Probably. The danger for those of us calling out frothy markets isn’t only that high prices could be justified by fast-growing profits, but that bubbles can always become more extreme. If you doubt that, just look at 2020.

Write to James Mackintosh at James.Mackintosh@wsj.com

Curt Schilling Asks To Be Taken Off 2022 Hall Of