Investors asking themselves why DoorDash was able to turn a profit in the pandemic, while some of the food-delivery company’s biggest competitors couldn’t, should take a good look at the view from their suburban office windows.

Observers have been trying to parse the much-discussed unit economics graphic included in DoorDash’s initial public offering filing last Friday, as if it held a secret key. But DoorDash’s pandemic success might have less to do with how they make money off each order and more to do with exactly where they make it. 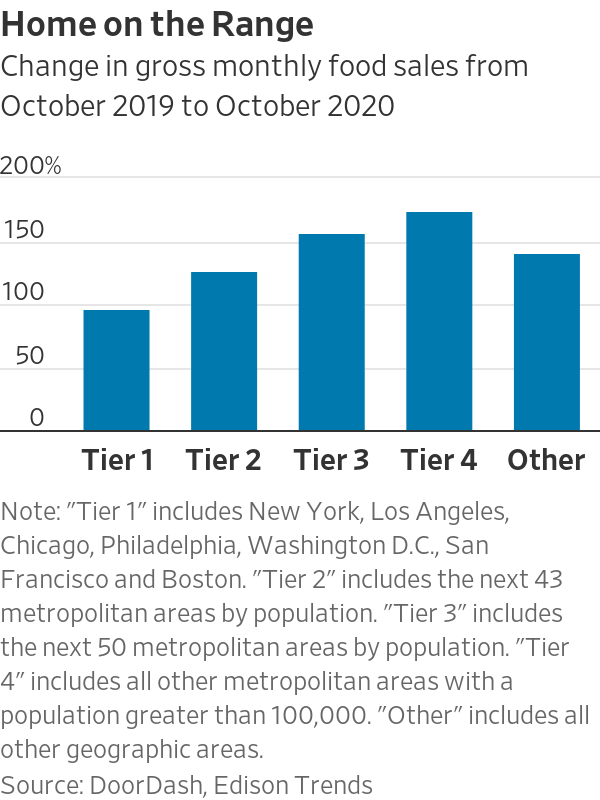 It is no secret that DoorDash’s stronghold in the food-delivery wars is America’s suburbs. That was an early strategy the company says it employed because, outside of the top tier metropolitan areas, the suburbs was where the fastest growth could be found. There was already a dominant and profitable food-delivery business in America’s largest cities in then market-leading
Grubhub.

DoorDash’s strategy has been effective: The company says it had just 17% U.S. market share in terms of total sales in January 2018 but that its share had grown to 50% as of October—nearly twice that of its next largest competitor, Uber Eats.

If planting roots in the suburbs was strategically smart in 2013, the pandemic has made it look like pure genius. The company was ready and waiting, as hungry consumers fled major metropolitan areas, following initial shelter-in-place orders, into smaller cities and suburbs. While Grubhub, for example, said in June that over two-thirds of its business was in “Tier 1” cities such as New York and Chicago, DoorDash says it now has a 58% category share of suburban markets, citing data from Edison Trends.

In this context, some of DoorDash’s eye-popping numbers seem less surprising: Revenue more than tripled in the nine months ended Sept. 30 versus the same period last year, as orders tripled over that time frame. According to DoorDash, suburban markets have hidden value. Suburbanites tend to place higher-value orders because they are typically families needing more items. 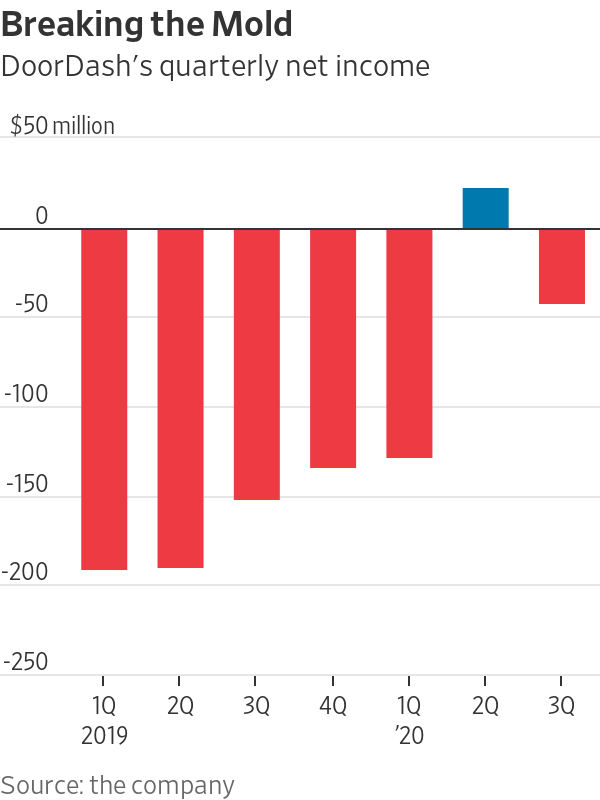 Meanwhile, lighter traffic, easier parking and a lower cost of living all reduce costs for suburban drivers compared with those in big cities. There also tend to be fewer delivery options from restaurants and greater distances from homes to restaurant options, making the value proposition of an on-demand delivery service particularly valuable to suburbanites. Over the course of the pandemic, at least, these dynamics have paid off: Edison Trends data published by DoorDash show U.S. growth in smaller metropolitan areas and suburban areas has well outpaced that of the largest cities.

Despite all that, DoorDash’s economics still look fragile. Even with the Covid-19 tailwind, the company registered net income of just $23 million in the second quarter and a loss in the third quarter. What happens if the bright lights of the big city lure customers back to the stamping ground of Grubhub and Uber Eats once the pandemic fades?

Believers in the food-delivery investment thesis don’t just need to crunch the numbers to pick the right stock, they need to be amateur sociologists too.