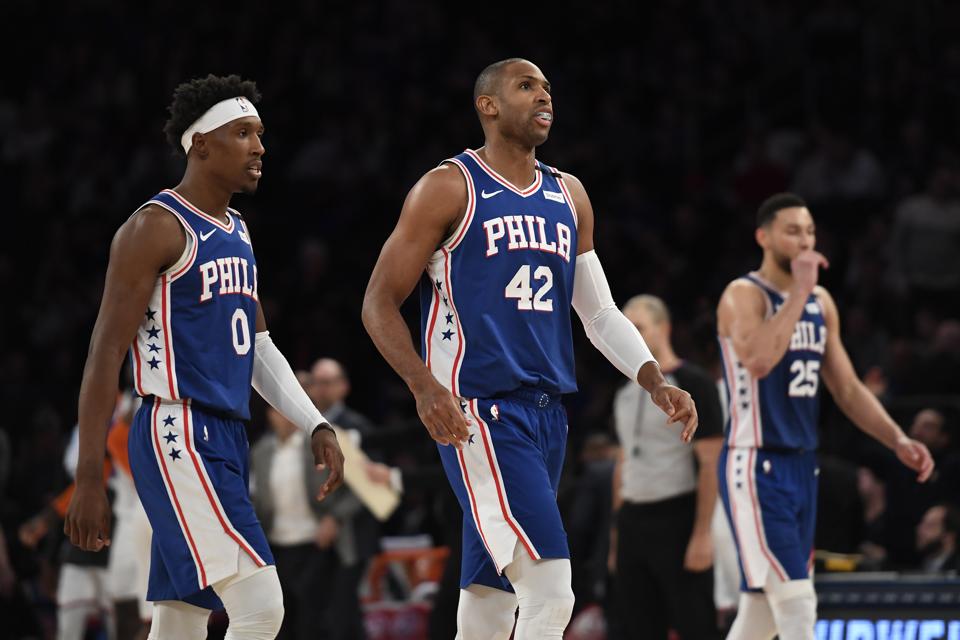 NEW YORK, NEW YORK – JANUARY 18: Josh Richardson #0 and Al Horford #42 of the Philadelphia 76ers … [+] head toward the bench during the second half against the New York Knicks at Madison Square Garden on January 18, 2020 in New York City. NOTE TO USER: User expressly acknowledges and agrees that, by downloading and or using this photograph, User is consenting to the terms and conditions of the Getty Images License Agreement. (Photo by Sarah Stier/Getty Images)

When he took over as the Philadelphia 76ers team president a few weeks ago, Daryl Morey inherited an overly expensive, poorly constructed roster.

It took him one day to fix many of the past regime’s mistakes and assemble a supporting cast that better complements Ben Simmons and Joel Embiid.

Before the 2020 NBA draft even began Wednesday, Morey agreed to send Al Horford to the Oklahoma City Thunder along with the No. 34 pick, a lightly protected 2025 first-rounder and the draft rights to guard Vasilije Micic for Danny Green and Terrance Ferguson, per ESPN’s Adrian Wojnarowski. As much as it hurts to give up two picks and the draft rights to Micic, who is one of the most promising guards in Europe, flipping the remaining three years and $81 million of Horford’s contract made it worthwhile.

The Sixers envisioned Horford serving as both insurance for Embiid as the backup center and a frontcourt complement to him in the starting lineup, but only half of that came true. With those two on the floor, the Sixers averaged only 104.0 points per 100 possessions this past season, which ranked in the 10th percentile leaguewide. Add Simmons to that mix, and they averaged a horrific 99.2 points per 100 possessions.

Their defense was elite with that trio on the floor—they allowed only 99.9 points per 100 possessions, which ranked in the 99th percentile leaguewide—but the anemic offense undermined the dominant defense. The Sixers went only 20-14 during games in which all three players were healthy, and former head coach Brett Brown resorted to benching Horford in mid-February to coax the best out of his mismatched roster.

In a vacuum, Green is a far less talented player than Horford. The 33-year-old has averaged only 8.9 points and 3.5 rebounds in 25.4 minutes per game across his 11-year NBA career. However, he’s a career 40.0 percent shooter who has won three NBA titles while serving as a two-way role player alongside Kawhi Leonard (in both San Antonio and Toronto) and LeBron James and Anthony Davis with the Lakers last season.

By flipping Horford in a package for Green, Morey both fixed his biggest roster issue and opened the door for another move later in the night.

Ahead of the draft’s second round, the Sixers shipped Josh Richardson and the No. 36 overall pick to the Dallas Mavericks in exchange for Seth Curry. It might seem like an overpay on the surface—particularly since Richardson was all that came back in the Jimmy Butler sign-and-trade last summer—but it again speaks to Morey prioritizing fit over raw talent.

Curry is a career 44.3 percent three-point shooter, which makes him one of the best snipers in NBA history. Among players who have attempted at least 1,000 career three-pointers, Curry ranks second in terms of hit rate from deep, trailing only Steve Kerr (45.4 percent). He isn’t nearly as potent defensively as Richardson, but that elite sharpshooting ability is what drew Morey to him.

“Having a truly gravity-elite shooter really changes the dynamic for Ben and Joel,” Morey told reporters after the draft. “… When Joel and Ben have had that, it’s actually insane how good those lineups and how good those teams played when everyone was healthy.”

Morey stated his goal heading into the night was “trying to improve the fit” and “increasing our flexibility,” but trades weren’t the only way he sought to accomplish that.

With the No. 21 overall pick, Morey snagged Kentucky guard Tyrese Maxey, who was widely projected to be off the board by that point. Maxey was the 10th-ranked player in his recruiting class, according to 247Sports, and he put NBA scouts on notice when he erupted for 26 points on 7-of-12 shooting (3-of-7 from deep) in his collegiate debut against Michigan State.

However, Maxey wound up being a streaky shooter during his lone season at Kentucky, knocking down only 33 of his 113 three-point attempts (29.2). Whether that inconsistency is what scared teams in the top 20 away, Morey was ecstatic to stop his draft-day slide.

“Historically, guys with this pedigree coming in who play at an effective level on a top team, you’re just putting yourself in a really good spot to get a player who can help over time,” Morey said. “… This is a guy who constantly works on his game, has improved his game every year and is also a big team guy. Those things are important. If you have a top-level talent like him, plus you love basketball and you’re willing to work, continue to improve, that’s where you end up having a top player.”

Although the Sixers sent out their first two second-rounders in the Horford and Richardson trades, they landed two potential steals with Arkansas guard Isaiah Joe at No. 49 and DePaul big man Paul Reed at No. 58.

As a freshman, Joe knocked down an outrageous 3.3 three-pointers per game at a 41.4 percent clip. That shooting percentage dipped to 34.2 percent as a sophomore, but he still averaged 3.6 triples per night.

“Isaiah Joe is not too complicated,” Morey said. “He’s just one of these elite shooters coming out of college. A little more defensive potential in our minds than people give him credit for. It’s not what he’s gonna hang his hat on, but the shooting is truly elite.”

John Hollinger of The Athletic, who spent most of the 2010s working as an executive for the Memphis Grizzlies, dubbed Reed “the most undervalued player in the draft, hiding in plain sight as a young junior mired on a brutal DePaul team.” The 6’9″, 220-pounder averaged 15.1 points on 51.6 percent shooting, 10.7 rebounds and 2.6 blocks in 31.7 minutes per game for DePaul this past season, but the Blue Demons went only 16-16 (including a 3-15 record in Big East play).

Morey appeared especially intrigued with how Reed might eventually fit alongside Simmons. He said Reed “can guard multiple positions,” and whenever Embiid is off the floor, he suggested the Sixers can build a “dynamic, uptempo” offensive attack with Reed and Simmons.

The Sixers still have holes to fill once free agency begins Friday, particular at the backup point guard and backup center spots. Even after their draft-night moves, they’re still well above the $132.627 million luxury-tax threshold, which means they’ll be limited to only the $5.7 million taxpayer mid-level exception and veteran-minimum contracts beyond that.

After the draft, Morey hinted that the Sixers may tread lightly in free agency.

“We added some flexibility with the moves tonight, so that’ll give us some more optionality in free agency,” he said. I think frankly, free agency is where most of the bad deals happen, so Elton and I will be careful through that. But we hope to add players in a way that both helps the team and doesn’t hurt our ability to continue to improve the team.”

Above all else, Morey made it clear that he’s intentionally constructing a roster around Simmons and Embiid to maximize their strengths.

“It’s important that the guys fit and the guys are here for multiple years. We’re big on developing and building through the draft. … We have two young superstars in their prime, and you want to put around them guys they can build with.”

If his first draft with the Sixers is any indication, Morey will be far more adept at that than his predecessors were.

Unless otherwise noted, all stats via NBA.com, Basketball Reference or Cleaning the Glass. All salary information via Spotrac.