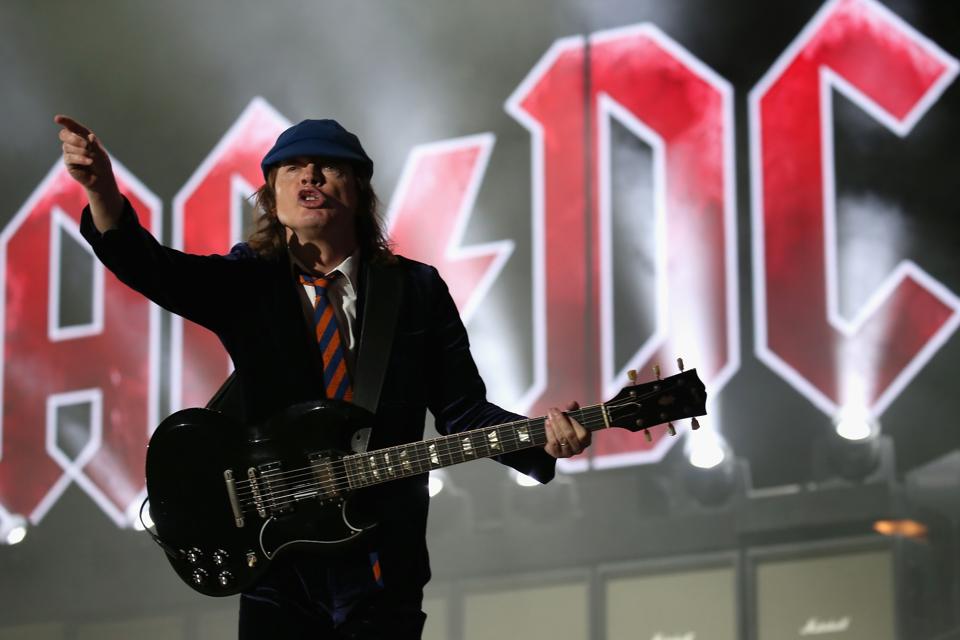 AC/DC will release their seventeenth studio album, Power Up, in November. With a new single released … [+] on Weds., taping a segment for NFL Network, and an inability to tour in the pandemic, could they wind up playing the Super Bowl to reach a massive TV audience? (Photo by Karl Walter/Getty Images for Coachella)

If there’s one thing we can all agree on right now it’s familiar solid ground is what we need. In the pandemic landscape and political turmoil, a soothing dose of the familiar is the exlexer the world could use.

Since 1973, you could set your watch to AC/DC. The formula has never waivered. Mix the blues with hard rock and a dose of old-school punk and you always are guaranteed a stripped-down, no-frills ride that was never pretentious, yet reached across the masses. AC/DC is the everyperson’s soundtrack.

The band also has had more lives than a cat. They lost lead singer Bon Scott in 1980. Has seen members Phil Rudd and Malcolm Young require subs for tours as they dealt with substance abuse, but it wasn’t until 2014 and the subsequent aftermath of the Rock Or Bust tour that the band seemed destined to call it quits. That year, Malcolm Young, the band’s founder and true driving force with his brother Angus, retired due to his battle with dementia.  Nephew Stevie Young was pulled in to replace him, and the band saddled on. During the tracking of the album, Rudd’s drug use became a severe problem that caused tracking to be pushed out. The problem got completely out of control when he was arrested in New Zeland for “attempting to procure a murder,” and Chris Slade, who played on the band’s Razor’s Edge album was pulled in for the tour. Rudd was never seen in any promotional materials for the album.

But when the 2016 Rock Or Bust tour got underway, singer Brian Johnson started dealing with a significant hearing loss that dealt with his pitch. “The docs said, ‘Deaf is deaf, son,’” Johnson said in an interview with Rolling Stone. “[Bassist] Cliff [Williams] and Angus didn’t want to be responsible for me damaging my ears any further. … S*** happens. At least it wasn’t terminal.” On March 7th, 2016, the band announced that the remainder of the tour would be postponed due to Johnson’s condition. Eventually, Guns ‘N Roses frontman subbed for Johnson and the band was able to finish the tour. By the time the tour ended, Williams announced he was retiring. All seemed over. Then, in 2017, George Young, the eldest of the brothers and producer of many of the band’s early albums died. Shortly thereafter, Malcolm Young passed away from his battle with dementia.

Ultimately, those deaths paved the way for the band to reunite. Angus Young saw that Phil was clean and back in control of his life. Johnson had been working with a special audiologist to gain his hearing back. Once Angus got them to commit, it was easy for Williams to come out of retirement.

What has come out of the fire is the band’s seventeenth studio album, Power Up, which will be released on November 13. The first single, Shot In The Dark dropped at midnight ET on Wednesday. As the Back In Black album was dedicated to the late Bon Scott, so too is Power Up dedicated to Malcolm Young.

But the album is much more than a dedication to Malcolm. The riffs that made for Power Up were part of the session for 2008’s Black Ice album. All tracks on the album are co-written by Angus and Malcolm Young. As engineer Mike Fraser said in a podcast this week with Spectrum Sports 360’s Jon Alba, the process of recording had a familiar feel.

No tour is planned currently due to the pandemic, which suddenly makes one possibility enticing.

The biggest audience the band could perform for in the pandemic would be the Super Bowl slated to be played Sunday, Feb 7th at  Raymond James Stadium in Tampa, FL. While Taylor Swift has been given the best odds of being the artist selected, those odds were set before AC/DC’s comeback.

But there are other reasons to speculate that AC/DC could be part of the halftime equation. According to Alba, Angus Young and Brian Johnson taped an interview for NFL Network. The band has already licensed Shot In the Dark for use in a new Dodge commercial, who is likely an ad sponsor for the Super Bowl.

AC/DC is the biggest band left standing from the 1970s. While there are questions about whether a more youthful artist should be selected, it has been a decade since a legacy band (The Who) has performed at the Super Bowl.

And it would be a great starting off point for new Super Bowl Halftime executive producer Jesse Collins to land the band.

But maybe the biggest reason for selecting AC/DC would be this: for as old as they are, they still resonate with fans across the age spectrum. Every 3rd down has the stadium PA playing the start of Hells Bells. Thunderstruck is an anthem heard throughout all sports. In other words, “AC/DC” and “sports” are the perfect marriage.

If we can dream about normalcy returning to our lives at some point, maybe AC/DC playing to the biggest television audience in the world as part of the Super Bowl might be the way to, at least for a few moments, feel what life in the pre-pandemic was like. Power up.