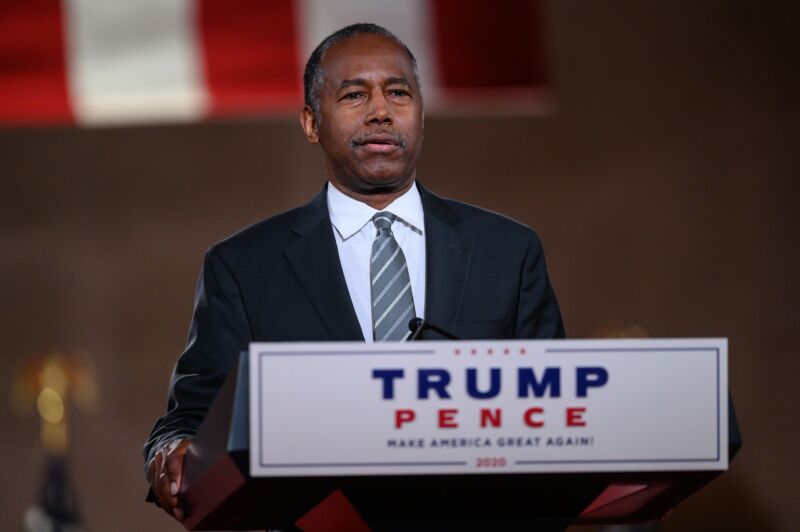 Enlarge / US Housing and Urban Development (HUD) Secretary Ben Carson speaks during the final day of the Republican National Convention at the Mellon Auditorium on August 27, 2020, in Washington, DC.
Getty | Nicholas Kamm

The United States surpassed 10 million coronavirus cases Monday as yet another cluster within the White House grew to at least eight.

Ben Carson, a 69-year-old neurosurgeon and the current secretary of housing and urban development, tested positive for the virus early Monday. This afternoon, news broke that David Bossie, one of President Donald Trump’s advisors, is also infected with the pandemic virus and tested positive Sunday.

On Tuesday night, Trump hosted a party at the White House with hundreds of people—many unmasked—to watch the election results unfold. Meadows, Carson, and Bossie reportedly attended the event, raising concern for further virus transmission and the possibility that the celebration was a superspreader event.

In an emailed statement to The New York Times, HUD’s deputy chief of staff Coalter Baker confirmed Dr. Carson’s positive test and said that Carson “is in good spirits and feels fortunate to have access to effective therapeutics which aid and markedly speed his recovery.” The Times noted that Baker did not specify the treatments Carson had received or would receive during his recovery.

How Bossie is faring with his infection is unclear. The Trump campaign advisor, who has taken a leading role in Trump’s legal and political challenges to the election results, tested positive while at the White House on Sunday, according to Bloomberg.

This is at least the third outbreak of cases at the White House since the pandemic began. A few weeks ago, several members of Vice President Mike Pence’s inner circle tested positive. That cluster included the vice president’s chief of staff, Marc Short. Though Pence was considered a close contact of Short, he did not quarantine and instead continued to campaign for re-election.

In another cluster in late September, well over two dozen people tested positive, including Trump himself. The now lame-duck president spent several days in the hospital and received a kitchen-sink treatment strategy including two experimental treatments and a powerful steroid used in the most severe COVID-19 cases. Yet Trump promptly downplayed the virus upon his hospital release, as he has throughout the pandemic.

Trump’s infection came to light following a closely packed celebration of Amy Coney Barrett’s Supreme Court nomination. The celebration, which took place both in the Rose Garden and inside the White House, was largely unmasked, like the election-night gathering. The event was linked to cases in aides, White House staff, Trump advisors, and reporters who attended the event. First lady Melania Trump and the Trump’s teenage son, Barron, also tested positive.

The infection flare-ups at the White House are not surprising to public health experts, who note that officials have consistently downplayed the virus and been lackadaisical about mask wearing and physical distancing.

The new cluster is “emblematic of the national failure to control COVID,” Tom Frieden, former director of the Centers for Disease Control and Prevention under President Barack Obama, told the Times.

The United States is currently seeing runaway disease transmission 10 months into the pandemic, with the third and highest peak in cases yet. Since last Wednesday, the country logged four straight days of record-breaking case counts, topping 128,000 new cases on Saturday alone. Sunday’s total fell to 102,000 cases, as case counts tend to dip during the weekend. Hospitalizations are already spiking, and upticks in death are expected to follow.

Experts expect the numbers to continue their vertical rise and fear how dire the crisis will become as the US heads into the winter and a series of holidays typically marked by large gatherings.

In addition to the more that 10 million cases already logged, the US has seen nearly 238,000 deaths.