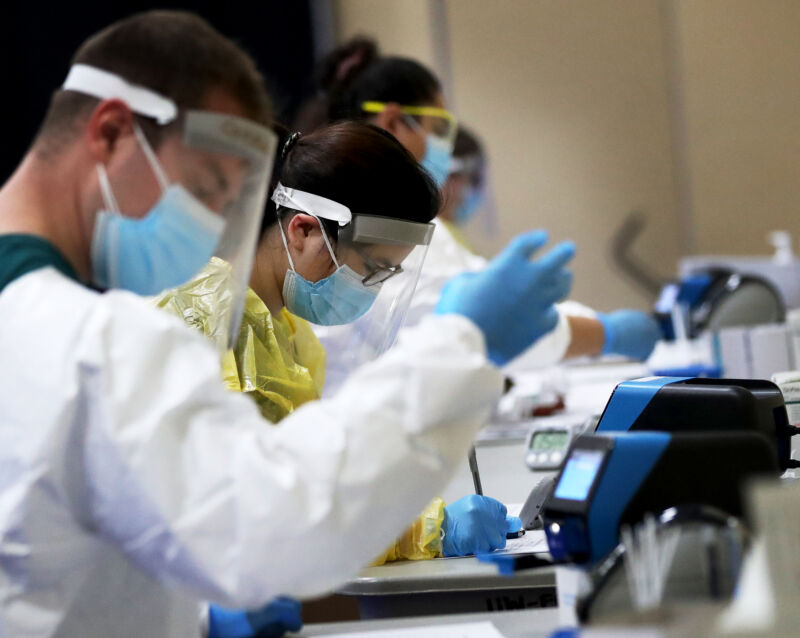 The United States on Wednesday reached an alarming milestone in its failed pandemic response: a day’s tally of new coronavirus cases reached over 100,000 for the first time. But the record was short-lived. Today, Thursday, new cases surpassed 116,000.

The country’s third spike in cases is now towering over those before it, which saw peaks of daily new cases no higher than around 76,500. It’s unclear how high the new peak will ultimately get, but it’s likely that Friday will see yet another frightening record.

Overall, the country has seen a 20 percent jump in cases since last week, according to The COVID Tracking Project. While nearly every state in the country is seeing cases increase to some extent, the areas propelling the rise are the Midwest and the Mountain West. In fact, the Midwest’s current number of cases per capita are well above that of any other region during the pandemic, the Project notes in a blog post Thursday.

In particular, cases in Wisconsin and Illinois are skyrocketing. Indiana, Kansas, Michigan, Minnesota, and Ohio have also all set new records for single-day case counts in the past week. As for the Western states, Montana, North Dakota, South Dakota, and Wyoming are all seeing ongoing surges relative to their smaller populations.

With the vertical rise in cases comes surges in hospitalizations. Nationwide, there are currently more than 53,000 people hospitalized with COVID-19, an increase of 13.5 percent from last week. Hospitalizations are rising in step with places seeing increasing cases.

Though spikes in deaths typically lag behind spikes in cases by several weeks, deaths are already on the rise. There were over 1,100 deaths reported Thursday, bringing the seven-day rolling daily average to 869. Since last Wednesday, just over 6,007 people in the United States have died from the pandemic coronavirus, an 8 percent increase over the death count the previous week.

Public health experts have been sounding the alarm on the country’s devastating third peak, which is coming just as the weather turns cold and we head into a series of holidays celebrated with large gatherings. In an interview last week, top infectious disease expert Anthony Fauci told The Washington Post that “We’re in for a whole lot of hurt. It’s not a good situation. All the stars are aligned in the wrong place as you go into the fall and winter season, with people congregating at home indoors. You could not possibly be positioned more poorly.”