Clare Dunne (front) as Sandra in ‘Herself.’

Clare Dunne never really planned to play the lead role in Herself, the acclaimed Irish drama that tells the story of an abused mother trying to build a better life for her two daughters.

“Honestly, I just want to get the bloody thing made,” the actor and co-writer explained. “I was originally sending it out to a lot of known actresses and Irish actresses. That was when I was writing it by myself over the first couple of years. When the director, Phyllida Lloyd, came on board, she was like, ‘You have to play it this role.’ We had worked in theatre together so knew each other already. I just said that that’d be great, but I didn’t think we’d get funding if I did.”

“I was anxious about Herself ending up in development hell for several years, and eventually, I’d be too old to play her anyway. Thankfully it was somebody as amazing and respected as Phyllida saying she wanted me to play the role, and Sharon Horgan, one of the film’s producers, really heard that and just said, ‘Let’s do it.’ That was incredible.”

Dunne had a very clear vision for how she wanted her character, Sandra, to be seen.

“I always wanted to show this woman was not a victim, that she was actually more like a soldier surviving this horrific world that she had originally entered by just falling in love, building a family and a home life,” she mused. “It’s not that she’s either really confident or has low self-esteem, she’s this survivor, and this mother determined to do things for her children. That gave the heartbeat to the rest of the story. It was incredibly hard. Any time it got too far one way, we’d pull it back. It was about trying to find the joy of life that pulls her through being equally as important as showing the realities of the PTSD and the hell she is suffering.”

“I spent a day with an amazing woman who had been through so much herself, and she set up her own refuge center, a secret one where women can go to very safely. That inspired me. I saw her absolute determination, her spirit, and how happy she was now. She had a gorgeous house with her daughter. She’s a single mother and so happy in her life. The stories she told me were like something from a horror movie, and I couldn’t believe that that was the same woman standing in front of me.”

That was a eureka moment for Dunne.

“Meeting women like her didn’t make me go, ‘Oh my God, it’s awful.’ It made me think, ‘People go through some stuff in their life, and they do come out the other side.’ I know it’s not a fairytale for everyone, and the experience to get there was horrendous, but I definitely met a lot of people that have gone through and survived. It just made me more emboldened to tell the story in the right tone.”

She continued, “There is a particular moment in Herself, in a courtroom, that came from a very special place. I came up with that in the first year that I started writing the script. I came from the heart of Sandra as a mother, as a woman, who had been through this hell and needed to speak her truth. Even though that speech might have been edited or shortened, it was fundamentally always the same. There is a line where she says, ‘You ask me why didn’t I leave him, but you never ask why didn’t he stop?’ That was one of the key lines that I wrote in the very early stages. It was something that a key worker herself said to me when she was talking to me about her frustration with the system and the number of times she had heard that question being asked.” 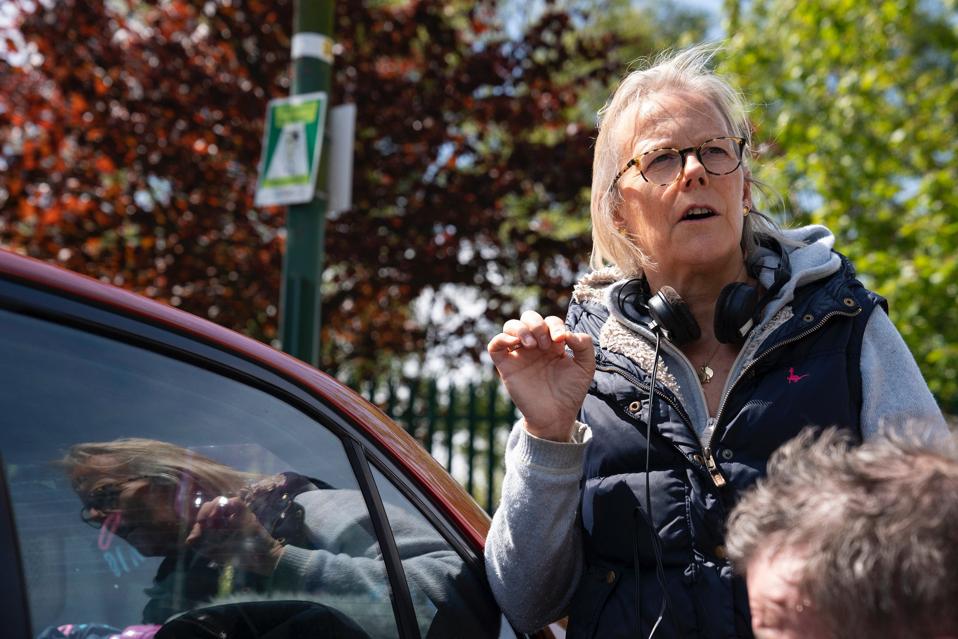 Director Phyllida Lloyd on the set of ‘Herself.’

Having Phyllida Lloyd, the director and producer best known for the $615.7 million-grossing Mamma Mia! and two-time Oscar-winning The Iron Lady, helm Herself was the icing on the cake for the impeccably executed drama.

“What Phyllida is always able to bring is what you don’t dare to imagine yourself. She helped me to lean into some things and go further than I, certainly when it came to the drama,” Dunne revealed. “She made me a story builder. I think she made what could be considered quite small look epic. She brought that to life. There are some glorious moments in the movie based on her creating improvised situations between the actors. I think that’s what she brought to this in a big way. She let the children do so much acting that was just nothing to do with the script. Even just them playing. She let that energy inform us and inform the crew as well. This is a woman building a house for her children, and they were always around playing and laughing. It was a great reminder.”

Maintaining the realism was imperative to Dunne.

“We had a family give us this amazing back garden to build an actual house in. Although we certainly made some noise, the neighbors were understanding and wouldn’t go too crazy,” she recalled. “It was incredible to watch our crews fast forward build the house. We come to it at different stages of the build, which meant it needed to happen much quicker. It was kind of a miracle watching it come together, and it enabled us to experience what the characters would be experiencing. Also, the house really was exactly like the design in the movie other than being slightly different on the inside to allow us to get certain angles.”

“There’s a big fire scene at the end of the movie. It is very dramatic, but it was a very manicured burn if you know what I mean. We needed the structure to burn a certain way. The good news is that everything that wasn’t destroyed was removed and was used to build another house somewhere else, so we didn’t waste it. It has become part of someone’s real home, and that’s kind of cool.”

Herself is available now on Prime Video.