The pipeline of Chinese technology startups planning to go public is moving along despite the sudden suspension of Ant Group Co.’s blockbuster listings.

Kuaishou Technology, an operator of a popular short-video and live streaming platform that competes with ByteDance Ltd. in China, filed for an initial public offering in Hong Kong that could take place in the coming months.

The Beijing-headquartered company is aiming to raise about $5 billion and earn a valuation of roughly $50 billion by listing the international financial hub, according to a person familiar with the situation. Kuaishou’s market debut could take place as soon as January 2021, the person and another individual familiar with the plans said.

Kuaishou was co-founded and is controlled by Su Hua and Cheng Yixiao, software engineers who previously worked for Google China and Hewlett Packard respectively, as well as at other companies. Chinese internet giant
Tencent Holdings Ltd.
is one of its largest shareholders with a 21.6% stake in the company. Kuaishou also counts Baidu Inc., Sequoia Capital China and other venture-capital and private-equity firms among its shareholders. 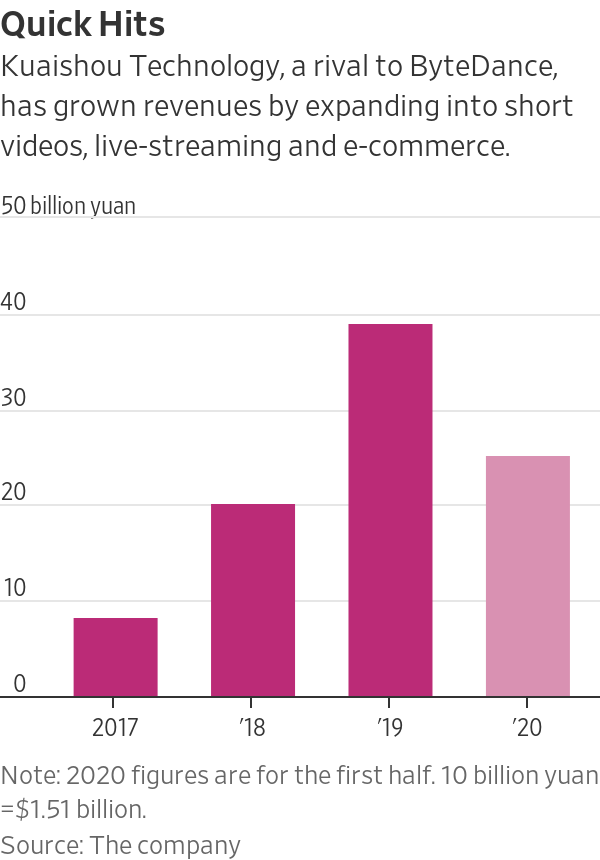 The company raised $3 billion from investors in early 2020 in what was its sixth private funding round since 2014. It raised a total of $1.8 billion in the earlier funding rounds, according to its prospectus.

Kuaishou’s planned stock sale is the latest in a horde of Chinese companies that are seeking listings in Hong Kong, during one of the biggest gold rushes for technology stock investments in years.

Companies and their bankers appear undeterred by China’s surprise decision to halt the IPOs of Ant, which earlier this week was forced to suspend concurrent listings on both the Hong Kong stock exchange and Shanghai’s fledging STAR Market. Before the suspensions, Ant had already collected investor orders that would put it on track to raising at least $34.4 billion in what would have been the world’s largest IPO.

Kuaishou is also planning to go public at a time of rising U.S.-China tensions, which have created trouble for Bytedance’s operations abroad. The Trump administration has sought to ban the downloads and updates for Bytedance’s video-sharing app TikTok in the U.S. and force a sale of its major stake to U.S. investors, citing national security. A U.S. District Judge in Washington has granted a preliminary injunction against a Commerce Department curb on TikTok downloads and mobile-app updates that was supposed to take effect in late September.

The bulk of Kuaishou’s users and operations are in China, making it relatively immune to the U.S. tensions and issues facing Bytedance. In India, however, bans in June and September on dozens of China-related mobile apps included three of its apps. The company said the continuing friction between China and the U.S. as well as India “may have an adverse effect” on its business and expansion plans.

Days before Chinese fintech giant Ant Group was scheduled to go public in what would have been the world’s largest listing, regulators put plans on hold. WSJ’s Quentin Webb explains the sudden turn of events and what the IPO suspension means for Ant’s future. Photo: Aly Song/Reuters

The company’s origins date back to 2011, when a mobile app called GIF Kuaishou was launched and used by people to create and share animated GIF images. In 2013, Kuaishou rolled out a short-video social platform, which subsequently extended to live-streaming services in 2016.

In the first half, Kuaishou recorded average daily active users of 302 million, who generally spent more than 85 minutes a day on its app. An e-commerce business the company started in 2018 generated “gross merchandise value” of 109.6 billion yuan, equivalent to $16.6 billion, in the first half of this year.

The company reported revenue of 39.1 billion yuan last year. In the first six months of 2020, revenue jumped 48% to 25.3 billion yuan, from the same period a year ago.

Kuaishou reported a first-half operating loss of 7.6 billion yuan. Its net loss for the period totaled 68.1 billion yuan, which was due to higher expenses and fair-value changes of its convertible redeemable preferred shares.

Kuaishou hired units of
Morgan Stanley,
Bank of America Corp.
and
China Renaissance Holdings Ltd.
as joint sponsors for its planned IPO, according to the preliminary prospectus.