China’s stock market ended 2020 on a high note, with a key benchmark up 27% and at a multiyear high, reflecting the country’s economic revival during the coronavirus pandemic.

The move capped a year that broke records for stock issuance and brought a big run-up in share prices which together helped boost the value of Chinese stocks globally by about $5 trillion.

After the European Union and China agreed on terms of an investment accord, the CSI 300 Index—which tracks the top 300 stocks traded on exchanges in Shanghai and Shenzhen—rose 1.9% Thursday to reach its highest level since June 2015. The mainland benchmark registered a 27% gain for the year, while the Shanghai Composite Index ended 2020 up 14% at a nearly three-year closing high.

For 2021, investors and bankers expect China will continue to benefit from low global interest rates, and the huge amounts of funds sloshing around the world’s financial system, as well as the country’s rapid post-pandemic rebound. In October, the International Monetary Fund forecast Chinese GDP will jump 8.2% in 2021, following an estimated 1.9% increase in 2020.

Magnus Andersson, regional co-head of equity capital markets at
Morgan Stanley,
said international investors are “starved for growth” and so are keen on buying into good Chinese companies that are expanding quickly. “There’s a long queue of very high-quality companies with real growth and exciting stories lining up to come to the market,” Mr. Andersson said.

Other potential candidates include JD Logistics, a unit of e-commerce firm
JD.com Inc.,
and Douyin, the Chinese sister to TikTok, which is owned by ByteDance Ltd., according to bankers and to media reports. JD Logistics and ByteDance both declined to comment.

Aaron Arth, head of the financing group in Asia ex-Japan at
Goldman Sachs,
said Chinese technology, health-care and consumer companies would remain some of the region’s most important issuers of equity. “2021 is shaping up to be as busy, if not a busier year, than 2020,” he said.

In the year to Dec. 30, Chinese companies have sold more than $279 billion of stock, up 72% compared with 2019, according to Dealogic. That tally includes initial public offerings, secondary listings, and follow-on stock and convertible bond deals. It covers mainland markets, as well as offshore share sales in Hong Kong and the U.S. 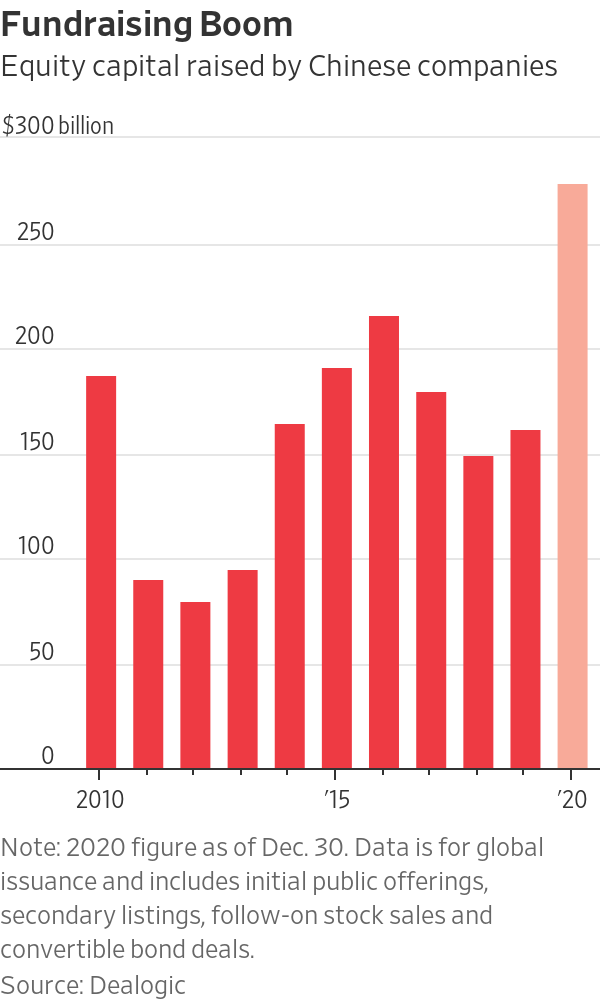 As in 2020, secondary listings of companies whose shares already trade on other exchanges are likely to be big business in 2021. This could include more U.S.-listed firms making a debut in Hong Kong, following in the footsteps of businesses such as
Alibaba Group Holding Ltd.
and JD.com, and more Hong Kong-listed firms raising fresh funds at a higher valuation from Shanghai’s STAR Market.

Some companies will continue to seek out U.S. IPOs—even though the threat of potential forced delistings looms over Chinese stocks in America. Mr. Arth at Goldman said American markets remained attractive to many Chinese companies, allowing them to list faster, tap into a deeper pool of funds, and raise capital in more ways than was possible in other markets. “Liquidity is king in capital markets,” he said.

Aside from new listings, more foreign money is ready to pour into Shanghai- and Shenzhen-listed stocks, but the heady price gains seen recently are unlikely to be repeated.

International investment in China’s onshore stock and bond markets has hit records in 2020, buoyed in part by index inclusions in recent years. That trend is likely to continue, with a recent HSBC survey of big global investors finding 71% of those who invest in stocks plan to increase their mainland China portfolio over the next 12 months. 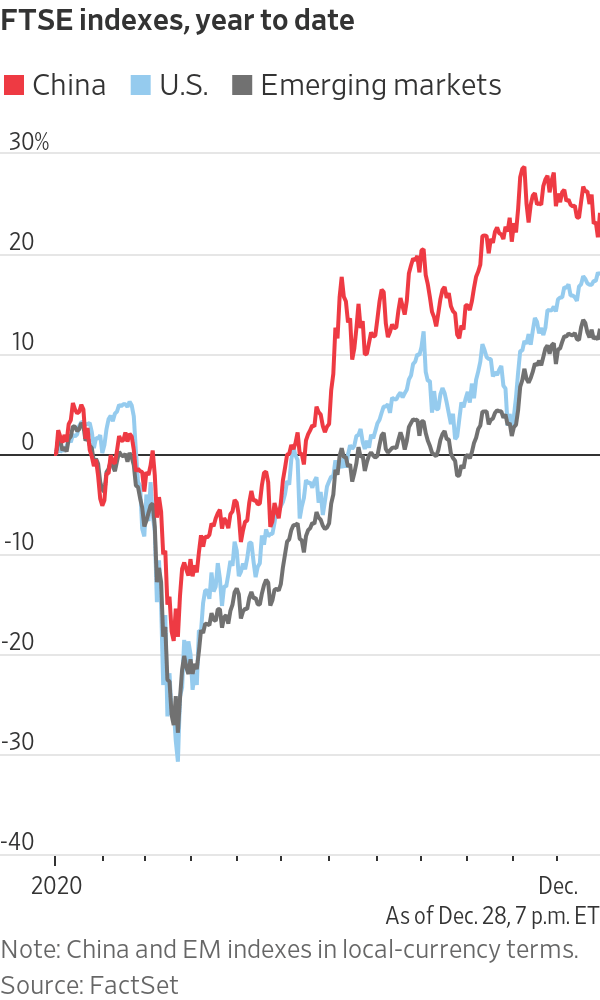 Among those who are bullish on China is Zurich-based Norman Villamin, chief investment officer for wealth management at Swiss bank Union Bancaire Privée. The bank handles about 20 billion Swiss francs, the equivalent of $22.7 billion, in so-called discretionary portfolios that it manages on behalf of clients.

Mr. Villamin said China had moved quickly from recovering from the pandemic to “outright expansion,” and his firm had built up Chinese holdings in the past six months. For balanced mandates, or portfolios that span equities, bonds and other assets, it has a 10% reference position in Chinese onshore shares, Hong Kong stocks and Chinese hedge funds, he said.

Kevin Anderson, head of investments for Asia Pacific at State Street Global Advisors, said many Chinese companies merited attention from global investors, regardless of political tensions with the U.S. and even sanctions limiting investments in some firms.

He cited sectors such as online education, e-commerce and other technology-centered businesses, as well as trends such as China’s growing middle class, and its increased spending on cutting-edge technological research. “We’re focused on China because of its resiliency and the potential for earnings to be delivered,” he said.

—Xie Yu contributed to this article.

BlackBerry, AMC and Other Reddit YOLO Favorites That Aren't GameStop