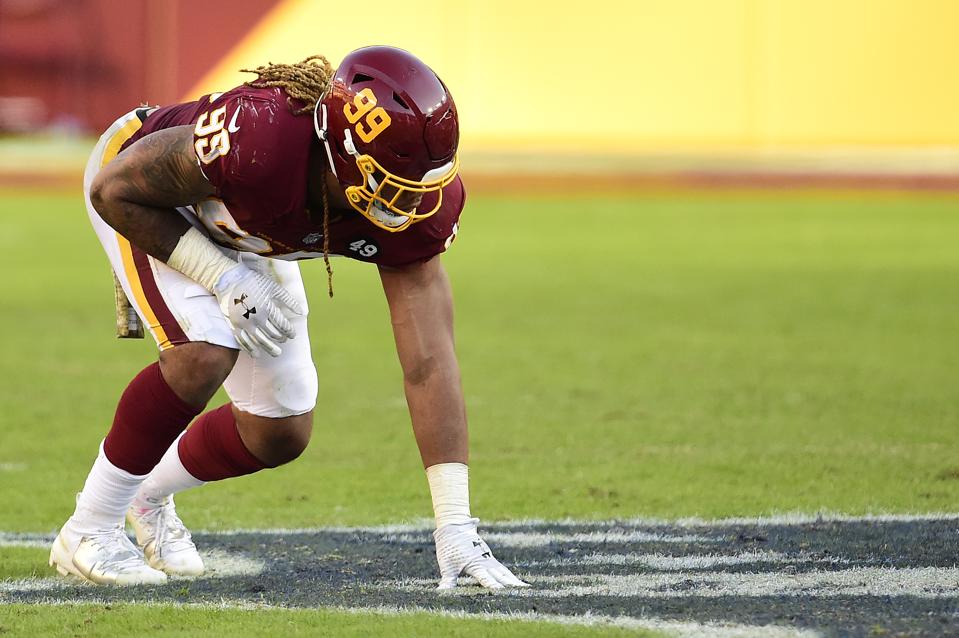 Chase Young was called for roughing the passer in the game’s final minute, helping the Lions to set … [+] up a game-winning field goal.

Washington Football team defensive end Chase Young made headlines following the team’s last-second 30-27 loss to the Detroit Lions Sunday, but he is not the story.

After quarterback Alex Smith led the team down the field in an efficient 66-play drive to set up a 40-yard field goal by Dustin Hopkins that knotted the score at 27 with 21 seconds left, Washington appeared poised to walk away with at least a tie. In the lowly NFC East, where the Philadelphia Eagles lead the division with a 3-5-1 record, a tie has the potential to make a crucial difference in the standings.

But with 12 seconds left in the game and on the Detroit 35-yard line, Matthew Stafford missed receiver Quintez Cephus. A flag was thrown. Roughing the passer. Number 99, Chase Young.

After advancing to the 50-yard line, Stafford completed one more nine-yard pass to set the Lions up in (long) field goal range. Matthew Prater did the rest, converting a 59-yard field goal as time expired to give the Lions a walk-off win at Ford Field.

As the Football Team dropped to 2-8 and fell to last place in the NFC East, the story is the same as it has been throughout the entire season. The Washington offense did not come alive until the second half. The Football Team missed chances and gave away opportunities. They did not finish the comeback veteran Alex Smith started in the second half. Young made a mistake in the final moments, but Washington should not have allowed the game to be as close as it was.

“We played inconsistent more than we did anything else,” head coach Ron Rivera said after the game.

The inconsistencies began in a frustrating first half of play.

On Washington’s first drive of the game, Smith led the team all the way down to the Detroit 24-yard line. But a sack by Romeo Okwara pushed the Football Team back to the 38-yard line and out of field goal range.

At 8:06 in the second quarter, the Football Team positioned themselves in field goal territory at the Detroit 25-yard line. Hopkins missed the 43-yard kick wide right and Detroit continued to hold a 14-3 lead.

In addition to failing to convert on potential scoring opportunities, Washington sacrificed points. With 1:21 left to play in the first half, the Football Team had the ball at the Detroit 33-yard line on first down. Smith completed a short pass to Terry McLaurin, but he fumbled the football and it was recovered by Detroit’s Jamie Collins. Stafford led his team down the field, setting up a successful 53-yard field goal by Prater with 13 seconds left.

On a total of four drives inside the Lions’ 30-yard line, Washington came away with only one field goal in the first half. The defense was on the field for just 9:29, but still allowed 17 first-half points as Detroit averaged 7.7 yards per play.

Smith shook his head in his postgame press conference when asked about the frustrations of the first half.

“I couldn’t believe…” Smith began. “Honestly I was stunned with what happened, looking up and we only had three points…It was hard to swallow.” 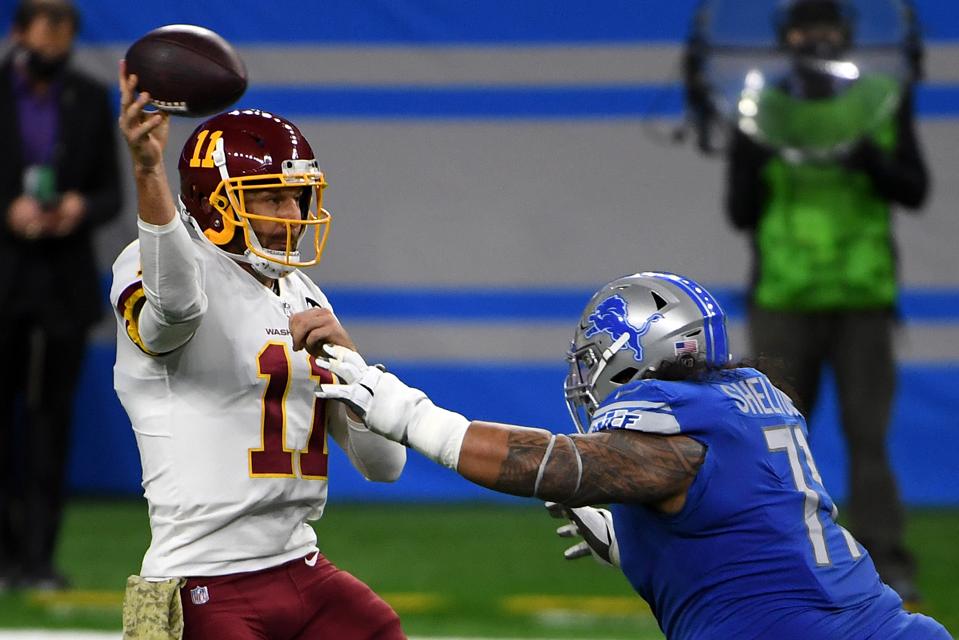 But there is arguably no better person in the league to lead a comeback than Smith, who started his first game Sunday since suffering from a gruesome leg injury on Nov. 18, 2018. He finished the game 38 of 55 for 390 yards – marking his second straight 300-plus yard game. The three interceptions he threw in relief of Kyle Allen in Week 9 against the New York Giants drew skepticism. But Smith did not turn the ball over once Sunday against the Lions. He led Washington to 17 second-half points last week and 20 more second-half points against the Lions. In both cases though, Washington fell three points short.

Though Smith’s final drive down the field allowed the Football Team to tie the score, there were missed opportunities scattered throughout. After completing a 26-yard pass to McLaurin and a five-yard throw to running back J.D. McKissic, Smith threw eight straight incomplete passes. A defensive holding penalty on the Lions was the only reason the drive stayed alive.

Washington had dug themselves in too deep of a hole in the first half and never managed to find a way out. Blame will be placed on Young, but Rivera called it a teachable moment for the former No. 2 overall pick.

“It’s unfortunate and he’ll learn from it,” Rivera said.

Blaming Young for Sunday’s loss is the easy road to take because many were at fault and many weaknesses were exploited.

“It’s never usually one thing,” Smith said of the loss. “It’s a 100 little things that add up. We can all be just a little bit better in a ton of different areas and oftentimes, that’s what turns the tide.”

In this way, Detroit did not so much win the game as Washington lost it.

“I thought we played well enough to win,” Rivera said. “It’s just unfortunate that it didn’t work out that way. We left nine points out on the field and we gave them three.

“I tell the guys, you can’t play against two teams on Sunday.”