In volatile markets, you can use cash as offense or defense.
MicroStrategy Inc.,
which recently had half-a-billion dollars in cash sitting around, thinks it can do both.

The company could have gotten rid of its excess cash by paying a big dividend or by buying back much of its stock. Instead, MicroStrategy bet half its total assets on bitcoin. So is this a publicly traded company or is it a hedge fund?

This foray into digital currency puts an old paradox of investing in a new light. As the great financial analyst Benjamin Graham observed long ago, the better a company is at producing goods and services, the more likely it is to pile up more cash than it needs to sustain the business. Why keep that surplus cash locked up and idle when investors could put it to better use elsewhere?

Most shareholders and corporate executives weren’t bothered much by excess cash when it yielded 5% or more. Now that yields are near zero, investors need to pay attention: When cash is trash, the pressure to take unprecedented risks with it is likely to rise.

MicroStrategy, based in Tysons Corner, Va., sells technology that enables businesses to analyze internal and external data. With software and services so cheap to produce and provide, the company keeps piling up cash.

MicroStrategy’s revenues have barely grown over the past decade, from $455 million in 2010 to $486 million last year. Yet the company finished 2019 with $566 million in cash and short-term investments, up from $174 million a decade earlier. Even after shelling out $425 million for bitcoin and $61 million for stock buybacks since August, MicroStrategy still has $53 million in cash.

And the shares had been stagnant for years.

MicroStrategy had been one of the hottest stocks in the technology boom of the late 1990s, returning 567% in 1999. The company lost more than 90% the next year amid a Securities and Exchange Commission investigation into its accounting. MicroStrategy restated its financial results and settled administrative reporting charges, without admitting or denying them. 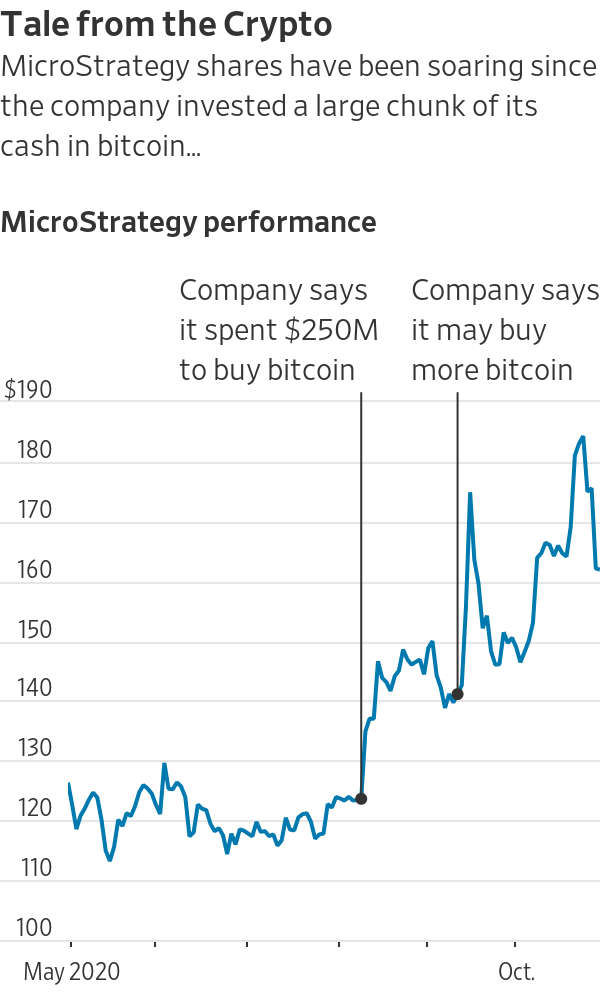 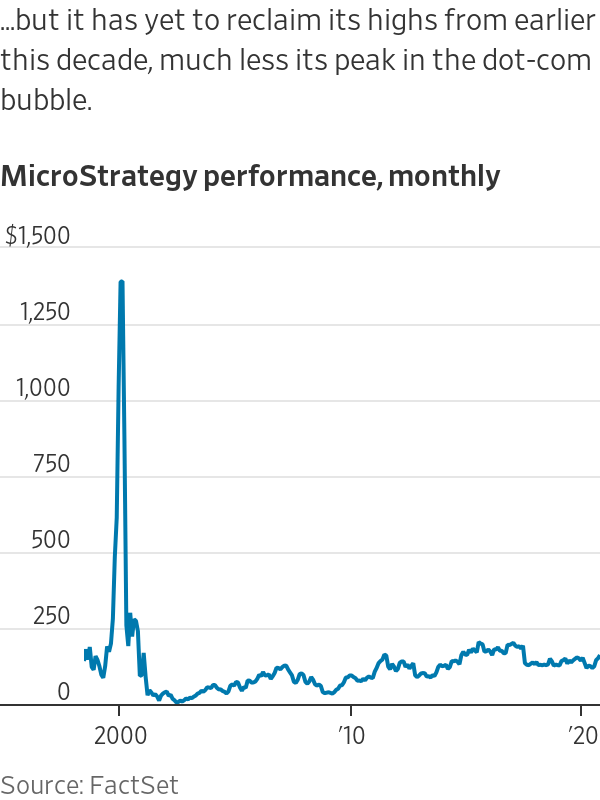 Three managers, including Chief Executive Michael Saylor, also settled civil accounting-fraud charges with the SEC. The executives didn’t admit or deny the charges; Mr. Saylor disgorged more than $8 million and paid a $350,000 penalty. When we spoke this week, Mr. Saylor, who is still CEO, declined to discuss the case.

MicroStrategy never recovered its lost glory. From its initial public offering in June 1998 through the end of 2019, the stock returned an average of 1.4% annually. Over the same period, the S&P 500 gained 7.2% annualized, including dividends.

But 2020 has been a whole new story. In August, when MicroStrategy announced it had invested $250 million in bitcoin, the stock jumped 9% in a day. A month later, the company declared that it would continue to put most of its excess cash into bitcoin. The stock rose 23% in two days.

At their peak on Oct. 23, the company’s shares had doubled in price since their low in early March.

MicroStrategy’s Mr. Saylor says the primary objective of buying bitcoin isn’t to make the stock go up, but to keep the company’s purchasing power from going down.

Thanks to the Federal Reserve’s immense intervention in the economy, the U.S. monetary supply is soaring—by one measure, up more than 20% this year. Mr. Saylor expects that pace to continue at 10% or 15% annually, not just in the U.S. but globally.

Of course, even as the monetary supply has doubled since late 2008 the Fed has struggled to lift inflation, as officially measured, anywhere close to 2%. While financial assets have soared and some items in the real economy have become more costly, many others have stayed flat or gotten cheaper.

Because the quantity of bitcoin is limited to 21 million, the digital currency can never be “debased,” Mr. Saylor argues, and is therefore bound to hold its value over the long run.

What is the most unusual shift in strategy you have seen a company make? Join the conversation below.

I asked if Mr. Saylor was nervous about putting so much of his company’s capital into such an asset.

“What would I be nervous about?” he shot back. “If I had $500 million in cash, that would make me nervous because I think it would go to zero [in purchasing power] over five years. So what’s my choice? I think bitcoin is better than gold as a store of value.”

He added, “It’s not perfect, there’s risk. But I can’t find anything better, and the option of doing nothing is more risky.”

However, MicroStrategy is no longer just a software company. Now it’s a bitcoin bet. Investors who wish to buy bitcoin could always do so themselves with the proceeds of a dividend or share buybacks. The point of buying a stock is to get a stake in a business, not to take a flier on cryptocurrency.

Write to Jason Zweig at intelligentinvestor@wsj.com

More from The Intelligent Investor