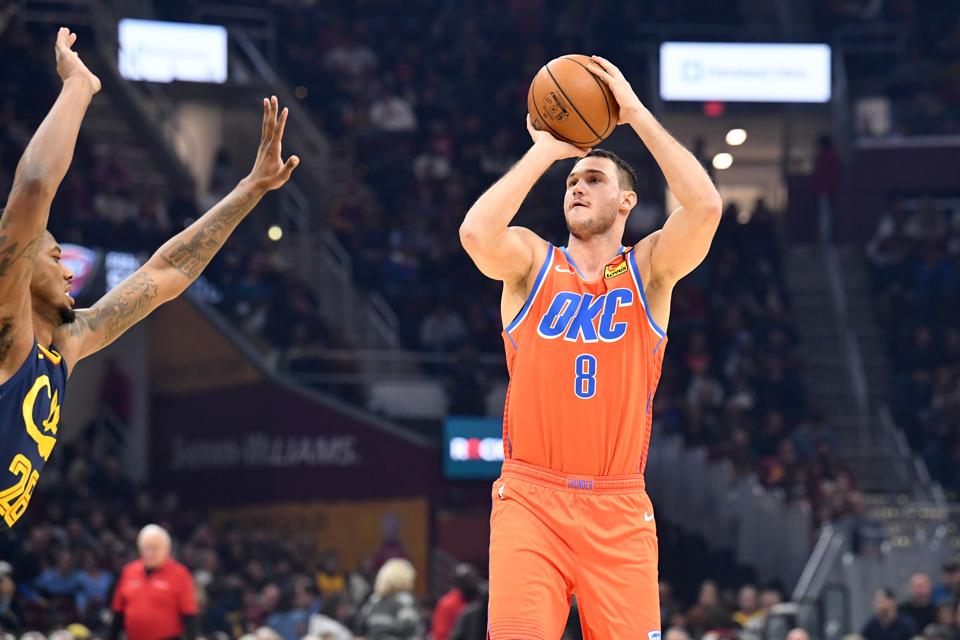 CLEVELAND, OHIO – JANUARY 04: Danilo Gallinari #8 of the Oklahoma City Thunder shoots over Alfonzo … [+] McKinnie #28 of the Cleveland Cavaliers during the first half at Rocket Mortgage Fieldhouse on January 04, 2020 in Cleveland, Ohio. NOTE TO USER: User expressly acknowledges and agrees that, by downloading and/or using this photograph, user is consenting to the terms and conditions of the Getty Images License Agreement. (Photo by Jason Miller/Getty Images)

Until Giannis Antetokounmpo decides whether or not he wants to sign a supermax with the Milwaukee Bucks, he’ll be hogging almost all of the NBA free agency spotlight. However, there’s another free agent available that just might be able to cause a league-wide shift in power, and he isn’t even a superstar. His name is Danilo Gallinari.

Last season, Gallinari averaged 18.7 points and 5.2 rebounds per game for the Oklahoma City Thunder, and he did so while shooting 40.5 percent from the three-point line. The 32-year-old has always been an outstanding perimeter threat, especially considering the fact that he’s 6-10 and has the size required to play both forward spots — and some center, in a pinch. But Gallinari has a lot more in his bag than just a jumper, even if it doesn’t exactly pop when he’s on the floor.

Throughout his career, Gallinari has flashed a unique ability to get himself to the charity stripe, as he is surprisingly nimble for his size and uses a lot of slow, jerky movements to draw contact on his way to the basket. This makes Gallinari a better isolation player than people think, but that can be said about almost every part of his game. There just isn’t a whole lot that he can’t do on the offensive end. In fact, according to Synergy Sports, Gallinari is at least “very good” at nearly every offensive category there is. That includes post-up opportunities, where Gallinari is a perfectly adequate threat if it’s late in the shot clock and your team needs somebody to go and get a bucket. Considering he’s not awful on the defensive end, all of these skills make him one of the few prizes in this weak free agent class.

There will be a number of competitive teams lining up to bring Gallinari into the mix this offseason. The Italian would likely be able to snag a contract that pays him around $16-17 million annually if he wanted to, but Gallinari has already made it clear that winning is a factor at this point in his career. If he is truly willing to take a pay cut, all sorts of options are on the table, as there a bunch of teams that can at least offer him the standard mid-level exception, which would pay him just over $9 million next season. However, teams should really be preparing as if it’ll take something in the $12-14 million range.

Still, with a lot of teams having the ability to afford Gallinari’s services, he should have some very nice options to choose from when the phones start ringing in a couple of weeks. Here are a few of the landing spots that I think make the most sense:

Green Bay Packers Vs. Jacksonville Jaguars: Who Has The Edge?

NFL Week 10 Picks: Odds And Expert Predictions Against The Spread

The Heat nearly acquired Gallinari at last season’s trade deadline, but Gallinari wanted an extension that Miami wasn’t willing to give him. It’s no secret that Pat Riley feels his team has a good chance at landing Antetokounmpo, so he has been reluctant to add any salary to the books. But if the Greek Freak decides to stay in Milwaukee, Miami would likely change course and try to add to last season’s group. It’s not all that crazy to think that the Heat might have won the title with Gallinari adding another scoring threat to a team that desperately needed one.

Erik Spoelstra is masterful when drawing up plays to get his shooters open, and Miami’s spacing would be absurd in lineups that feature Gallinari, Duncan Robinson and Tyler Herro. Gallinari would also be a nice pick-and-roll partner for Goran Dragic, if the Slovenian is back with the Heat next season.

According to numerous reports, the Suns seem like they have a good chance of getting Chris Paul from the Thunder. Phoenix is banking on Paul having the same impact that he did for Oklahoma City last season, serving as a mentor for the team’s young players while also making them a lock to make the postseason. Well, the Suns are also looking to bring in another power forward, and it wouldn’t be all that surprising if Gallinari decided to join Paul in Phoenix.

With a lineup of Paul, Devin Booker, Mikal Bridges, Gallinari and Deandre Ayton, the Suns would have one of the best starting fives in basketball, and they’d also have sharpshooter Cameron Johnson off the bench. That has the look of one of the four best teams in the Western Conference, and the ceiling is even higher, as guys like Bridges and Ayton have another level they can reach.

How does a five-man unit of Stephen Curry, Klay Thompson, Andrew Wiggins, Gallinari and Draymond Green sound? Well, the Warriors have a trade exception that would allow them to acquire a guy like Gallinari in a sign-and-trade situation, or they can give him the mid-level exception.

Golden State already looks like a team that is ready to contend in the 2020-21 season, but the Warriors are looking for some more help. They do have the second-overall pick in the NBA draft, but they are rumored to be trying to acquire a veteran that they know can contribute right away. Adding Gallinari to this core could be downright lethal, as the Warriors already have two of the best shooters in the history of basketball, and Gallinari would feast on the open looks that Curry would be able to create for him.

The Raptors performed a lot better than people thought they would without Kawhi Leonard last season, as they were still one of the best teams in the Eastern Conference. Toronto does have some decisions to make this offseason, especially with regards to Fred VanVleet, but Masai Ujiri could ultimately decide that his team is simply too good not to run it back. If that is the decision he makes, the Raptors would be wise to pursue Gallinari.

In the playoffs, Pascal Siakam proved that he’s not yet capable of being the top scorer on a contender, so the Raptors definitely need some help on the perimeter. Gallinari would be an excellent piece, as his ability to shoot and get to the basket would make their half-court offense a lot stronger. He’d also be covered on the defensive end, where he’d be surrounded by guys like OG Anunoby and Siakam, who can handle the more difficult assignments.