BlackRock Inc.
planned to shake up the private-equity world with a $12 billion fund. Now the asset-management giant is setting its sights lower.

BlackRock’s staffers conceded the target was unrealistic after struggling to meet fundraising goals. The firm’s staffers hope to grow the fund to between $4 billion and $6 billion in assets over time, people familiar with the matter said.

Best known for funds that track broad markets and trade on exchanges, BlackRock launched fundraising for a strategy in 2018 to make direct, long-term investments in private companies. The fund was an aggressive gambit to take on private equity’s big league deal makers.

Private markets are one of the few corners of finance untouched by fee pressures that have pulled the cost of investing closer to zero. But it is hard to build a presence from scratch. Many asset managers face challenges replicating their reach over stock-and-bond markets in the complex, labor-intensive business of investing in privately held companies.

So far, BlackRock has raised less than one-third of its original goal—$3.4 billion, as of the end of 2020, according to people familiar with the matter. BlackRock, which had an initial year-and-a-half window to raise money for the fund, missed internal fundraising deadlines and asked investors for a few more months to seek money, according to some of the people familiar with the matter. Now BlackRock can’t raise further money until 80% of that money is invested, fund documents dictate.

Firm executives have told investors BlackRock is committed to the fund. 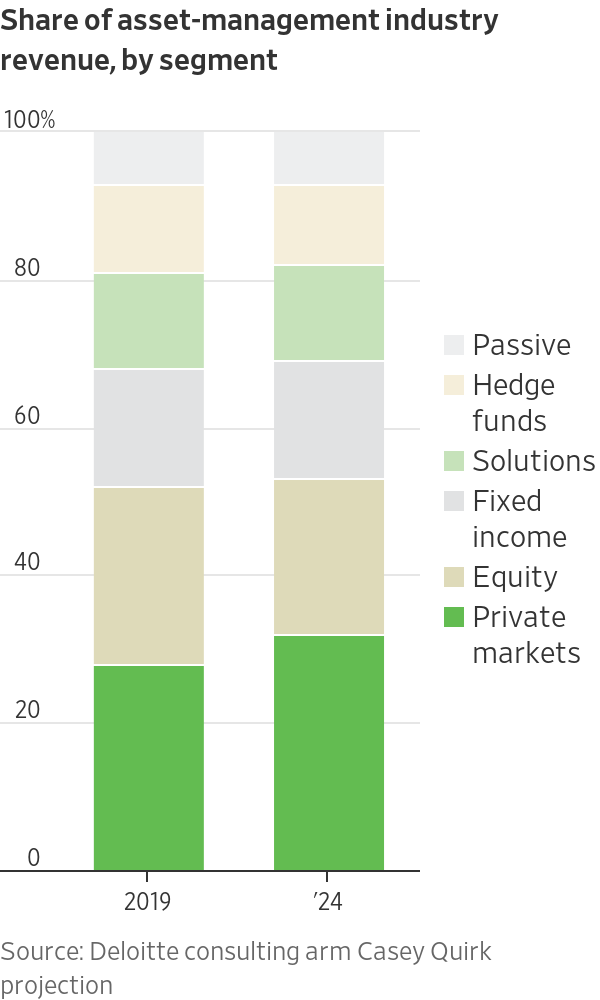 “As one of the largest first-time private equity funds ever, we look forward to investing in and working with more companies seeking a long-term strategic partner to help them grow their business,” said

In 2019, the fund bought a stake in Authentic Brands Group, which owns brands including Sports Illustrated and Nine West. It invested in a luxury perfume maker in 2020.

Larry Fink
has pushed the firm with $7.8 trillion in assets to grow its illiquid alternatives business. BlackRock’s illiquid alternatives franchise has roughly $80 billion invested across infrastructure, credit and other strategies in hard-to-trade wagers. This business punched above its weight, delivering 4% of the firm’s fee revenues in the third quarter even while accounting for 1% of assets. The business has grown as pensions and endowments hunt for returns in a low-interest era.

However, BlackRock’s experiment in private equity has been a tough sell.

The fund was structured differently from traditional private-equity funds that exit bets and give investors their money back within a set period of time. Some institutions balked at tying up money in BlackRock’s fund with no deadlines for returning investor money or a proven track record. Some investors asked BlackRock to settle for more modest fundraising goals.

Mark Wiseman,
hoped that a selling point of the fund was that fees would fall as it got bigger. BlackRock found it harder to attract new investors after Mr. Wiseman was pushed out of the firm in late 2019 for failing to disclose a relationship with a subordinate. Investors questioned if the team would stay together.

Mr. Bourbonnais, the executive leading the fund, was a top candidate in 2020 for the top job at Canadian pension fund giant Caisse de dépôt et placement du Québec, said people familiar with the matter. He remained at BlackRock.

When the pandemic struck, it was tough getting pensions excited about untested strategies.

What’s the future of BlackRock’s private-equity ambitions? Join the conversation below.

Despite missing the $12 billion fund target, BlackRock was still successful in raising over $22 billion for illiquid alternative projects in the year ended September 2020, a person familiar with the matter said.

A group led by former
Goldman Sachs
investors is on track to raise in excess of its $1.5 billion target by early 2021 to buy secondhand fund stakes. BlackRock sealed $5.1 billion in 2020 for a fund to invest in power plants and energy infrastructure.

“As clients are increasing their exposure to private markets, we have raised record amounts for our illiquid strategies over the last year across private credit, real assets and private equity,” said

To knit staffers more closely to the success of the alternatives business, BlackRock is in early discussions over new ways for professionals to share in profits typically reserved for select executives, investment staff and firm shareholders for future funds, people familiar with the matter said.

Write to Dawn Lim at dawn.lim@wsj.com