Enlarge / Large flock of jackdaws in silhouette flying in the evening sky over the trees.
iStock / Getty Images Plus
There’s rarely time to write about every cool science-y story that comes our way. So this year, we’re once again running a special Twelve Days of Christmas series of posts, highlighting one science story that fell through the cracks in 2020, each day from December 25 through January 5. Today: why flocks of jackdaws will change their flying patterns depending on whether they are returning to roost, or banding together to drive away predators.

Flocks of wild jackdaws will change their flying patterns depending on whether they are returning to roost or banding together to drive away predators, according to research originally slated to be presented at the 2020 APS March Meeting, which was cancelled due to the coronavirus pandemic. The work builds upon earlier findings published in a November 2019 paper in Nature Communications. This could one day lead to the development of autonomous robotic swarms capable of changing their interaction rules to perform different tasks in response to environmental cues.

Co-author Nicholas Ouellette (no relation), a physicist-turned-environmental engineer at Stanford University, has long been fascinated by biological swarms after noting how flocks of starlings in flight formed unusual patterns that, to his physicist’s eye, looked a lot like turbulence. He thought there must be underlying mechanisms behind the formation of those patterns—possibly even a set of universal laws that could apply to collective behavior across different species.

The sticking point is that, despite the ubiquity of flocking and swarming in nature, each species flocks or swarms a little bit differently in terms of the underlying mechanisms at work. Ouellette himself is careful to distinguish between “flocking” and swarming,” although the terms are often used interchangeably. For him, “flocking” pertains to net ordered motion, while “swarming” applies to collective motion that lacks net overall order.

Research into swarming and flocking was largely relegated to observational biologists for decades. But in the 1980s, a computer graphics specialist named Craig Reynolds developed the so-called “boids” program, an agent-based computational model that has dominated collective behavior studies ever since. In such a model, each individual unit in a swarm is a dot moving in a straight line a constant speed. By introducing a few simple rules regarding interactions between dots, a flocking pattern will emerge once the dots get dense enough. Another set of rules will produce a swarming pattern, and so forth. 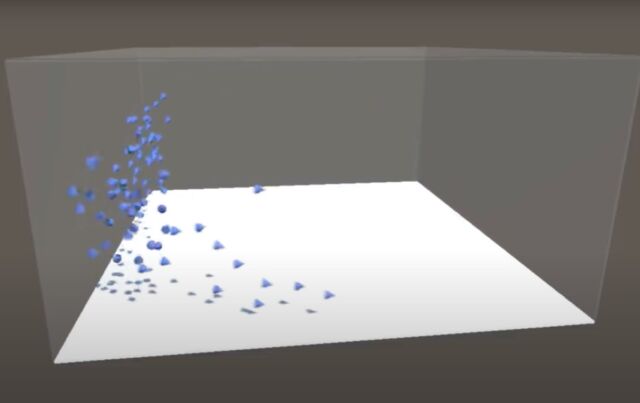 Ouellette thinks this approach is not sufficient to truly understand what’s going on at the most fundamental level. Computer simulations might be able to produce patterns that resemble flocking and swarming, but that doesn’t mean this is how various species actually behave in their natural habitat. You still need old-fashioned observational data from field work. So he has opted for a dual approach, adding a big-picture, hands-on experimental component to the standard particle modeling and statistical mechanics.

I covered Ouellette’s experiments with swarms of midges for Physics World back in 2018. He treats his swarms of midges like chunks of material, poking and prodding that material to measure its response. That means manipulating environmental conditions in the laboratory to see how the swarms respond. He and his team used high-speed cameras to determine the position, velocity, and acceleration of each midge, then used a particle-tracking computer program to recreate individual trajectories. The hardest part is analyzing the data to extract large-scale swarm features from the noise.

Ouellette used the same basic set-up for his work on jackdaw flocks, except this time the cameras were outdoors and outfitted with longer-range lenses. He partnered with Alex Thornton—a biologist at the University of Exeter in England, who has been studying jackdaws for many years with the Cornish Jackdaw Project—to collect the observational data by filming wild jackdaws in Cornwall, England. 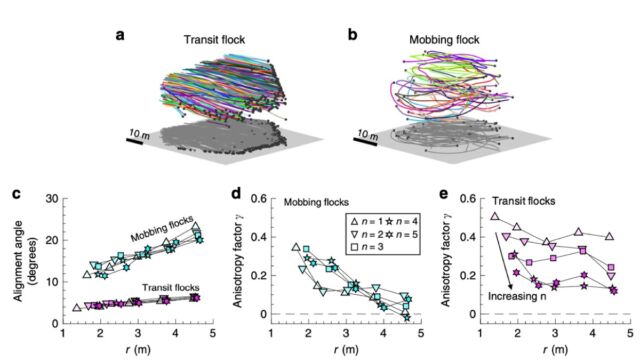 Ouellette and his collaborators recorded 16 flocks and identified two different varieties. Transit flocks form when the birds fly home to their roosts at night, while mobbing flocks occur when the birds band together to ward off predators like falcons or foxes. “A falcon definitely wins in a one-on-one dogfight between a falcon and a jackdaw,” Ouellette told Ars. “But a hundred jackdaws probably beat a falcon.” The researchers initiated mobbing by presenting the jackdaw flocks with a stuffed fox holding a fake flapping bird in its mouth. They also played recordings of the scolding calls jackdaws commonly use to alert their neighbors to the presence of a predator and call them to action.

Jackdaws are a member of the corvid family, like crows. “All corvids are smart, and all corvids have fairly well-developed social systems, in addition to the collective behavior and flocking,” Ouellette said. Jackdaws also mate for life, and those pairs form a kind of substructure beyond just individual birds and flocks. They nest and rear their young in the late spring and summer. During that period, one half of a mated pair will remain in the nest with the offspring, while the other will forage for sustenance. As a result, large jackdaw flocks rarely form. By winter, the chicks have fledged, so there is no reason for pairs to separate, and big transit flocks generally form.

His camera tracking system enabled him to determine which birds in a flock were paired up and the fraction of paired birds, compared to solo birds. Given that structure, Ouellette wondered if it would be possible to tell the difference between a flock that contains pairs versus one that doesn’t. The group found that, in transit flocks, the jackdaws position themselves by monitoring how many neighbors are close to them—a set number of birds (usually seven or eight), regardless of the distance between them. But in transit flocks with a high proportion of pairs, the interaction of distance was smaller (usually around three neighboring birds).

In contrast, mobbing jackdaws would orient themselves solely by maintaining a specific distance from other birds. “[Mobbing] flocks are interacting with neighbors based on physical distance, not based on counting,” Ouellette said. And mobbing flocks no longer show any pairing, probably because both partners in a pair are unlikely to be drawn from the nest to join the mob.

Jackdaws form disordered mobbing flocks at first, but once a critical mass of birds is reached, the mob transitions to order.

In the mobbing flocks, Ouellette and his collaborators also noted that a phase transition occurred—the emergence of order from chaos—when the flock density, or number of birds, crossed a critical threshold, which had never been observed before in birds. (See embedded video above.) Small mobbing flocks were disordered, suddenly flipping to an ordered state once the number of birds crossed the critical threshold. In contrast, the transit flocks maintained order regardless of the size and density of the flock. “You get the flock dense enough so that enough of them are interacting with each other and the individuals will spontaneously develop polarization, all moving in the same direction,” said Ouellette.

“Our results demonstrate that local interactions vary considerably even within the same species in different ecological contexts,” the authors wrote in their 2019 paper. “Rather than being limited to fixed interaction rules, animals may adjust their response to neighbors in different contexts to robustly optimize their group function and maximize fitness benefits.”

“One of the real takeaways here is that you can take the same animal with the same social structure and you put them in two different contexts,” said Ouellette. “They behave collectively in both cases, but the way they do it is not at all the same. It’s not as simple as saying ‘There are flocks and this is the way flocks work.’ So you cannot ignore the external environment in trying to model collective behavior in biological systems.”

Man who punched cop during Capitol riot has brother in